Seventy-one climate change protesters have been arrested after parts of the M25 were blocked off by activists for the second time in three days, causing huge queues of traffic.

Protesters from Insulate Britain, which included an 82-year-old man, brought traffic to a halt at several sections of Britain’s busiest motorway on Wednesday morning.

The demonstrators targeted Junction 23 for South Mimms in Hertfordshire, as well as the main carriageway from Junction 8 at Reigate to Junction 9 at Leatherhead, both in Surrey.

Surrey Police said it worked with the Metropolitan Police to deal with the protesters, making 32 arrests.

The force added it was also dealing with a road traffic collision at Junction 9 of the M25 involving four vehicles. Police, fire service and ambulances are currently on the scene.

It advised motorists to avoid the area if possible. 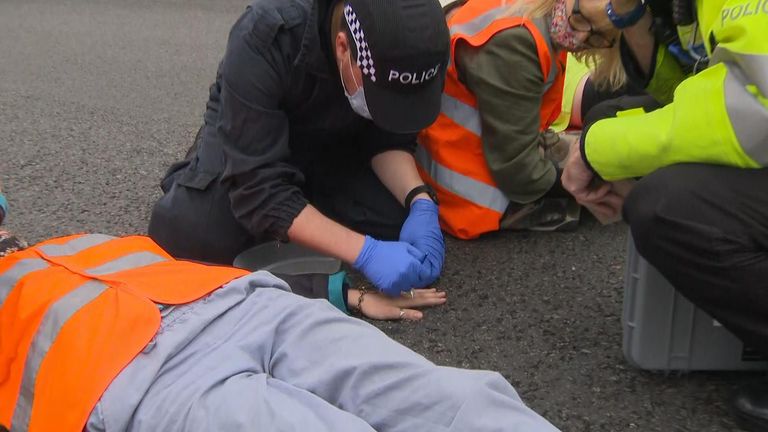 Protesters glue themselves to M25

Superintendent Adam Willmot said: “Our officers were on the scene within minutes of us being alerted to the protest, and attempted to engage with the group, working to balance the rights of people to protest with the rights of those affected by their presence.

“However, protestors ignored repeated requests from officers to move to a safer and less disruptive location, and alleged that they had glued themselves to the Tarmac, making it clear that their aim was to cause as much disruption as possible.”

Kent Police said it arrested 21 people for obstructing the highway.

So far we have made 11 arrests and removed protesters.

The environmental group is demanding government action on home insulation, tweeting: “#InsulateBritain are back. @BorisJohnson can you hear us yet?”

The group added that 89 members took part in the demonstration on Wednesday.

Local news media reported that Princes Road in Dartford, Kent, is partially blocked with queuing traffic due to a demonstration on the roundabout at Junction 1B of the motorway, causing congestion on the approach to the busy Dartford Crossing.

One Twitter user, Phillip Marvel, observing a blockage near the crossing, said the protesters were “at it again”, adding: “Children stuck on school buses, ambulances can’t get through. This is not helping their cause.”

Business Secretary Kwasi Kwarteng commented: “These actions are not only highly disruptive to those going to work and transporting vital goods, but are putting lives at risk on a busy motorway.

“Not to mention the resulting traffic delays will only add to vehicle emissions.”

Edmund King, president of motoring insurance group AA, said a thermal insulation engineer was prevented from going to work after being stuck in the traffic queue during Wednesday’s blockade.

He said: “Whilst most people understand the need to take action on climate change, these motorway blockade tactics are just backfiring as they are alienating the working public stuck in this chaos and subsequently pumping out more emissions.

“It is somewhat ironic that thermal insulation engineers trying to insulate Britain were stuck in the congestion caused by Insulate Britain.”

He added: “Essential deliveries, emergency services, people missing hospital and business appointments are all hit by these blockades. Hopefully the police will take immediate action to unblock the arteries of Britain.”

“Proper jobs for hundreds of thousands of people to start the first real step – to insulate all the homes of this country – which pound for pound gives us the biggest reduction in carbon emissions.

“It is a total no-brainer and yet this government refuses to get on with the job. This is criminal negligence.”

On Monday, the group blocked off five junctions of the M25 with another demonstration, resulting in tens of thousands of drivers being stuck in huge queues of traffic and some 78 people arrested.