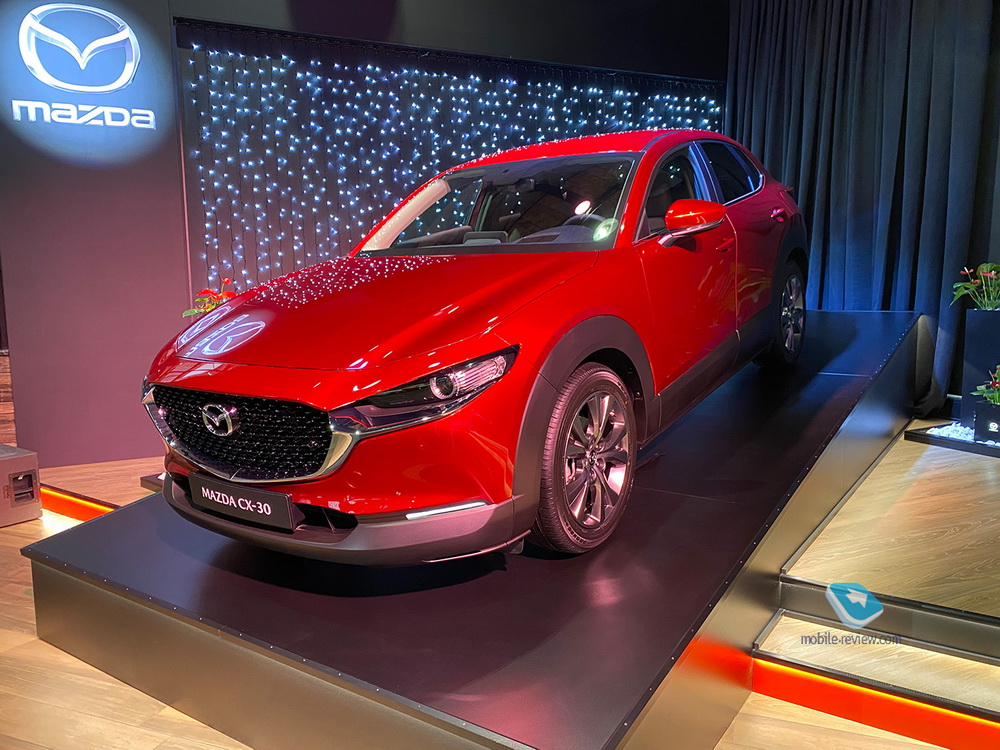 The official Russian presentation of the new Mazda CX-30 compact crossover took place this week. The car of the Japanese manufacturer is already on sale in Europe and in some other markets, but our official sales will begin only from January 15, 2021.

The compact crossover is in many ways similar to the Mazda 3 hatchback, which we have already talked about, this is no wonder, since the CX-30 is built on the platform of the latest generation of “treshki”. Despite the external resemblance to a passenger car, the novelty is still slightly different, the designers of the Japanese brand have completely redrawn the stern of the crossover, so that it is now not as heavy as that of the Mazda 3, and the overall appearance of the car has become more harmonious and visually light. Yes, if the front of the SUV can still be confused with the passenger version, then you can immediately see the differences from the side and rear. In general, the Mazda CX-30 turned out to be pretty, I liked it the most in the corporate red color, however, you have to pay extra for it. To emphasize that the model belongs to crossovers, the manufacturer added a skirt made of unpainted plastic at the bottom, so it will not be scary to storm the snowdrifts, and also increased the ground clearance to 180 mm. It is clear that no one will climb off-road in an urban crossover, but at the same time, you can not be afraid of snow-covered roads in a car, and it is possible to drive off the asphalt without much fear. Inside, the similarity of the Mazda CX-30 with the Mazda 3 is much greater than outside, even the landing in the crossover remained light. The interior design is fully consistent with that of the hatchback / sedan, the same multi-layered front panel with a widescreen 8.8-inch display of the media system, the same comfortable steering wheel with control keys on it, even the same seats, hard, with the correct profile, but a short cushion. The differences lie in small details like transitions from the front panel to the door and a slightly different front armrest with a large niche in it. I visually like the interior of the new Mazda, besides, the Japanese manufacturer has changed its strategy and is now aimed at the premium segment, so the materials here are only of high quality, these are soft plastic and leather, and all the parts are neatly fitted. Yes, below the line of sight, you can already feel the hard plastic, but these are the places where the owner will climb, if only with the direct intention of feeling everything and everyone.

With a height of 187 cm, I calmly settled down behind the wheel, all the adjustments are enough with a margin, but I can only squeeze through myself, I won’t be able to sit down freely, although someone miniature may be able to accommodate there comfortably. The Isofix mounts are located at the back of the sofa and are easily accessible, so there is no problem installing a child seat. Yes, in the maximum configuration of the Supreme, the front seats will be electrically operated and a memory of positions for the driver’s seat; in simpler trim levels, everything must be done by hand. The trunk for an urban crossover is quite ordinary, 295 liters, so it will be enough to properly shop at the supermarket. Of the pleasant features of the Mazda CX-30, it is worth noting that already in the initial configuration of the Drive you will receive a media system with an 8.8 ”display and control with a convenient washer, similar to BMW, support for Android Auto and Apple CarPlay, 8 speakers, as well as a dashboard with a large color screen and head-up display. Also available at the start are 7 airbags, all major electronic driving assistance systems and LED headlights. In the more advanced set of Activе, which the Russian Mazda office relies on, in addition to this, there is an electric boot with the ability to immediately close the car, dual-zone climate control with a convenient adjustment unit, cruise control and some additional options. Additional packages are also available for certain configurations. In general, you can wind up the CX-30 to the fullest by adding a leather interior (in the base it is fabric), a panoramic roof and various electronic assistants. Yes, there are more driver assistance systems, these are not only cameras and parking sensors with a cross-traffic warning system, but also for the first time in Mazda the Start & Go system, which allows the car to move in the stream with a given distance and speed. This also includes a lane control system, which can independently return the car to the lane, and if the lane markings are unavailable, the system will be guided by the vehicle in front.

The Mazda CX-30 crossover will be available in three trim levels and retrofit packages. The engine is offered uncontested, two-liter SKYACTIV with a capacity of 150 hp. in combination with a manual or automatic transmission, in all-wheel drive and front-wheel drive versions. At the prices so far, only the cost of the Active configuration in front-wheel drive has been officially announced, which will cost 1 rubles. Prices for other modifications will be announced later, and sales of the Mazda CX-869 will begin on January 000 next year.