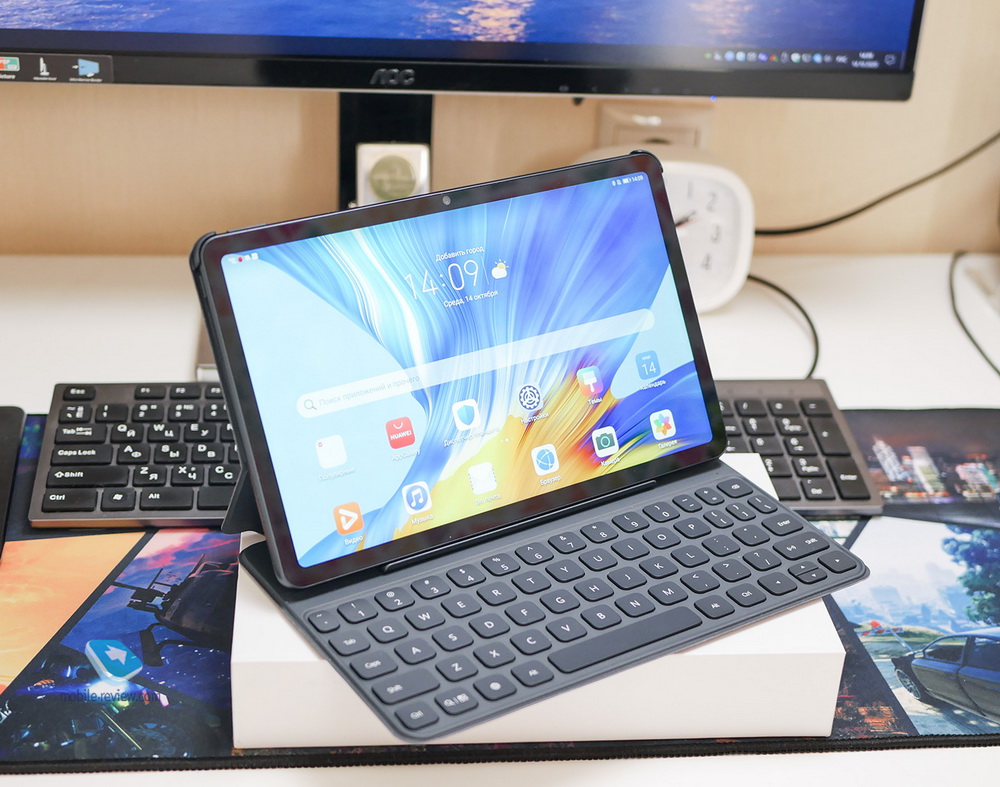 This fall, Honor began shipping its tablet called the Pad V6 to store shelves. Again the use of the word Pad, not quite clear lettering “V”. Is that the number 6 is logical, since last year there was an Honor Pad 5. True, I have not heard anything about it, but God bless him.

So, the new Pad V6 is the only modern tablet from the Honor brand. Before the announcement of the device, it seemed to me that the Pad V6 would be an exact copy of the Huawei MatePad Pro, since a mirror response usually occurs: the Huawei device rolls out, and a little later – an exact copy, only from Honor. But it turned out that it was not at all like that.

Another interesting feature is working with a clip-on keyboard and a stylus. They are purchased separately, but with a 50% discount.

We didn’t overdo it with the price either. Today the device can be bought for 30 rubles. The keyboard will cost 000 rubles, and the stylus – 4 rubles.

From the front, the Honor Pad V6 is a typical standard tablet. On the other hand, the designers decided something like this: one of the developers in Photoshop stretched out one of the Honor smartphones for fun, and the head of the department simply approved such a decision. It is completely incomprehensible why there is a protruding module with cameras on the back of the Pad V6. There is only one camera, and that one is 13 MP without magnification. All this is easily hidden in an 8 mm case. Congratulations, you just degraded the ergonomics of your product with an ugly hump on your back. Front side – glass with an average quality of oleophobic coating. The prints instantly cover the glass and are difficult to wipe off. The side edges are sloping and made of plastic. The back cover is also plastic. Has a pleasant gray tint. The structure resembles fine sand that plays in the light. The material is very durable: I couldn’t even scratch the cover on purpose. Here is an unambiguous offset.

The tablet is heavy considering the use of plastic, 475 grams. Well, the dimensions are usual: 154x245x7.8 mm. The screen bezels are the same along the entire perimeter and are about 9 mm. Also good. There are two speakers on the left and right. On the left is the power button, on the right is USB-C. There are two microphones on top, and a slot for a microSD memory card below. Yes, yes, I was not mistaken, this is not for the NM card. And one more interesting thing: a SIM card slot was originally provided in the microSD plate. Or perhaps they just took a ready-made element and blocked the slot.

On the back, as I already wrote, there is a camera, flash and another microphone. Total: quite a nice tablet with the usual dimensions, weight and other parameters. The brand itself calls the display 2K! And many are likely to buy this acronym. And this is only 2000 x 1200 pixels, that is, less than on the Honor 30 (2400 x 1080 pixels). In dots per inch, that’s 224 PPI. Backlight brightness at maximum is about 550 cd / m2. Viewing angles without distortion. Overall, the screen is good, but not the best. I missed a little more clarity in the interface, a little more contrast. In the settings there is an item “e-book mode”. When you turn it on, the display starts to transmit only shades of gray. It looks unusual. Another feature: Turn on or off “natural tone”. The screen changes temperature depending on the ambient light. I would enable such a feature. It would seem that a capacious battery is used here, the processor is optimized to the maximum, the brightness of the matrix backlight is typical for such devices. But the battery life saddened me a little.

For example, when playing a video, the battery is discharged in 7 hours, with toys it comes out no more than 4 hours. It seemed to me that I was “midshipman Krivoruchko”, but after reading reviews on other sites, I came to the conclusion that Honor Pad V6 really does not work for long. In general, the luminescence of the screen at auto brightness is about 4 hours. The device is charged for about 2 hours. There is no wireless charging or reversible charging.

Basically, everything is collected in the table above. I can’t single out anything interesting. The only nice bonus is working with the Wi-Fi ax. True, you need to have a high-speed network and an appropriate router in order to evaluate all the capabilities of Wi-Fi ax. By the way, you can find an overview of the Honor router with support for Wi-Fi 6 here.

For a tablet, the Honor Pad V6 cameras are very good. I liked the colors, the exposure, the adequate dynamic range, the relatively good sharpness, and the lack of frank soap in the evening.

The front camera is great: here you get both a wide angle and natural colors.

The tablet can record video to the main module in 4K resolution at 30 fps, FullHD at 60 fps. Selfie – FullHD 30 fps.

The Honor Pad V6 is only sold in one configuration: 6GB of RAM and 128GB of internal storage. These parameters are more than enough for this type of apparatus. That is, Honor has put a very fast memory in its new tablet.

The chipset in Pad V6 is Huawei HiSilicon Kirin 985. It was presented in April this year. For example, it runs Honor 30. You can read more about the processor here.

The tablet is very fast, completely non-braking and has smooth animation. If you compare the Honor Pad V6 with the Huawei MatePad T10s, then the latter will seem to you an extremely laggy device.

The Pad V6 instantly installs programs, quickly launches applications, there is no delay between switching windows. You really enjoy using your tablet.

Under the high load of the processor, the case of the device hardly heats up. In the Antutu test, the tablet scores 380 points. This is a very good result! Everything is very simple: the gadget is equipped with Google Android version 10, but the proprietary Magic UI 3.1 shell is stretched over the system – an analogue of EMUI 11.

There is no support for Google services. I used the Aurora Store to install the programs.

Here you can read about the new features of the shell system.

It is worth highlighting the presence of four speakers: two on the right and two on the left. It’s not quad, it’s stereo. The volume is high, the sound is clear, deep, watching movies and playing games is super! Even if you accidentally cover the lower speakers with your palms, the upper speakers will still be heard. The manufacturer does not say about the Harman Kardon setting. But in the MatePad Pro it was. And the sound is the same as in the Pad V6.

You can listen to music with 3.5 mm headphones using the included adapter. A somewhat perverse scheme, but quite real.

It is purchased separately. It costs 10 rubles. I think it’s just an unrealistically high price. Actually, this is probably why it is sold with a 000% discount when purchased with a tablet. The stylus fulfills 4096 levels of clicks. And the set includes four feathers with two types of stiffness. They are marked in red and blue. In general, the impression is that “we came up with an additional feature for the tablet, but implemented it as best we could”.

It charges very quickly: just 10 minutes is enough for an hour of work. The total battery lasts for 10 hours. Conditionally it consists of two parts: the back cover, to which the tablet is attached, and the keyboard. Equipped with a USB-C port and an on / off button. The keyboard has 14mm keys and the keys are 1.3mm apart. Unfortunately, I only had a keyboard with Latin characters in my review. When you close the halves, the tablet goes into standby mode. The cost is 8 rubles.

In my opinion, Honor has got the best tablet on all fronts:

But there is clearly something wrong with autonomy. Most likely, the matter is in a non-commercial sample and with the release of a new firmware, the manufacturer will fix everything. The absence of GMS is already the norm for Huawei / Honor. Otherwise, there are no questions.

I think if the tablet were set at a price of around 20 rubles, it would be the best bedside device for watching movies, reading information and fast surfing the net. There are few competitors, but they are serious: