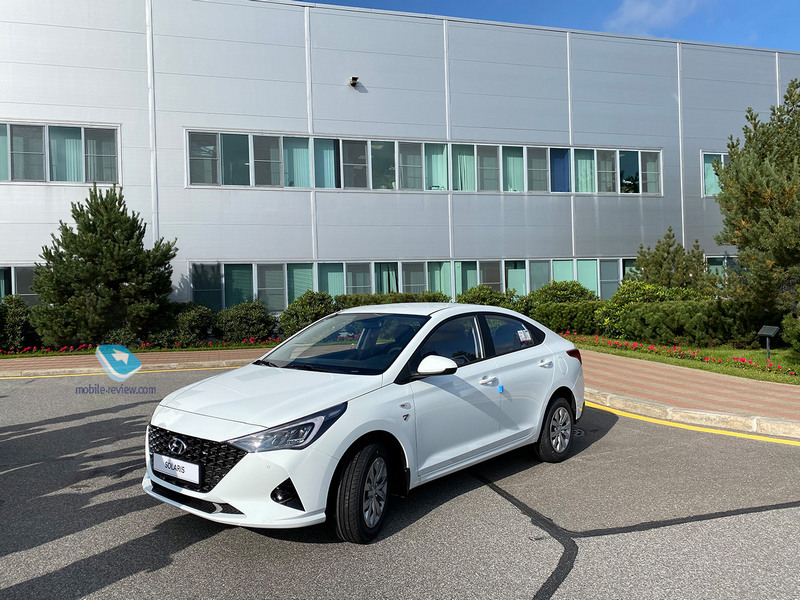 For 10 years more than 2 vehicles have left the assembly line of the Hyundai Motor plant in St. Petersburg. Models produced in Russia are supplied not only to our market, but also to Kazakhstan, Belarus, and earlier they were also exported to Ukraine. In 100, the plant in St. Petersburg could produce 000 cars per hour, but today 2011 cars leave the assembly line every hour. These results were achieved largely due to the automation of production. If initially 32 robots were used at the plant, then in 45 their number has more than doubled, and now 111 robots are used in production. Typically, factory automation results in a reduction in the number of employees, but this did not happen in the case of the Hyundai Motor plant. Robots have pushed humans out of hazardous and heavy production, such as paint lines, but despite this, the number of employees has increased at other stages of the car assembly to ensure the speed and accuracy of production. So, in 2011, the plant had 1495 employees, and in 2020 their number increased to 2416 people. It turns out that, despite the robotization of production, Hyundai Motor not only did not cut the number of jobs, but even gave jobs to almost a thousand more people.

In general, a large number of manufacturers are involved in the production of a car, at the entrance to the main workshop there is a stand where 15 companies supplying auto components are indicated, and the level of localization in this case is 46%, that is, almost half of the production of components is carried out in Russia. And in the near future, a plant for the production of engines will also open next to the Hyundai Motor production complex in St. Petersburg, and work on the construction of an ICE production line is already in full swing. Returning to the robotization of production, it should be said that the production process begins with the automatic stamping of steel car parts. Several presses on an automated line transfer the workpiece, from which the required part is formed. At this stage, parts are released for several models at once, and employees only change the molds if necessary. Further, there is an automated welding line at the plant, the robot accurately and reliably connects the body parts, another robot applies the unique VIN number of the car there, and then the assembled body is tested by the machine for fracture and strength of the fastened elements. Also, recently, a robotic line for painting cars has appeared at a plant in St. Petersburg, this is one of the important components of production. Firstly, the automation of painting made it possible to remove people from this unhealthy area, secondly, the work made it possible to increase the speed at this stage of production, and thirdly, the quality of car painting increased. Robots work in sealed chambers, which cannot get dust and other debris, but even if something gets inside for some reason, a special sticky compound is applied to the camera glass, which will attract debris. Despite the fact that robots are involved in the painting line, at the exit the control check is carried out by people, specialists can immediately notice a defect and, if necessary, send such a body for repainting. But as employees assure, this happens very rarely. Robots also help people on the conveyor, for example, there is such an automated assistant at the stage of installing the front panel. It not only helps a person during the installation of such a large-sized part, but also speeds up the process itself and makes it as accurate as possible. The car production process at the plant is structured clearly and logically, which increases speed and accuracy. On the line where people are involved, each person is responsible for a specific phase of the assembly, which avoids mistakes and speeds up the process. Yes, of course, people in production look like robots, monotonously performing the same function, but, probably, without this in such complex production processes as assembling a car, there is still no way to go. Today, the Hyundai Motor plant in St. Petersburg produces such popular car models as Hyundai Solaris and Creta, as well as KIA Rio on the line. The first two cars are the most popular Hyundai models on the Russian market, due to the pandemic and the suspension of production, the company even faced a shortage of these cars, which is observed even now, when the plant has completely restored production and is operating at full capacity 24 hours a day, five days a week. …

And in honor of the tenth anniversary of the Hyundai Motor Manufacturing Rus plant in St. Petersburg, Hyundai presented a special series of the Solaris model – “10 years”. It was the Solaris sedan that became the first car launched into mass production at the Russian company Hyundai Motor. The Solaris 10 Years Anniversary Series, released in a limited edition of 4 vehicles, has received a package of the most popular and useful options. A limited edition sedan is offered to Russian customers on the basis of Active Plus or Comfort trim levels in combination with 500 or 1.4 engines, as well as a six-speed manual or automatic transmission to choose from. An important date in the history of the plant is reminiscent of the “1.6 years” emblem used in the exterior and interior of the car.

In general, it was interesting to visit the Hyundai Motor plant in St. Petersburg and look at the production of cars. It’s nice that Hyundai localizes the production of its models, providing our compatriots with jobs, and automates and robotizes the line, which improves the quality of products. By the way, according to the company’s representatives, this plant in St. Petersburg is the most technologically advanced car manufacturing enterprise in Russia.