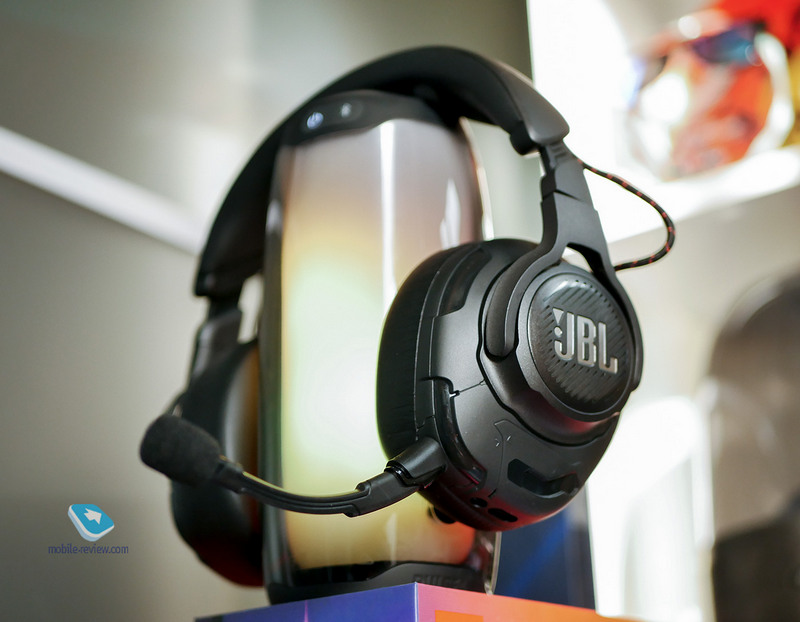 Summer is over. Working days have come not only for adults, students, but also for schoolchildren. And this means that it’s time to take a closer look at gaming devices. Yes, yes, everything is exactly like that: country seaside poplars, but at home you need to work and, of course, play.

For gamblers with a level above the “newbie” brand JBL introduced two sophisticated headsets Quantum One and Quantum 800. The names are loud, juicy and consonant with the third-person shooter Quantum Break, which I put on XBox One X almost a year ago and never played. Is it worth starting? 🙂

JBL Quantum One is a professional wired headset with a huge number of features and technologies: Quantum SPHERE 360, Quantum SOUND Signature, Quantum ENGINE support with the ability to create profiles, active noise cancellation and so on. In addition, the headset is equipped with RGB backlighting: you come home from work, and the whole apartment is in the glow of rays – which means that the wife and daughter are chopped into COD.

The JBL Quantum 800 is already a wireless headset, but still with active noise canceling and Quantum SOUND Signature support. There is RGB lighting here too, albeit a bit simpler than the One.

From an unusual, in my subjective opinion: the microphones are removable, the One comes with a calibration microphone for the PC application, both gadgets are provided with wired gadgets for adjusting the volume and on / off the microphone. However, One also comes with a dedicated desktop chat / game balance control box.

Naturally, such gaming accessories cannot be cheap, so the Quantum One model will cost 17 rubles, and the Quantum 000 – 800 rubles.

It is worth saying that both devices look like devices from a spaceship. Well, or I just haven’t dealt with gaming headsets for a long time.

The model weighs about 370 grams, and the dimensions are slightly larger than the average on-ear headphones, for example, the recently reviewed JBL Club 950nc. By the way, the style is very similar, despite the fact that One is for players, and Club is for music lovers. The entire Quantum One construction is made of durable plastic. And I would not say that it looks expensive and rich. Headband made of eco-leather with an unusual convex shape. From the headband to the cups, black and red data wires are suitable. There are no controls on the right earpiece. All the main rotors and push buttons were transferred to the left cup. Apparently, it is assumed that the PC will be on the left. So, on the cup there are:

There are also two indicators: power and TalkThru mode. One of the main features is the backlight. It is divided into three sectors: logo, ring and corner. In the first case, the area under the JBL logo is illuminated. In the second, there is an uneven contour around the perimeter of the cup. In the third – the corner of the cup from the front side.

In the JBL Quantum Engine application there is a separate item “Backlight”. There you can either turn it off or customize it for yourself, and very subtly: there is a choice of tanning timing and color. For example, it is easy to set so that the ring glows green for the first 2 seconds, then red for 3 seconds and yellow for another 5 seconds. Moreover, for each sector, you can set the type of glow: constant, wave, failure, turns, and so on.

Interestingly, the choice of color is not just RGB, but a large number of shades of color: 255 tones are allocated for each. Only this thing can be played for several hours, adjusting the headset to suit your wishes.

By the way, I found the Quantum Engine application with great difficulty, and then following the link on YouTube in some Indian review of JBL headphones. The program was installed and required to restart the PC. I rejected and proceeded to work. Then Windows asked me again about the “reboot”. And I refused again. For the third time, “Windows” scored at me and, without asking permission, rebooted Windows with all open windows, projects and programs.

A bit of theory that you need to understand the essence of the Quantum One headset.

The QuantumSPHERE 360 has a head tracking sensor for capturing 360 ° sounds around. In ordinary headphones, when you move your head, the sound environment changes. But with the JBL QuantumSPHERE 360, if you turn your head, the perceived location of the sound source stays in place thanks to the head tracking sensor. For example, if sound is coming from the front and you turn your head to the left, the perceived location of the sound source moves towards your right ear.

This feature hit me the most. In toys, you hear what is happening exactly where it happens. This feature also works when watching movies. As a simple example: on the screen, two people are talking to each other, and you hear the sound exactly in the center. As soon as you start tilting your head left or right, the sound instantly changes the direction of the dialogue of people. Moreover, this happens in perfect synchronization. Very unusual, 100% immersive.

To adjust the QuantumSPHERE 360, you need to go into the applications and center, select the diameter of your head and set the height. I tried to play around with the last two parameters, but I never heard the difference in sound.

A couple of words about the microphone in the same JBL Quantum Engine. There is a choice of volume and amplification of your own voice. It seemed to me that the sensitivity is average, I would like to be higher. You will probably notice this from the sound recording below.

About the sound. It is similar to the one that the JBL Club 950nc headphones give. Not a bad bass, the voice is heard perfectly, but the highs sound primitive. Another thing that confused me was the volume. She is not tall. More precisely, like this: it is sufficient for watching movies or toys in a quiet place. Another 20-30 percent is missing. I turned the volume to the maximum on the headset itself, and on the external unit, and on the PC. So, by the way.

And also in Quantum One there is active noise reduction technology. It brutally crushes noises, sometimes you don’t even hear the clacking of the gaming keyboard during hot battles. However, sounds from an open window are heard without difficulty. It was probably intended that way.

One could write even more about the JBL Quantum One, but here the real impressions from the sound and the infinite number of headset settings in the Quantum Engine application are already important.

In terms of technical characteristics, the Quantum 800 headset is almost one-on-one like the Quantum One, but the former does not have head tracking, it connects via Bluetooth / 3.5 mm / USB, the microphone cannot be disconnected, only the logo and ring are highlighted. The Quantum 800 headset looks much simpler: it has a rather familiar design, close to the usual full-size headphones. The headband is smooth and made of eco-leather, the cups are also plastic and painted silver. It doesn’t sit as comfortably on the head as the One headset.

In this model, only the logo itself is illuminated (in One, the entire space around the logo was illuminated), and the ring is much smaller and runs along the perimeter of the logo. The settings for the color and duration of the glow are present in the Quantum Engine settings. The capabilities are similar to the One.

On the right cup:

On the left cup: And you will find ANC microphones on the sides of the cups.

Of course, there is a microphone for chat. Unlike the One, it is built in here. Lower it – it is activated, raise it to the headband – it turns off with a characteristic mechanical sound. The microphone indicator lights up during operation.

The 800’s microphone is more sensitive than the One. Below is an example of a recording.

About the sound. It is definitely better than Quantum One. The low frequencies in the Quantum 800 are outrageous, tears from the eyes are flowing at such low frequencies – it’s very cool! The highs and mids are cleaner, and the One seems to be narrowing the frequency range. The volume is 15-20% higher.

I decided to present everything in the form of a table for a visual comparison of the two devices on a five-point scale. Of course, some things are subjective.

I agree, there is no clear advice – take this headset, and not that one. I would reason like this: if the device is purchased exclusively for a stationary PC / console and to get the maximum number of game chips without regard to the quality of the music – Quantum One (17 rubles). For all other cases – Quantum 000 (800 rubles). That is, in general, I was confused only by the sound of One when watching movies, listening to music. In games, both headsets are extremely good.

Here and here you can learn in detail about technologies, about the difference between models from the Quantum series. By the way, I still have a budget headset Quantum 200 in stock. If you are interested, I’ll also tell you.

As usual, questions for the audience: does anyone use gaming headsets, and if so, which ones do you prefer and why?