The Surface Go model first appeared in 2018 and for Microsoft it was an attempt to play against the Apple iPad, the company needed an inexpensive tablet, which will act as their proposal in a falling market. The coated version of the Surface was built on the most inexpensive components, leaving only the magnesium alloy body from the older models. This approach did not make this model interesting for the mainstream buyer, as the performance left much to be desired, as did the battery life. For most tasks, the iPad was much better suited. 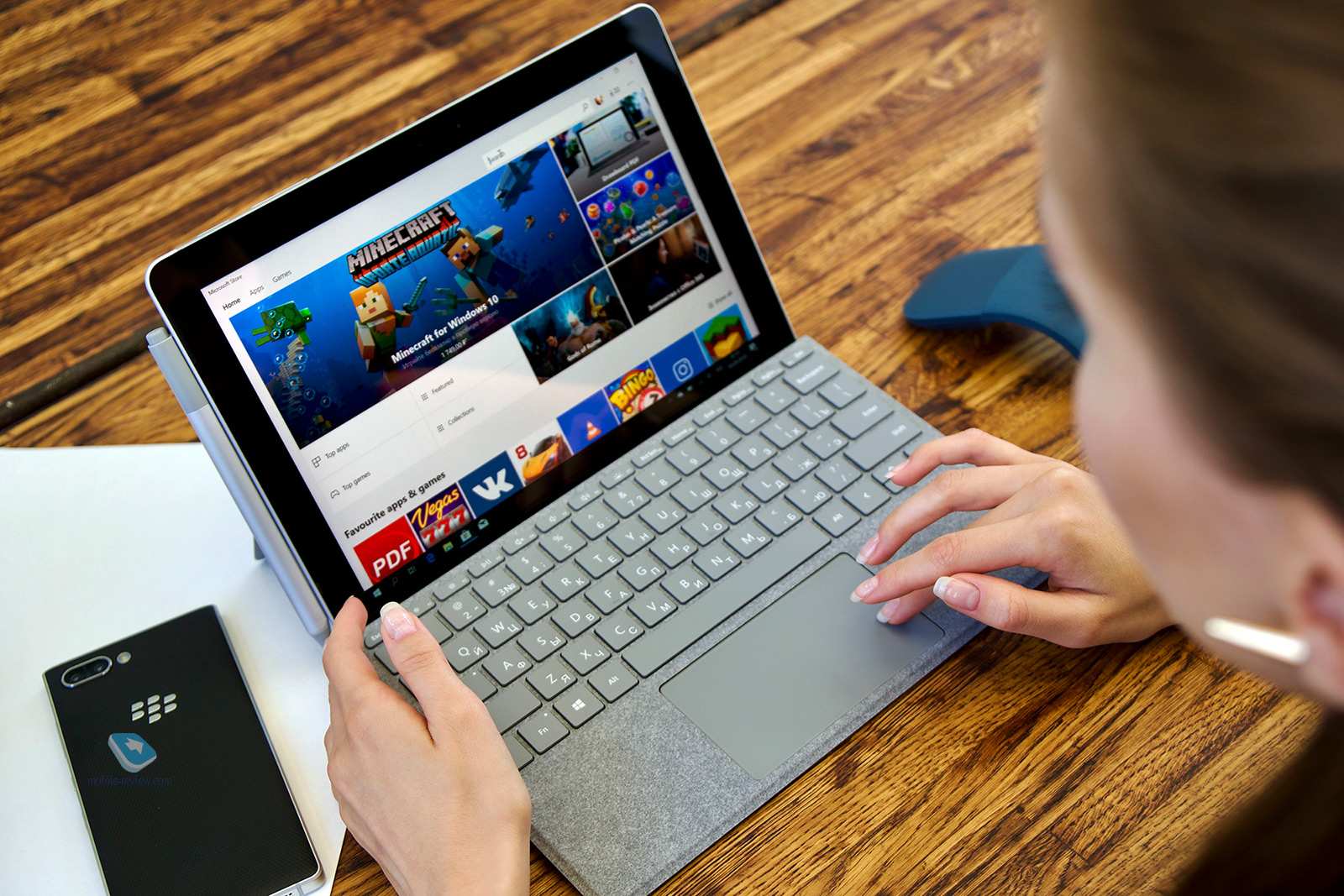 The Surface Go model was sold more or less in noticeable quantities in the United States, in other markets demand was minimal. In Russia, the entire Surface line is not represented, and you cannot officially buy these devices. Windows fans buy such devices (it is this system that is needed for minimal money), but these were mainly corporate purchases, where the cost of the solution also came to the fore.

In a way, the Surface Go 2 is a bug fix, but it looks odd. The basic versions were priced like an iPad, but with the same dead processor and low battery life. Most reviews consider this version, although it is correct to look at the tablet that goes to Intel m3, this processor provides at least minimal comfortable work.

The big plus of this model is that it is made of magnesium alloy, just like all the other devices in the Surface line, there are no changes here. One color is platinum, but it is not bright. The hinged leg conceals the microSD card slot, which is an inexpensive way to expand your tablet’s memory. The leg on which the tablet stands is widely adjustable, look at the photos to see how it looks. You can put the tablet almost on its back or lift it to watch movies or work in the same MS Office. The fact that the case is made of magnesium alloy gives the device a certain chic. There is a plastic insert on the back surface, there is also the main 8-megapixel camera, but the front camera is 5-megapixel. Nothing has changed since the original Go.

At the bottom there is a magnetic connector for connecting accessories, for example, a cover with a keyboard. On the top there is an on / off button and a volume control button. On the right side there is a 3.5 mm jack, as well as a Surface Connector, through which you can recharge your tablet. There is also a USB Type C connector, it is the only one in the tablet for connecting something. The scarcity of connectors is not such a big drawback, after all, this is a two-in-one tablet, you don’t need a large number of accessories, and the same mouse can be connected via Bluetooth. You can use the USB Type C connector to charge the tablet, but it will be very slow and will take about 8-9 hours. And on condition that you will not work in Go, but leave it alone. So this charging option is only for emergencies, when you forgot your own charger at home or in the office. The tablet is excellent in the hands, the weight without a cover of half a kilogram is also pleasing and comparable to tablets, but there is a greeting from the past, this is a rather strange screen. On both sides there are two speakers, they are muffled, despite the power of 2 W, which is declared for them. There is no volume reserve either, but I would like more, much more. Suitable for watching movies in a quiet room, but hardly for anything else. In general, the design of the tablet is exactly the same as in the previous model, you will not notice any differences except the screen. The technical characteristics of the screen are as follows: 10.5 inches, PixelSense, 1920×1280 pixels (220 ppi), IPS, 3: 2, contrast ratio 1500: 1, touchscreen, up to 10 clicks at the same time, automatic brightness control, Corning Gorilla Glass 3. The frames are smaller than in first Go, but they are still present and this is noticeable. The base version of Go has 4GB of RAM, which is very low for Windows 10, and 64GB of eMMC (which is noticeably slower than an SSD). It’s definitely not worth buying the basic version, as it has serious performance flaws, you will simply be unhappy with this decision. Constant freezes of programs, slow work, impressions will be purely negative. Another thing is the option for 8 GB of RAM and 128 GB of SSD, here everything is much faster and you can use the regular version of Windows 10, and not just S.

The base version uses the Intel® Pentium® Gold Processor 4425Y and Intel® HD Graphics 615. The processor is sufficient for day-to-day tasks. You just need to remember that multitasking in this configuration is not the strongest point of the device. You can’t expect the performance of the same iPad or Android tablets from Go, this is a different product category, and, frankly, it is slow.

The version on the Intel m3 is perceived quite differently, quite smart, although not the fastest in the world. If you take this device, then only on this processor. But the loss to conventional tablets will still be noticeable. Everything is familiar here – dual-band WiFi, bluetooth 5. You can also buy the LTE version to get mobile internet.

Battery Li-Pol 27.8 W-hours, operating time – up to 6 hours in mixed mode, up to 9.5 hours of maximum video playback. The operating time is another disadvantage of the device, since it runs on an “adult” version of Windows, not on an ARM processor, and all this is gluttonous in relation to the battery. If a regular tablet lasts about 8-10 hours, then here on average 5-6 hours (and this is not in game mode, since there is no point in playing here, the performance is too low, this is a working machine).

It will probably be enough for one working day, but if you expect to be active on the road, then this is unlikely to be the perfect device.

Charging time with a proprietary unit is about 3 hours. Separately, you can buy the Microsoft Pen stylus ($ 70), as well as the keyboard cover ($ 100, previous keyboards are suitable). In my opinion, only a few units will need a stylus, but a keyboard cover will come in handy, as this is one of the best keyboards for portable devices. I had a localized keyboard, Russian symbols were laser-engraved on it. The size of the keys, the force of pressing, their positioning are all huge advantages, even though the device is 10 inches and the keyboard is small, it is a pleasure to type on it. Probably the best portable keyboard out there. And also add a normal touchpad and get a great accessory. As weak as Go is, so is the keyboard. It is in keyboards that Microsoft does a lot better than any other company.

The basic version of 4/64 GB starts at US $ 399, which on the one hand is the minimum price for Surface, on the other hand, the device is a little more than completely useless. For this money, it makes sense to buy an Android tablet or iPad. As a two-in-one device, it is also far from ideal, it is worth looking at regular laptops or other models. The high cost kills all the advantages, and the second generation is not much different from the first – it’s good that a version on the processor appeared, which is faster. But this does not save this whole story, it remains aimed not at the end customer, but at corporate purchases, where the availability of the device is important, and what users will think can be disregarded. It is strange that Microsoft is actually marking time in the budget line and does not really change anything. I would understand if the previous device was perfect and did not require improvements, but no. Therefore, I think Surface Go 2 is a very strange device in all aspects.

We thank surface-pro.ru for the provided device.