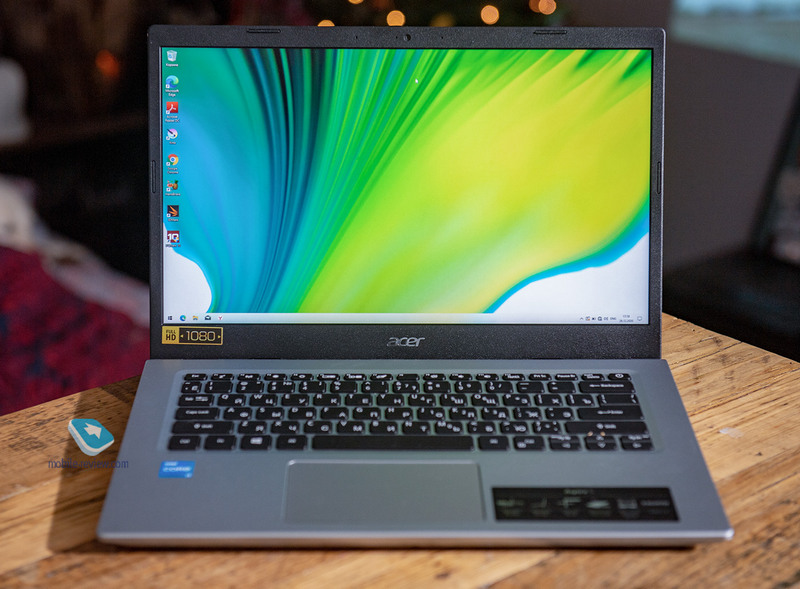 The Acer Aspire line includes office notebook models aimed directly at work. In December, it was updated with an eye on the 11th generation Intel processors, as well as, importantly, the new Iris XE graphics. Unfortunately, the last point is not applicable to the test model, but we managed to work on the new chip. At the moment, Iris XE graphics, an Intel Core i5-1135G7 processor and 512 GB SSD with 8 GB of RAM are installed in the top. The reviewed fourteen-inch model Acer Aspire 5 is somewhere in the middle of the lineup and runs on the i3 chip. The test came with a laptop with a soft pink lid. It is not so striking, the surface is matte, albeit with a slight tendency to get dirty. In addition to pink, more strict and classic colors are available. The cover is made of aluminum and was pleasantly surprised by its strength, the material practically does not lend itself to twisting force and only slightly squeezes in the area of ​​the manufacturer’s logo in the center of the panel. The weight balance of the lid and the main body is good; one finger opens the laptop without problems. The new Acer Aspire 5 weighs about one and a half kilograms, dimensions and slender profile are quite typical for a diagonal of 14 inches. The assembly is tight, reliable. Inside, we will have a case made of matte silver plastic with traditional stickers from manufacturers. The material is non-marking and durable; during testing, not a single scratch appeared, even taking into account the constant wearing of fitness trackers on both hands. Otherwise, we will not find anything remarkable here, so we look at the connectors. They are concentrated on the left side of the laptop. The power connector is moved closer to the screen, while the ports for connecting peripherals are closer to the user. This arrangement makes it possible to connect cables at least to all ports at the same time, there will be no interference. On the right side is the headphone jack, USB 2.0 and Kensington Lock. From the standpoint of ergonomics, everything is fine in the laptop, it is convenient to use it in almost any scenario. Unless the screen of the novelty does not unfold 180 degrees, but this has its own functional explanation. If we look at the hinge of the screen, then upon opening we will see how its semicircular groove moves downward, acting as a kind of stand and raising the Acer Aspire 5 case above the surface on which it stands. This improves heat transfer and makes text input easier. The laptop has an IPS-matrix with a diagonal of 14 inches, FHD resolution, 1920 x 1080 pixels. It is good that the resolution is not lower, otherwise it would be completely out of date. The manufacturer calls the bezels around the screen thin. In my opinion, the thickness of the side frames is quite average, the top panel is noticeably thicker, and the webcam is located here. There is no color gamut specification announced for the display. The color temperature goes more into cold shades, a subjective moment, it can be adjusted. For example, in the Acer Quick Access utility, you can enable the Bluelight Shield option, which cuts off the blue glow and makes the overall color gamut softer and warmer with a yellow tint. In the same utility there is an automatic image optimization mode, it works only when the laptop is connected to the network.

The fill of the display is high-quality, not a single light on a black background is visible in the dark. But the brightness could have been more, at a full level in natural daylight conditions it is quite comfortable to use it, but if the light is brighter, then you will have to look for options for comfortable work. The matte coating of the display somewhat smoothes this point.

The speaker system produces a surprisingly pleasant sound that comes out of the cabinet through the slots in the display hinge area. The sound is not blocked either by hands or by the surface on which the laptop stands; the case acts as a kind of resonator. The volume is sure, it will definitely be enough for office conditions. For louder environments, a headphone jack is available.

Subjectively – not the strongest point of the laptop. First of all, there is no keyboard backlight in the test modification. Of course, if the user types without looking at the keyboard, then there will be no special problems even in the dark, but I consider this element important in a laptop for 50 rubles. The keyboard is island, slightly recessed into the body. There is no digital block, if desired, separate letter keys duplicate it, you should press Num Lock. The sizes of the letter keys are as close as possible to the full-fledged keyboards, the “arrows” and the row of F keys have decreased in size. You can get used to the keyboard pretty quickly, it’s a good option for the office, a matter of taste. The travel of the switches themselves is small and quiet, the profile is low – in general, an ordinary membrane keyboard. I would prefer a deeper move, although I do not exclude that these are the consequences of using “mechanics” on an ongoing basis. The power key is treacherously located instead of the usual Delete key, so you have to be careful. The touch panel is offset slightly to the left of the center and has a moderately smooth finish. The control works well without any surprises, including multi-finger gestures.

Frankly, it was the processor that was the main reason to take the laptop for the test. It was interesting to see how the 11th generation of Intel chips, about which the specialized media wrote so actively, will show itself.

Not to say that a dual-core solution in the i3 format is what I expected, but in fact, my stereotypes were slightly shaken. In the format of a typewriter and working with a browser, in fact, such a processor may well be enough, there are no performance problems. For greater confidence, you can put the system into performance mode. Tiger Lake even on the example of the most basic model in conjunction with 8 GB of RAM shows quite decent performance, which is confirmed by benchmarks that do not differ so much, for example, from the eight-core solution from AMD in the Acer Swift 3.

It’s a pity that we didn’t manage to test the new graphics, there are such versions among the new models of Acer Aspire 5. Well, let’s leave it for 2021. With a discrete graphics card, you don’t have to rely on stable operation of “heavy” applications, which is confirmed by the results of the Cinebench test. So for more confident performance, you should pay attention to the versions with i5 and new graphics. Well, I would also like to see versions on i7. On the other hand, you can stick in more RAM, even if this does not become a panacea. Autonomy with all the tricks can be extended up to 9 hours, with my usual settings it was possible to get up to 7 hours of battery life, a good indicator. The included power supply fully charges the laptop in two hours. Unfortunately, charging is not available via Type-C, the connector is used exclusively for connecting devices. I was pleased with the quiet operation of the Acer Aspire 5. The coolers became audible only during the benchmarks, while they work almost always, but most of the time they are absolutely silent. The heating of the case was distributed, among other things, to the keyboard in the area of ​​the WASD keys, while you can work without any unpleasant sensations.

If you focus solely on the cost of the test version in the region of 51 rubles, it becomes obvious that it has plenty of competitors. Here and ZenBook 000 on AMD Ryzen 14, and a good Huawei MateBook D5, as well as a number of Acer Swift 14 models on Intel 3th generation. If you believe the current prices, then the version of the hero of the review with a 10 GB SSD is ten thousand cheaper, which gives a certain advantage over competitors due to the newer processor. Acer Aspire 5 in the new edition in the basic version is not yet perceived as a competitive solution. I would pay attention to the version with a backlit keyboard and the repeatedly mentioned next generation graphics. On the other hand, the 256 GB version looks quite nice, in all respects it is a high-quality working typewriter. At the same time, there are a lot of competitors on the market, whose processors have a larger number of cores with an older architecture. Still, it’s time to take a closer look at the new generation of processors, we are waiting for a response from AMD.