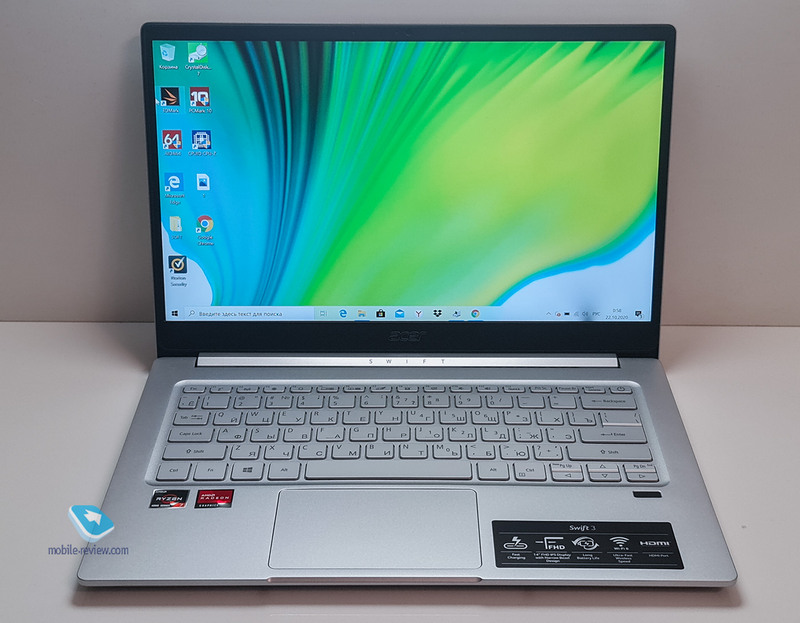 Acer Swift series includes lightweight and compact solutions for office work, such laptops are easy to take with you and work on the road, autonomy and performance will definitely be enough. The number and abbreviation after the name (Swift 1/3/5/7/7 Pro) is intended to somehow differentiate the models, in fact it may seem that there is no logical distribution, except that in the case of the hero of the review, there is an indication of the processor manufacturer. The clarity of the picture is clearly not facilitated by the spread in processors and video cards, but in general, an increase in performance is visible between the lines, from the youngest to the senior. Acer Swift 3 Ultrabooks have received an update in the form of AMD 4000 series processors. The flagship modification received 16 GB of memory, 1 TB SSD and a similar chip as in the test model, which occupies not the first, but not the last place in the lineup. The cost of the top modification is 85 rubles, the test one – 000 rubles.

The compact body of the laptop is made of an alloy of magnesium and aluminum. In my memory, this is one of the most durable and strong ultrabooks, for which no military certification is declared, and so on. This is true for both the lid and the main panel, they are only slightly squeezed in the center, which is not at all critical. The surface of the material is matte, its texture hides imprints on the case, plus a little hides a light silver tint. The balance of the lid and the main panel is average in weight, you have to hold the main panel with your hand when opening. I would describe the design of Acer Swift 3 as calm and minimalistic: there is only a neat manufacturer’s logo on the lid, inside, of course, there are some stickers, even if they do not interfere with work. The edges of the laptop are slightly beveled to give an even more slim body. In the thickest part of the case, it is 1.79 cm, it seems not so much, but it could be thinner. This does not prevent you from easily carrying the laptop and taking it with you on the road, even in a case it will not create problems, the weight is small. In terms of ports, everything seems to be at the level of other models. The same question arises, why not add another USB Type-C with charging option, it would be very nice. So far, it is proposed to be content with the complete power supply unit, even if it is very small and light. We’ll come back to this point. But there is a fingerprint sensor located under the lower right corner of the keyboard unit. The setup is quick, there are no questions about the scanner, but in terms of form, I would prefer a more square panel. But even in this form, there are no problems in his work. This is where the possibilities of biometric authentication end, the webcam does not have Windows Hello support. The Acer Swift 3’s screen isn’t the brightest Full HD IPS panel. The bezels on the sides are about 6 mm thick, the top one is expected to be slightly thicker, the webcam is in place. The screen has a matte surface, it also uses ComfyView technology, which minimizes glare and reflections and reduces eye strain. As such, the color coverage is not stated, according to my feelings and preferences, the matrix suited me. The moment with the matrix is ​​subjective, there are definitely those who want it brighter, during testing this parameter was not set higher than 70%. Even under the bright light of home lamps, working with text is convenient, if, of course, 14 inches fit into your script. In general, I rate the display as a solid four, I did not notice critical highlights on the black fill, as well as other artifacts. The display folds out 180 degrees, a nice bonus. The two speakers are on the bottom of the laptop, not on a bevel, but on a flat surface. This slightly affects the volume of the sound, but mostly the sound resonates inside the cabinet, so even if the laptop is on its knees, the clarity of the compositions or speech is not lost. The volume margin is slightly above average, it is able to block the fans under load, but nothing more. I would add volume, taste still sometimes comes to the fore.

The keypad is traditionally slightly recessed into the case to protect the display from touching the keys when closed. The keystroke is very quiet, blind input does not reveal any problems with entering letters, even if the switches are slightly smaller than usual for such a diagonal. For people with thumbs, it will not be so convenient to use the arrows and the Pg Up and Pd Down keys, they are located close to each other, there may be false presses. Small in size and a row of keys F, Esc and the power key, but they are at least slightly spaced horizontally. I typed a fair amount of text on the keyboard, there were no complaints about ergonomics, except for the moment with the size. A curious moment with the backlight: it is on all keys, except for the spacebar. Representatives of the manufacturer assured that it was so conceived, but it looks a little strange. The touch panel is quite standard, without any tactile separation for buttons imitating mouse buttons, as well as inscriptions and drawings. There is no glass coating, although this does not affect the operation of the element in any way. Working with clicks and gestures is fast and clear, it takes medium effort to squeeze the panel until it clicks. The processor installed in the Acer Swift 3 is already familiar from the Lenovo Yoga Slim 7 testing.

“… The AMD Ryzen 7 4700U processor from the Renoir family is built on the Zen2 microarchitecture. The advantage of the 7 nm process technology is the increased core frequency, which makes it possible to catch up with Intel solutions (for example, i7-1065G7 and Core i7-10710U) in synthetic tests and in practice, and even outperform them somewhere. The letter U refers to the processor as a 15W “thermal package” solution. If we evaluate it within this indicator, then the processor is inferior to its “colleague” Ryzen 8 4800U in frequency, and the lack of multithreading (SMT, 8 cores, 8 threads) also affects. In simple terms, in a workload format without the use of highly memory-intensive applications, you can count on excellent performance. In terms of the number of cores, the maximum for ultrabooks has been reached here.

While we’re on the subject of video memory, the integrated video adapter does not seem to boast of its characteristics at first glance. It’s still the same Vega architecture, although many expected to see Navi. The number of processing units remained unchanged, but the same new technical process provided a 25% increase in frequency, the performance of the video card increased by 60%, and the bandwidth increased by 77%, and all this while reducing the physical size of the GPU. It is clear that the amount of video memory will not allow thinking about the latest games and complex releases of the past years. You can safely launch your favorite casual game, you can’t hope for more. On the other hand, not everyone decides on full-fledged gaming at 14 inches … “. Interestingly, the hero of the review performed significantly better in the test for converting 4K video to Full HD. The ultrabook coped with it in 2 minutes, the maximum processor temperature was fixed at 93 degrees. At the same time, this did not affect the case in any way, the fans reacted and did not allow overheating. Still, there is a feeling that the processor lacks a worthy partner in the form of a discrete video card, but this story is probably not about ultrabooks. In terms of autonomy, the situation is as follows: with all the measures taken to preserve the charge, the laptop can work up to 13 hours. In my case, the indicator was 9 and a half hours, but the brightness was about 30 percent and the background streaming music was playing. Fast charging allows you to fully recharge the charge in 1 hour 50 minutes, 30 minutes of charging is enough for 4 hours of use.

If you look at the alternatives, there are many options, but not all of them are comparable in characteristics. First of all, these are very similar on paper Huawei MateBook D15 and Lenovo IdeaPad S340, except that the processor here is of the last generation. But the cost of such solutions is, respectively, 55 and 000 rubles against 60 for the test Acer Swift 000. The new processor has already released VIvoBook from Asus, the cost of a similar configuration will be slightly lower, the version with a 75 GB SSD costs 000 rubles. You can also consider versions with a larger diagonal, for example, Honor MagicBook Pro 3, in which, albeit Ryzen 256, but full stuffing and a cost of 62 rubles. It seems to me that the laptop, despite all its positive aspects, is a little overrated. Probably, this is the influence of the new processor, maybe the price will go down. I would call such a cost the main limiting factor, otherwise I liked the laptop: a durable, lightweight and non-marking case, good autonomy, a fingerprint – you can live and work.