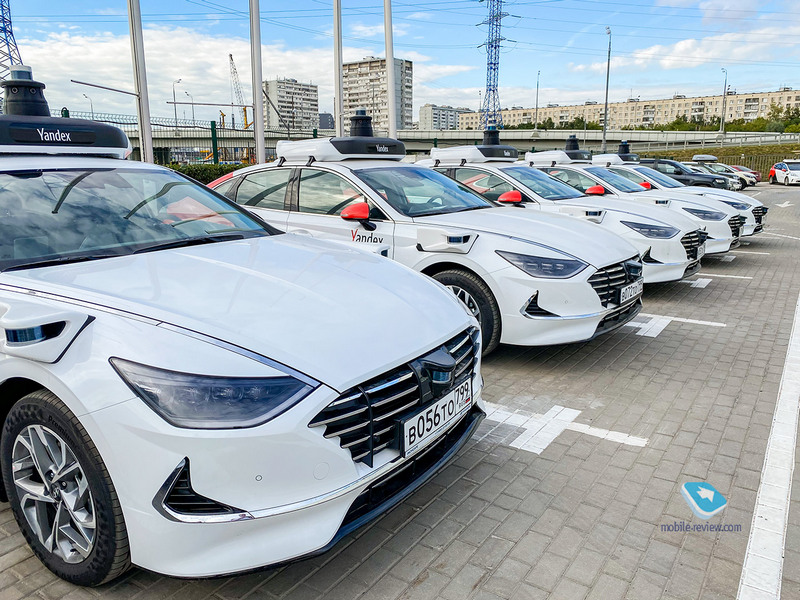 During the week I managed to ride an unmanned vehicle developed by Yandex. The test was a fourth-generation drone built on the basis of the Hyundai Sonata, on which employees of the Russian company worked together with engineers from Hyundai Mobis, a subsidiary of Hyundai Motor Group, who finalized the vehicle’s electronic components to better interact with Yandex’s self-driving technology. Today, the company’s UAV fleet contains not only the fourth generation cars, but also the third ones, which are built on the basis of the Toyota Prius, and also rarely, but you can still find second generation cars. The company launched a drone testing program in 2017. The drone based on Hyundai Sonata is equipped with an increased number of sensors and sensors, which allows the car to better orient itself on the road. The computer that processes the data is located in the trunk, in the place of the spare wheel, and a separate cooling system is equipped nearby. On the roof of the fourth generation unmanned vehicle is the main navigation unit with all-round cameras, sensors and lidar. The main scanner unit in the current generation is equipped with its own self-cleaning system that allows you to calculate the contaminated sensor and clean it. Complements the main sensor unit, cameras with different focal lengths on the windshield, two lidars and cameras on the front fenders, as well as a lidar and a camera on the grille. The latter are installed at an angle and allow the car to read data from the roadway to avoid collision with obstacles. The wing lidars allow the system to see other road users in restricted areas, such as when exiting a parking lot. Thanks to the complex use of various sensors and cameras, the car’s system is better oriented in space, it sees about 200-250 meters around itself and is able to recognize the size of objects, their speed, and also predict the points of intersection with them. The drone also recognizes people and animals, it is interesting that they did not install a thermal imager for this, but they say even without it the machine sees living objects and is able to see even small animals. The test car has tablets on which a graphic image is projected, which in a simple version recreates the picture that the computer sees.

For obvious reasons, the Yandex drone strictly observes the traffic rules and will not move 75 km / h at the permitted 60 km / h, like ordinary drivers. And also he will not try with all his might to go around the obstacle in his lane, if this is not necessary, he will wait until the vehicle in front completes the maneuver and continues to move. But at the same time, in difficult areas, for example, where there are no markings / signs, a traffic jam or something else, the autopilot will analyze the movement of other road users and move in the same way. For navigation, the system uses information not only received from sensors in real time, but also uses accurate maps pre-loaded into the system, so that while driving, the unmanned vehicle analyzes the data and is able to rebuild into the lane necessary for subsequent maneuvering, accelerate or, on the contrary, slow down as needed. The drone system, like in ordinary cars, reads road signs using cameras, they are also used to read traffic signals. The test trip was short, but very intense, we were able to see how the car maneuvers in the stream, turns, lets vehicles and pedestrians pass. I can say that if there is an operator in the driver’s seat, the impressions are not so bright, but without him it is still impossible to move around the streets of Moscow. In general, the car drives confidently in the city and even within the limits of the rules, it drives much better than some ordinary drivers. It should be borne in mind that the drone, having a wider view and not being distracted from the road, which is typical for people, is not only able to see the current traffic situation in a wider spectrum, but is also able to calculate event scenarios in real time, and this is even safer for all participants road traffic. As I understand it, the only difficulty for unmanned vehicles now is to predict the behavior of pedestrians, yet it is impossible to predict the maneuvers of some people.

Today, in Moscow, Yandex drones can only move with an operator in the driver’s seat, in Innopolis, the Republic of Tatarstan, they gave permission for test work of drones in a taxi, and although the operator must be in the car, but not necessarily in the driver’s seat. Yandex’s unmanned vehicle test zones are also located in the United States, where in the city of Ann Arbor unmanned vehicles are allowed to move without a person inside, so the company uses this opportunity to collect data. There is another test zone in Israel, where the company’s cars are tested in a hot, humid climate with its own specific road traffic.

Is it possible today to bring Yandex drones onto roads for independent movement? In my opinion, it is possible, not in large quantities, but at least in the form of a test version in a taxi within the same Garden Ring. Are drones safe today? It’s hard to say, but the car acts only according to the rules and constantly analyzes the situation around, while some drivers frankly do not comply with traffic rules and may be distracted from the road. What are drones afraid of? The worst thing for them is to lose their eyesight, for this reason, Yandex engineers have implemented a self-cleaning system for the upper block of sensors. What are drones for? So far, in the future, this is more of a commercial sector and a service sector, for example, in Innopolis, in addition to a taxi, a courier robot, the younger brother of unmanned vehicles, is already working.