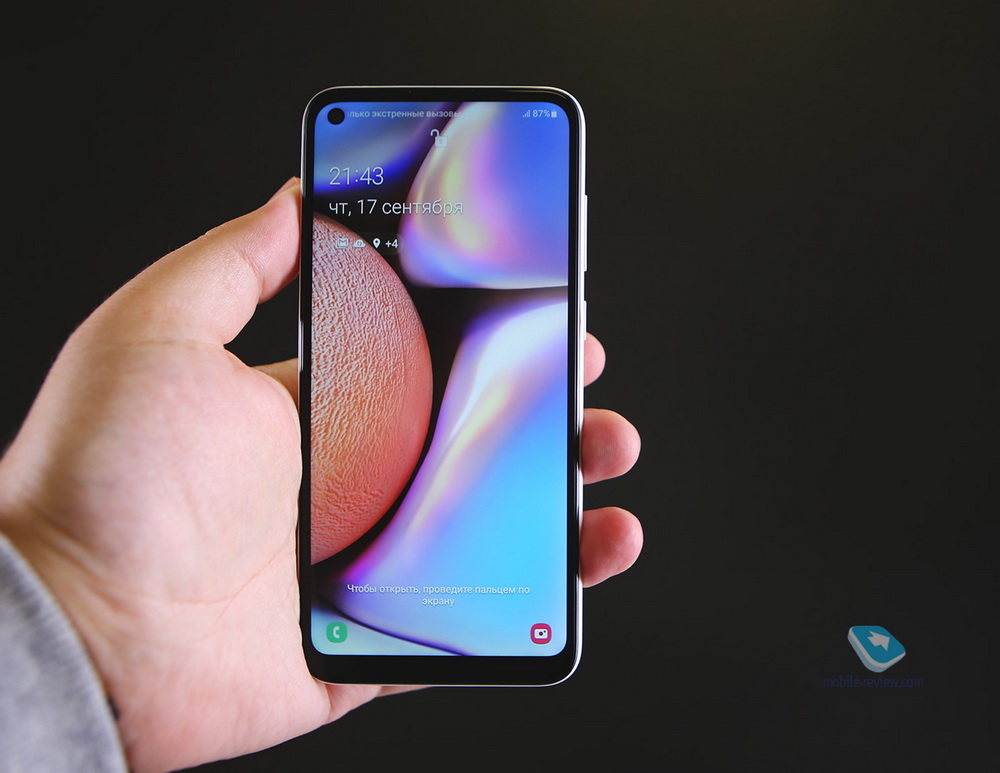 The Galaxy A11 model is in demand among those who meticulously choose a smartphone in a store, trust the Samsung brand, but at the same time do not do their homework, do not research the offer in the segment. The logic of buyers is simple – there is a model A01, which costs much less. In the eyes of buyers, the older device is better in every sense, and therefore it is worth focusing on it. Sales prove it, in Russia A11 is one of the five best-selling smartphones.

But at the same time, the model is not the most optimal in terms of its filling, only 2 GB of RAM, but excellent software and the presence of NFC, it is impossible to call the device balanced. This device is for those who choose a brand, but do not study in advance what exactly they want to buy and receive. Most of the buyers choose the smartphone thanks to the sellers in the stores. Let’s take a look at what these buyers get. The model is available in four colors – black, white, red and blue. The last color is not officially presented in Russia. The body is made of glossy plastic, which is quite good. Hand marks remain, but the case is protected from scratches and is quite reliable. The choice of colors is common for budget models, there are no surprises here. The layout of controls is typical for any Samsung smartphone, it is also worth noting that there are two microphones at the ends (the Chinese usually get by with one in this segment). On the top there is a 3.5 mm jack, on the bottom – a speaker and a USB Type C connector. On the right side there is an on / off key (you can customize your functions on the button), as well as a volume rocker.

On the left side there is a slot for SIM-cards and memory cards. It is not combined, which is not bad. The build quality is excellent, there are no complaints about it. The fingerprint sensor is on the back and can be easily found. Externally, this is a complete copy of the Galaxy M11. The front camera is embedded in the screen, the display itself has noticeable frames, although due to lamination and in the off state, this is not visible. Of course, the bezels here are not as huge as on the iPhone 11, but they are still noticeable, especially when compared to other smartphones from Samsung. Unfortunately, choosing a TFT screen makes it impossible to implement AlwaysOn Display, this function is not here. The screen itself is bright enough, pleasant color reproduction, but it is far from the standard AMOLED screens in terms of color gamut and brightness, which are used even in entry-level models from Samsung.

The screen settings are typical, you can change the color settings.

The screen remains readable in the sun, the brightness is enough to read the message. It is impossible to talk about comfortable work in the sun for a long time, the screen is inferior to those in the models of the middle segment. But it is understandable, this is a budget device. The smartphone has a built-in 4000 mAh Li-Ion battery, it supports fast charging, and such a 15W charger is included.

On average, you can get two days of use with an average load (3.5-4 hours of screen time). With a fairly noticeable load, this will be one day (5 hours of screen operation). For the target audience, this is enough for the eyes. In some use cases, the device will drain faster, for example, when transferring large files over the LTE network. But I emphasize that this is an unlikely scenario for those who buy such models.

The full charging time of the battery is about 130 minutes. Up to 50% charging takes about 60 minutes.

The Samsung A11 used a Qualcomm Snapdragon 450 chipset (14 nm technology), eight Cortex A53 cores with a frequency of up to 1.8 GHz, Adreno 506. A budget chipset that lacks stars from the sky. The interface is fast enough and responsive, which is good for this class of devices. Look at the synthetic test results.

The basic version with memory 2/32 GB, memory cards up to 512 GB, this is enough for most users of such a device. Built-in eMMC 5.1 memory, which limits the operating speed, is a bottleneck for this unit, keep that in mind.

The Galaxy A11 has single-band Wi-Fi, version Bluetooth 4.2, but NFC (Google Pay) is present, which is already good.

From the point of view of navigation, everything is typical (GPS / A-GPS / GLONASS / Beidou), a cold start on city streets takes 2-3 seconds, navigation accuracy is good, but the antenna is clearly inferior to older models, in urban conditions it is almost imperceptible.

The camera interface is familiar from other Samsung models, but there are no additional visual effects, only the most necessary (one more greetings from the ODM manufacturer). Let’s take a look at some examples of photos and videos, this is a very basic camera with basic capabilities. However, you don’t expect anything else from the model of this class.

The model is originally based on Android 10 and OneUI 2.0, that is, this is the latest version of the interface, which in the literal sense can be called one of the best in terms of flexibility of settings and capabilities, and in other points.

A few words about the multimedia capabilities of the device. It has a built-in radio with the ability to record programs. The headphones act as an antenna.

Standard applications are represented by a calculator, file manager, voice recorder and other applications that are necessary for comfortable work out of the box. There are minor differences from native Samsung models, for example, you can assign gestures to the fingerprint sensor. But in general, this is exactly the same software.

The connection quality does not raise any questions, the call is loud enough and, if I may say so, bright and shrill. The vibration alert is average.

The cost of the Galaxy A11 is 9 rubles, this is not the most basic version of the model in the A-series, but it is popular, it is one of the five best-selling smartphones in Russia.

Last year’s Galaxy A10 looks weaker with a 3400mAh battery. At the same time, the price does not differ so much, by 1.5-2 thousand rubles. There are a huge number of models on the market that act in this segment, Honor 10 Lite immediately comes to mind, its price is 10 rubles (but in the company store they immediately give a discount of 990 rubles), however, there is an old version of Android, but who is it will stop for an apparatus of this level? The microUSB connector will probably not be such a big limitation either. Another model is the Honor 9A, which has simpler specifications, but it is quite capable of competing with the Galaxy M11. If you like the Xiaomi brand, then the Redmi 8 (3/32 GB) is worth a look. The characteristics are close to the device in question, but the old version of Android, which is not critical. The price is 9-10 thousand rubles.

As you can see, there is plenty to choose from, and the models of the previous year are often more profitable in cost, although the characteristics are plus or minus comparable. You still will not get a fundamentally different camera quality, battery life. What comes to the fore is how important the trouble-free operation of the software and its quality are. Many buyers in this segment do not care, just as it does not matter what kind of Android they have, how often they receive updates and whether they receive them in principle.

The model, on the one hand, is as simple as possible and not the most efficient in terms of price / quality ratio. On the other hand, this is a device that sells well, which proves a simple thing – people choose a familiar brand that they trust. There are many alternatives and there is something to choose from, including more interesting devices. In my opinion, 2GB of RAM is very little for a smartphone in 2020, and this is the biggest limitation of this model.