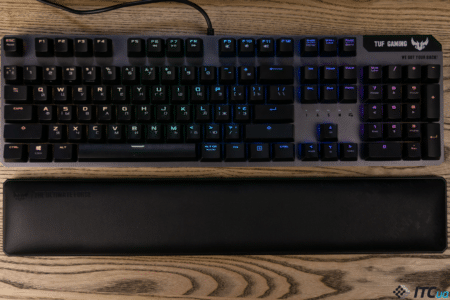 The ASUS TUF Gaming K7 mechanical keyboard has a number of rare advantages, such as its IP56 waterproof rating, convenient switches for both typing and gaming, and won’t take up much space in your workspace. At the same time, it is well assembled and equipped with everything you need.

Nothing but a keyboard, just a detachable wrist rest. It is pasted over with a pleasant material, and inside is a filler with a memory effect. Magnetic stand. 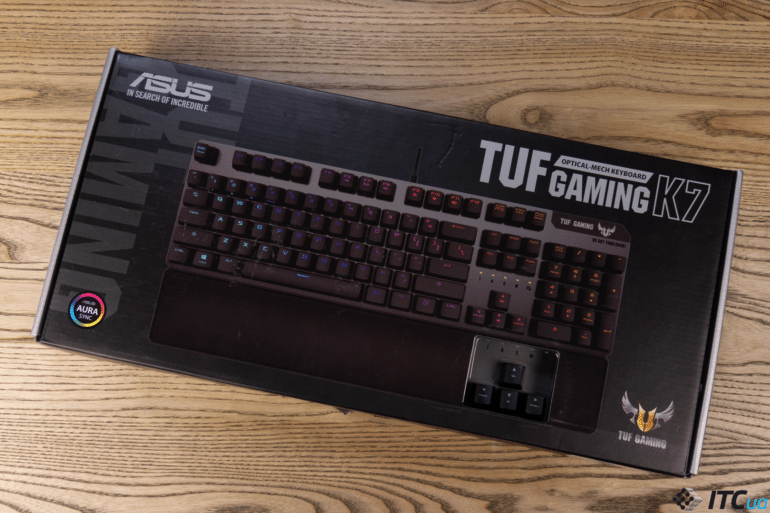 ASUS TUF Gaming K7 pleases with its compact dimensions, although it is a keyboard with a number pad. It takes up minimal space on the table. The keyboard is standard in layout, all elements (text block, function keys, NumPad) are separated from each other and there are no problems with touch typing. 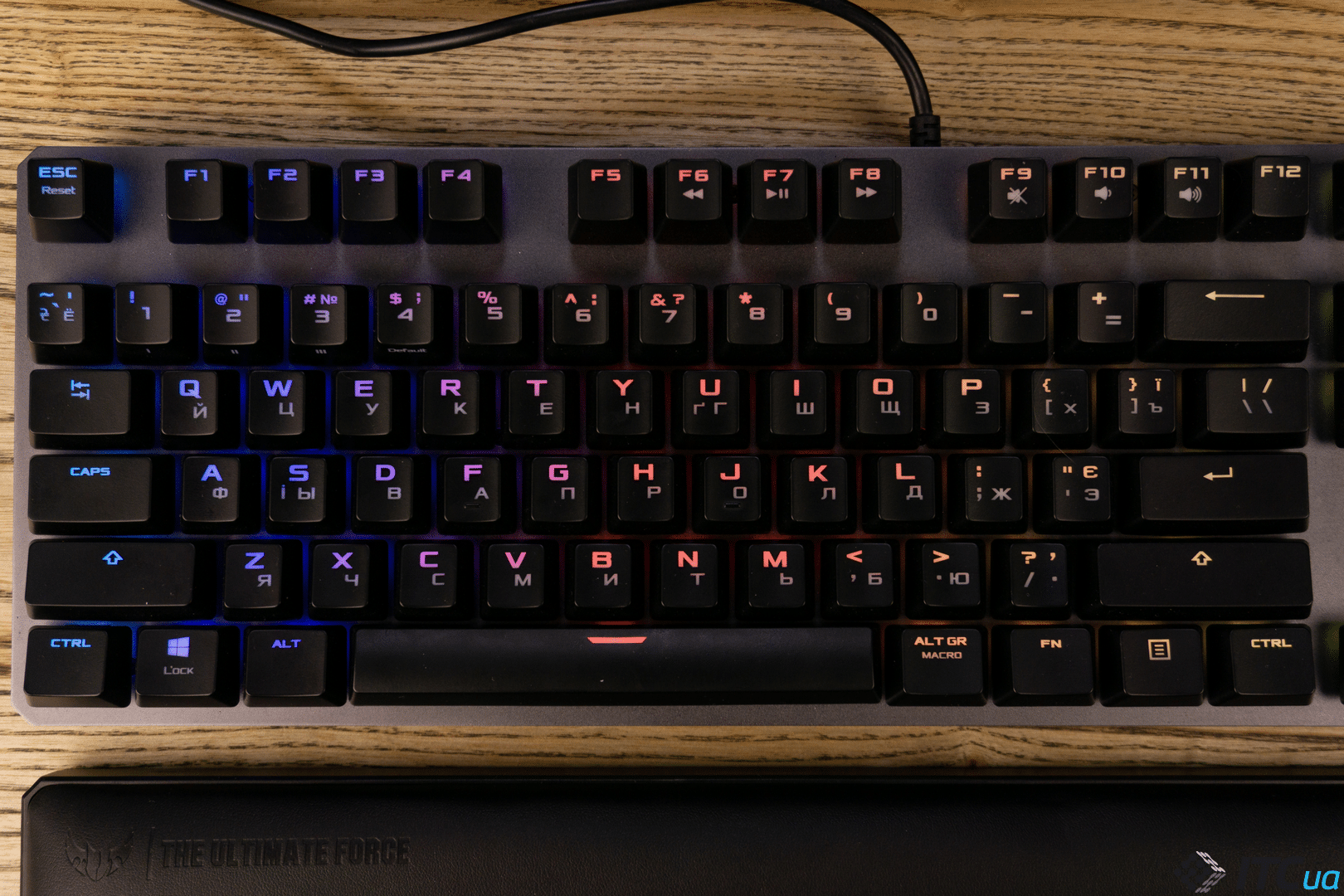 The design is rigid, an aluminum sheet is used as the top panel, which looks stylish and pleasantly cools hands when touched. The bottom is plastic, but the plastic itself is strong, high-quality and not squeaky. But, one of the main advantages of the keyboard is not in this, but in the fact that the case is protected according to the IP56 standard. This means that the filling is protected from dust and water splashes. 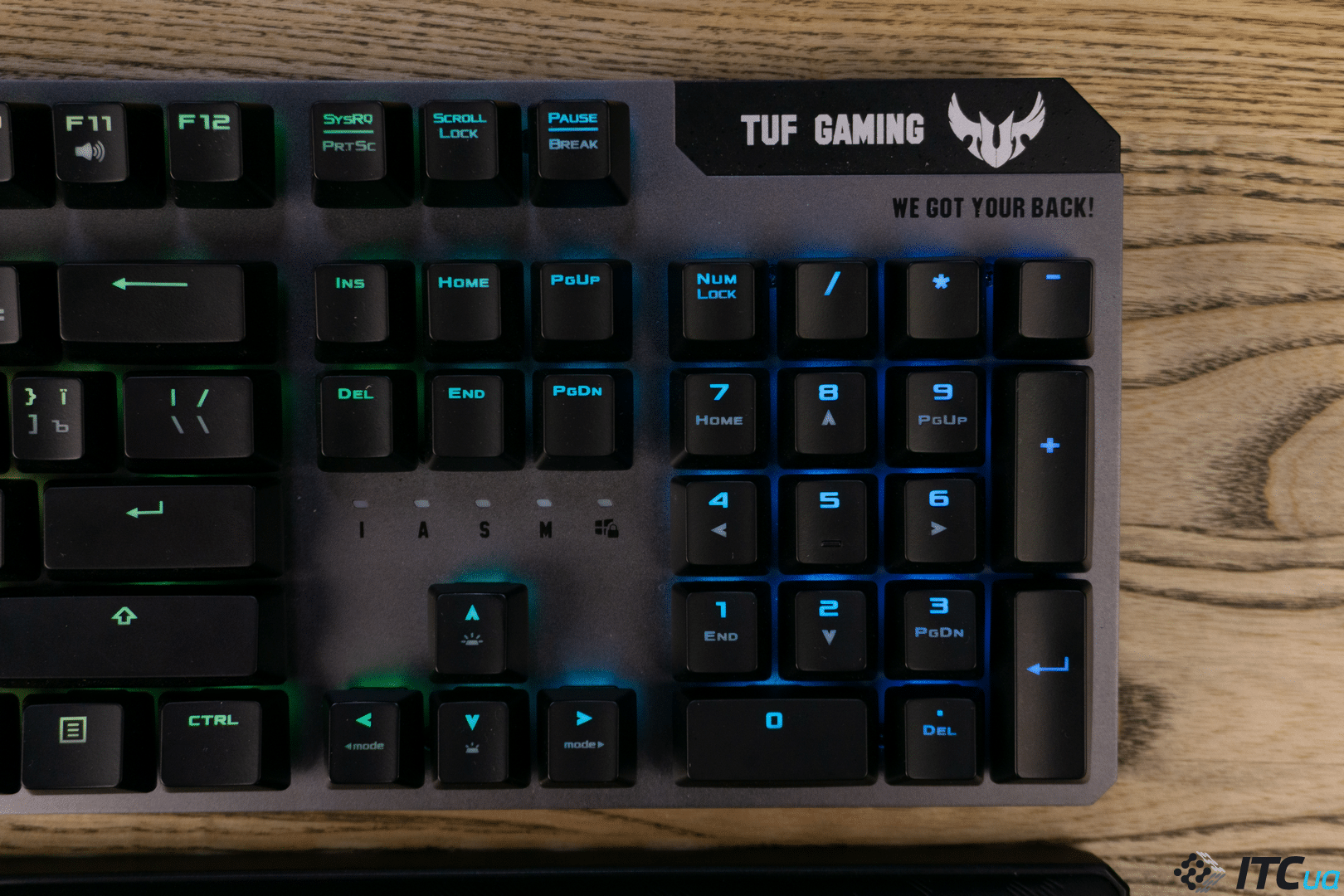 According to the specification, the keyboard can be wiped with a damp cloth and even spilled on it with a glass of water without fear of damaging the electronics. What’s more, according to ASUS, the keyboard circuit board is also protected by a special coating that protects it from moisture. But how protected are the switches themselves – the question. 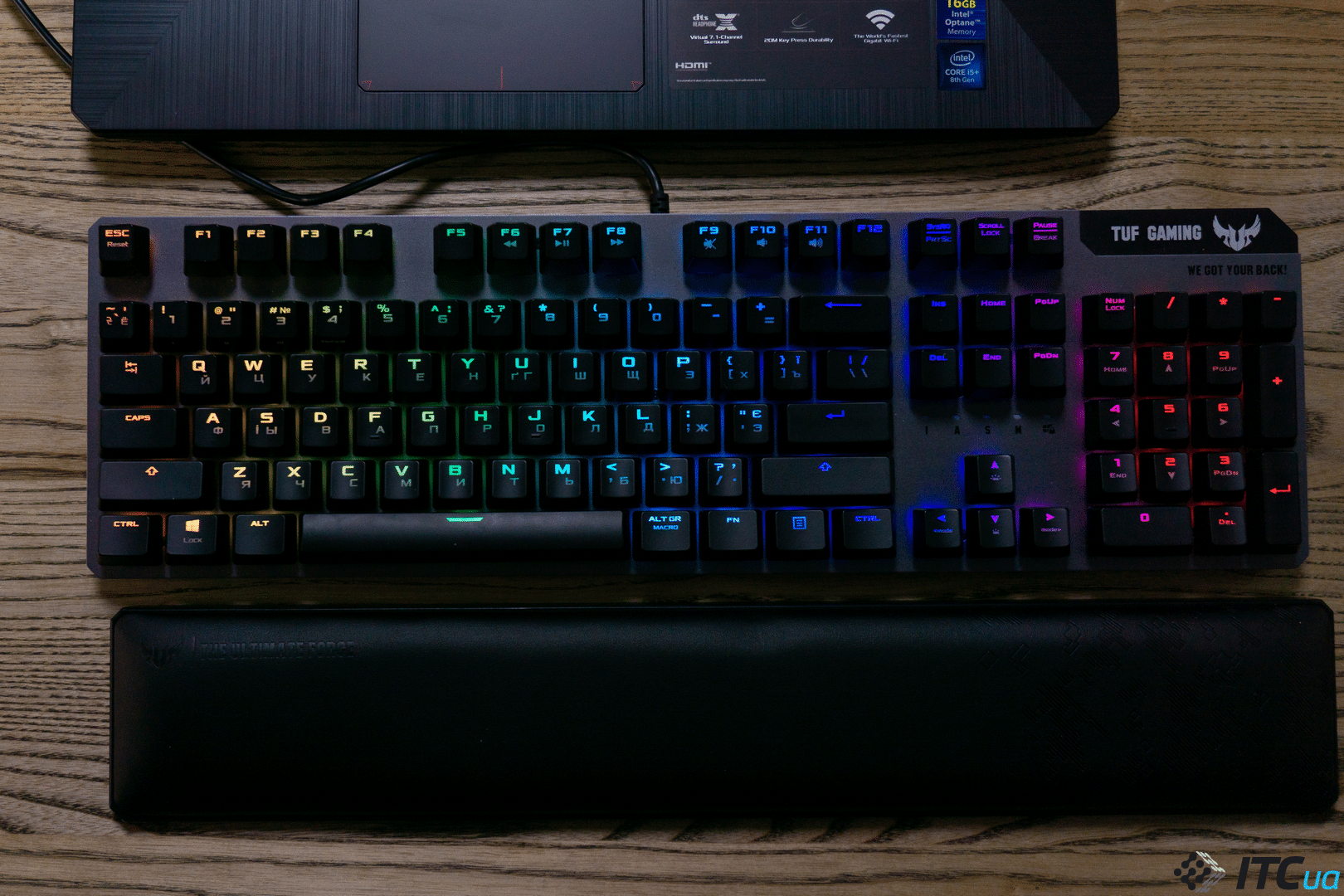 ASUS TUF Gaming K7 is equipped with two types of switches to choose from – linear or tactile feedback. In both cases, optical-mechanical LK keys from A4Tech are used. We have already met with them. Their principle of operation is slightly similar to the usual “mechanics”, except that an interruption of the laser beam is used to register pressure. Which, in turn, made it possible to increase the reliability of the switch. The service life of LK is declared at the level of 100 million clicks. 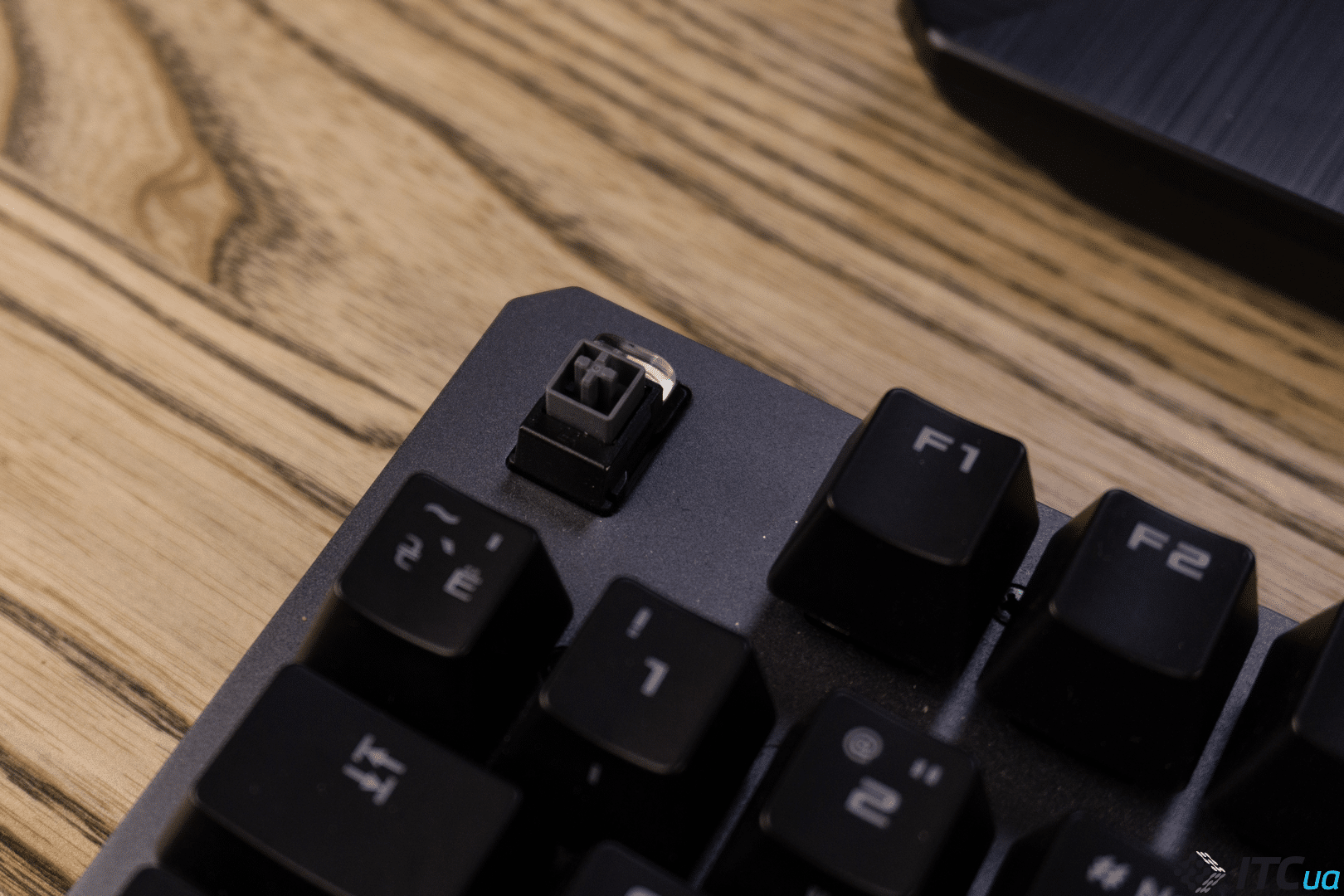 In the test sample, linear switches were installed, without tactile feedback and audible response. The force required to press is 47 grams, the stroke is 3.55 mm, and the operation occurs at around 1.5 mm. It feels like even less force is required to press the keys – they are very easy to press, almost like Cherry MX Red. What else I want to note is the silence in the work. Yes, when you press it all the way, you will hear the sound of the cap hitting the case, but it also seems muffled compared to models on Cherry MX. 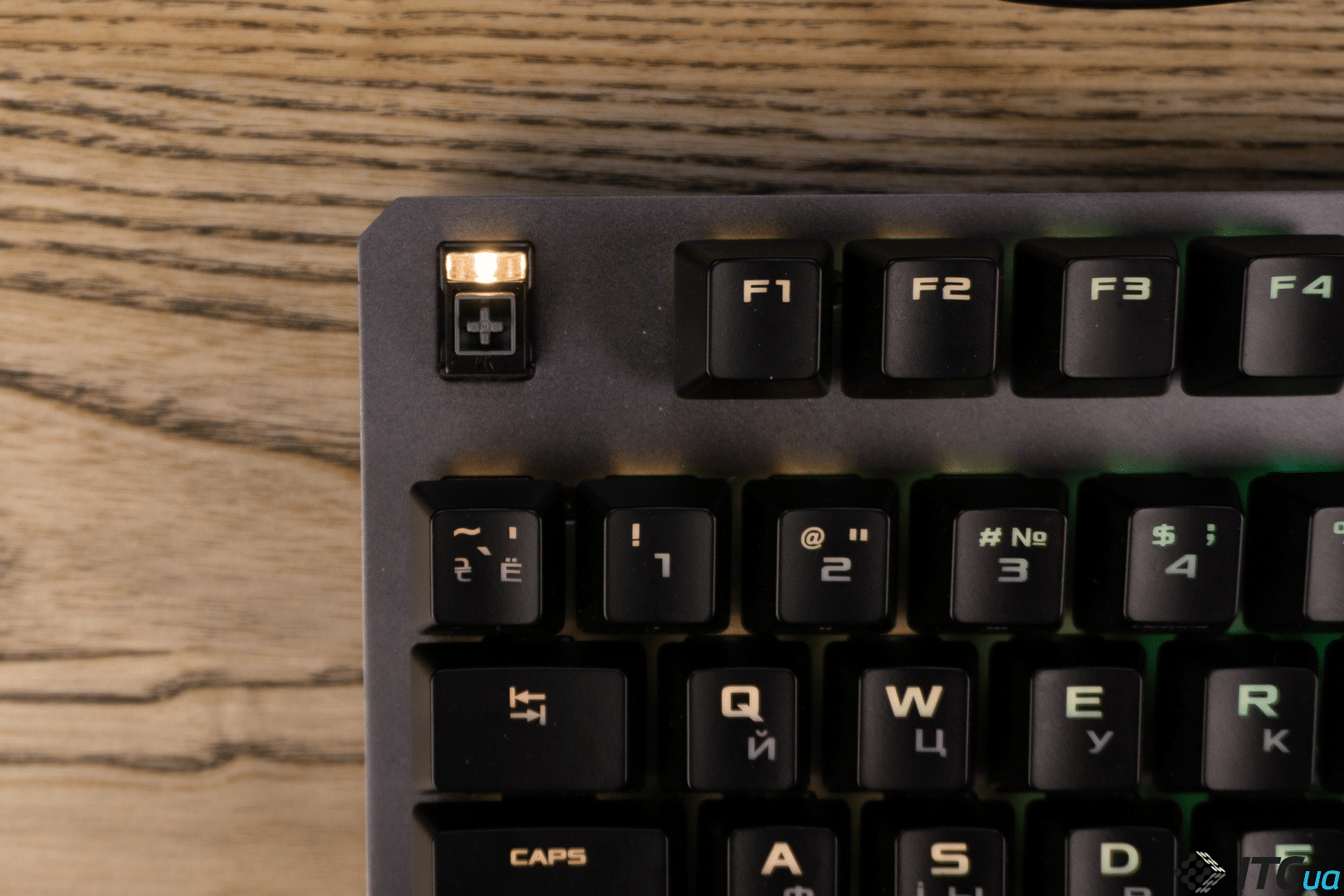 Each switch is equipped with a backlight at the top, so that the Latin characters are highlighted a little better than the Cyrillic ones. By the way, it is worth noting the fact that the keyboard is fully localized for the Ukrainian market. 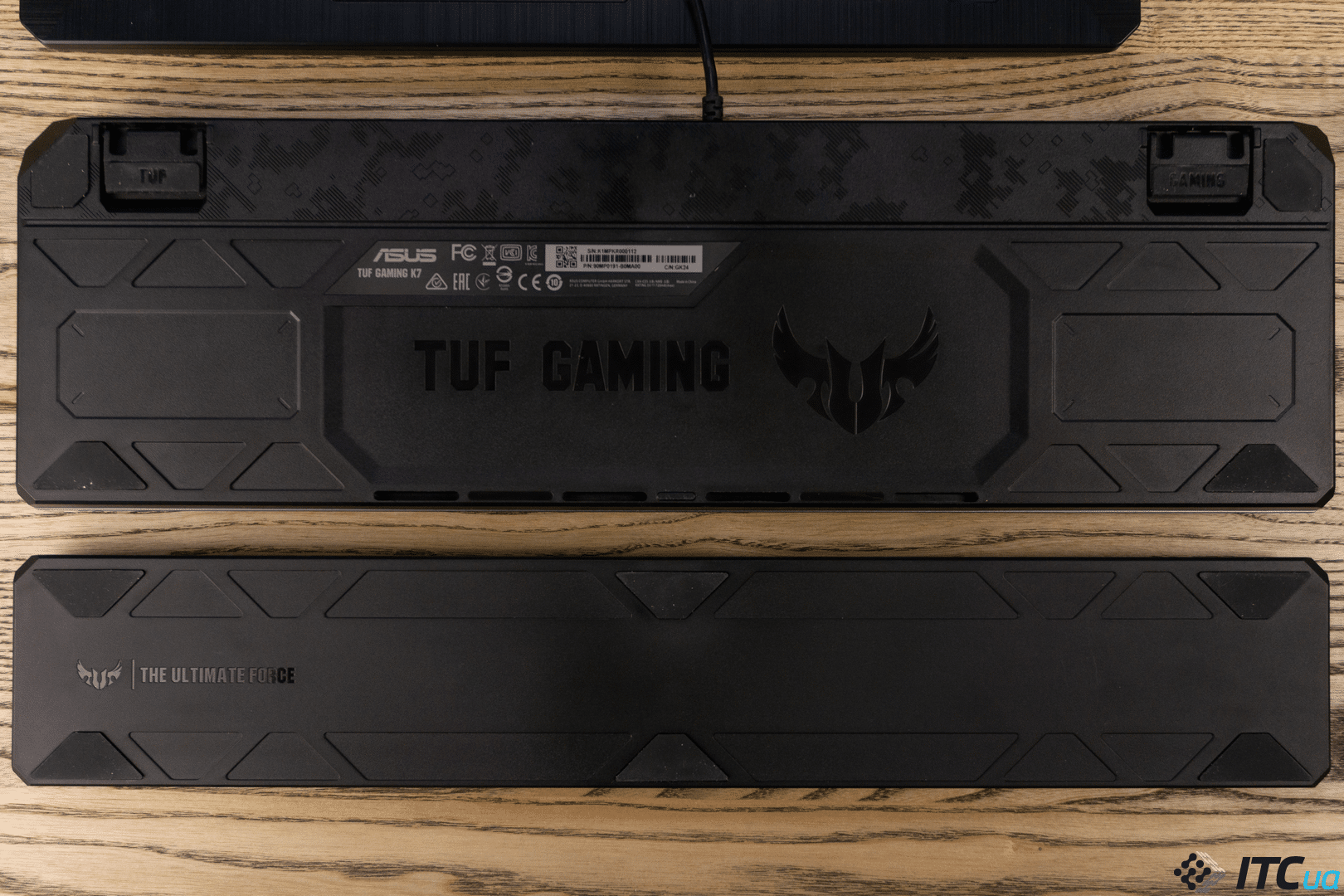 ASUS TUF Gaming K7 has the ability to control RGB lighting directly on the keyboard and create macros and save them to three built-in profiles. All the same can be done in the ROG Armory utility, with the difference that it is much more convenient and understandable in it. Well, besides, it will be required to synchronize the backlight with other ASUS components.

Conclusion: While using the ASUS TUF Gaming K7 keyboard, I found almost no flaws in it. You can only find fault with the lack of dedicated multimedia keys, here switching tracks is implemented using the Fn modifier. And so, this is a well-equipped mechanical keyboard with moisture protection and convenient switches. The latter are great for both games and typing. They especially liked the softness of the move and the relative silence in the work. In general, ASUS TUF Gaming K7 turned out to be very good and deserves attention at an acceptable cost in Ukraine.