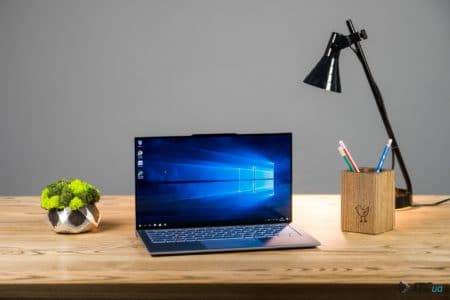 Earlier this year, ASUS introduced the 13.9-inch ZenBook S13, which stands out from the competition with thin bezels around the screen and, accordingly, a compact body. At the same time, the model promises good performance due to the Intel Core i7 processor, as well as NVIDIA MX150 mobile discrete graphics. Let’s see if this is really the case.

During the development of the ZenBook S13, ASUS decided to take the best from last year’s flagship ZenBook S and ZenBook 13 models. From the first, the new laptop received a case with a thickness of only 12.9 mm, and from the second, compact dimensions, with a diagonal of almost 14 inches, it is smaller than most 13-inch models. 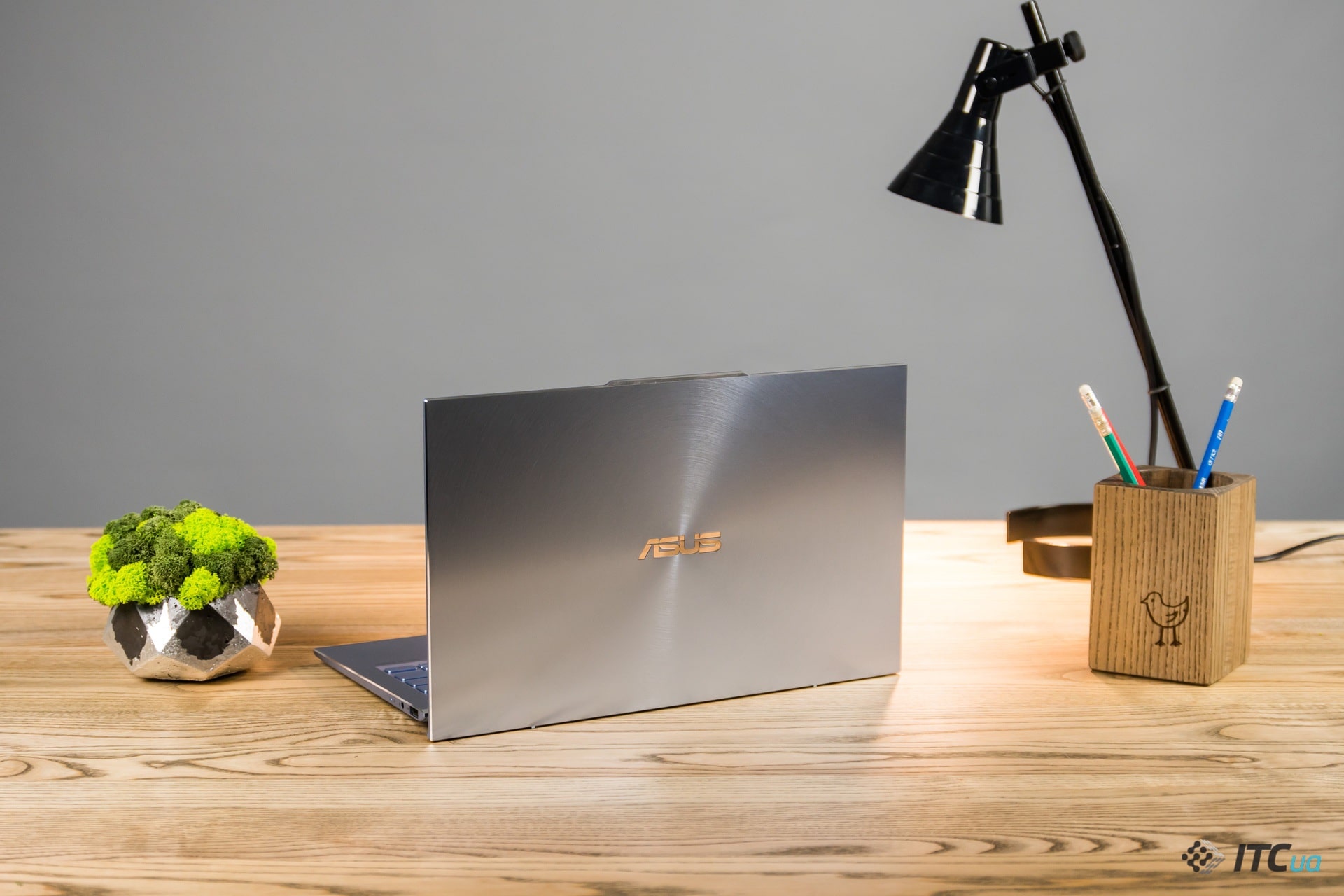 When you open the device, the first thing that catches your eye is the very thin bezels around the screen, even by modern standards, which are 3.5 mm on the sides and 3.6 mm on top, with the exception of the protruding block with the camera and microphones, which is 5 .9 mm. 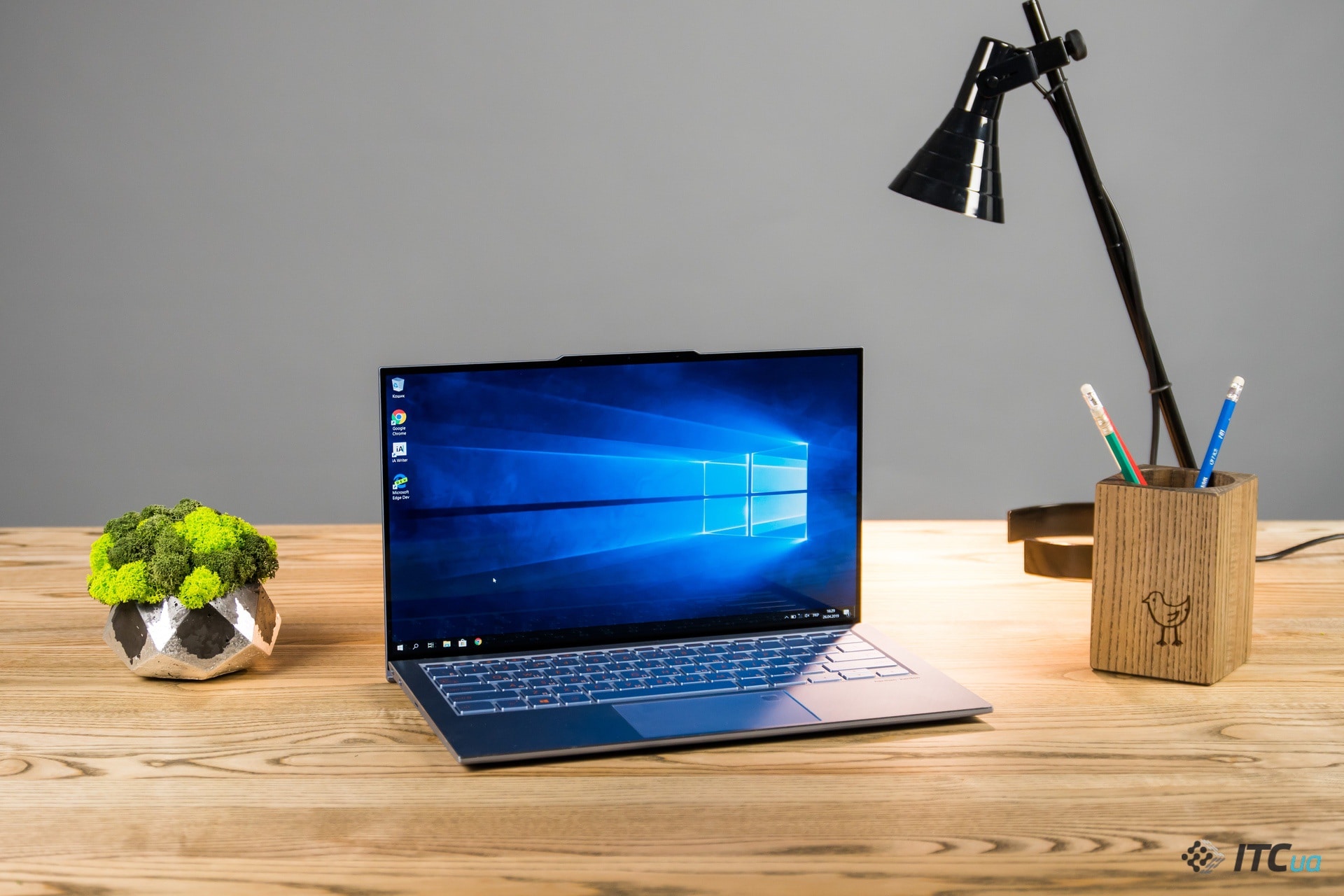 This interesting approach gave ASUS the opportunity to distinguish the ZenBook S13 from other models with thin frames, and also not to experiment with placing the camera at the bottom of the display. At the same time, the protrusion formed above the screen had a positive effect on ergonomics; it is convenient to hold on to it when opening the laptop, which, by the way, can be opened with one hand. 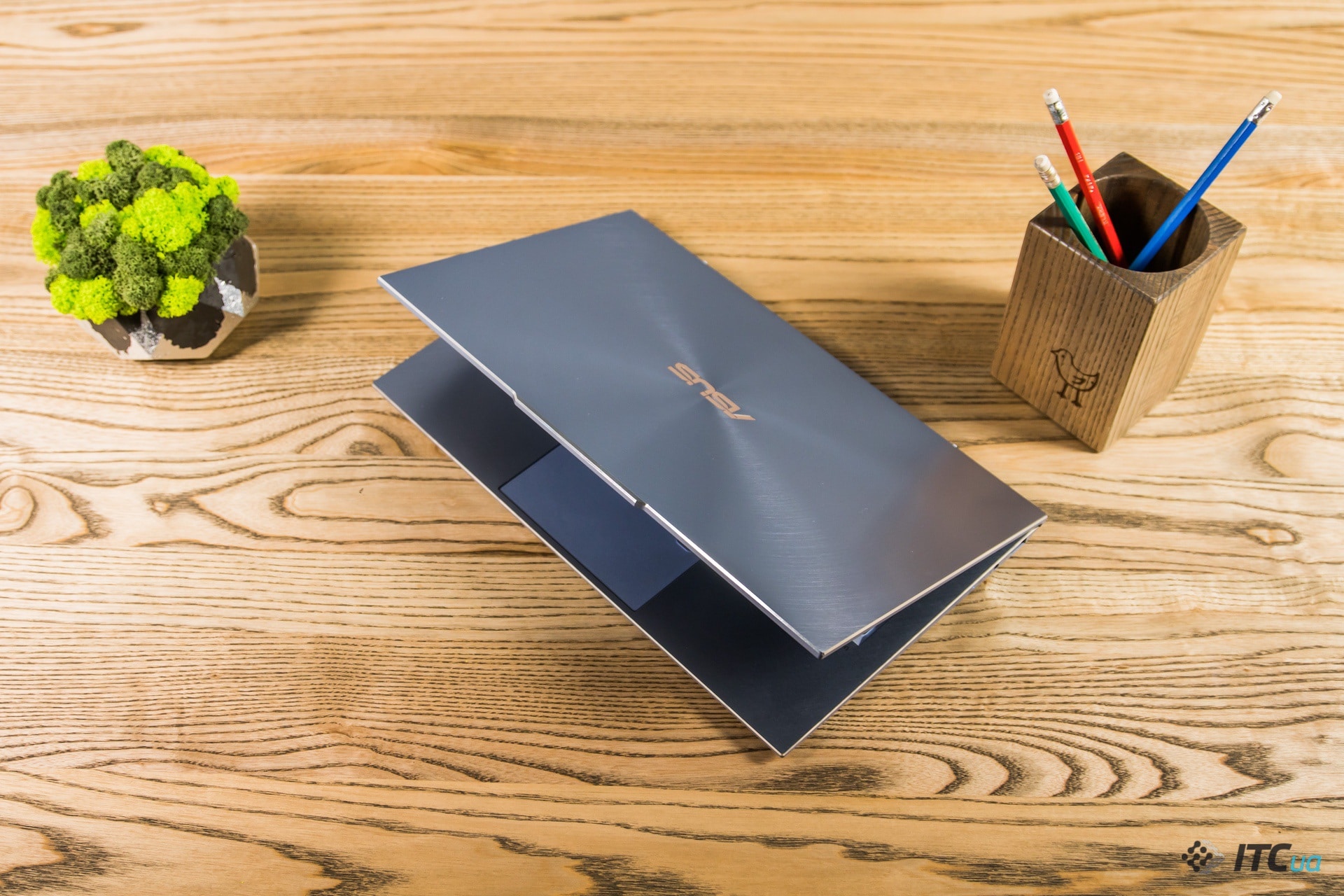 The screen block cover is made of polished aluminum with branded concentric circles that diverge from the ASUS logo. 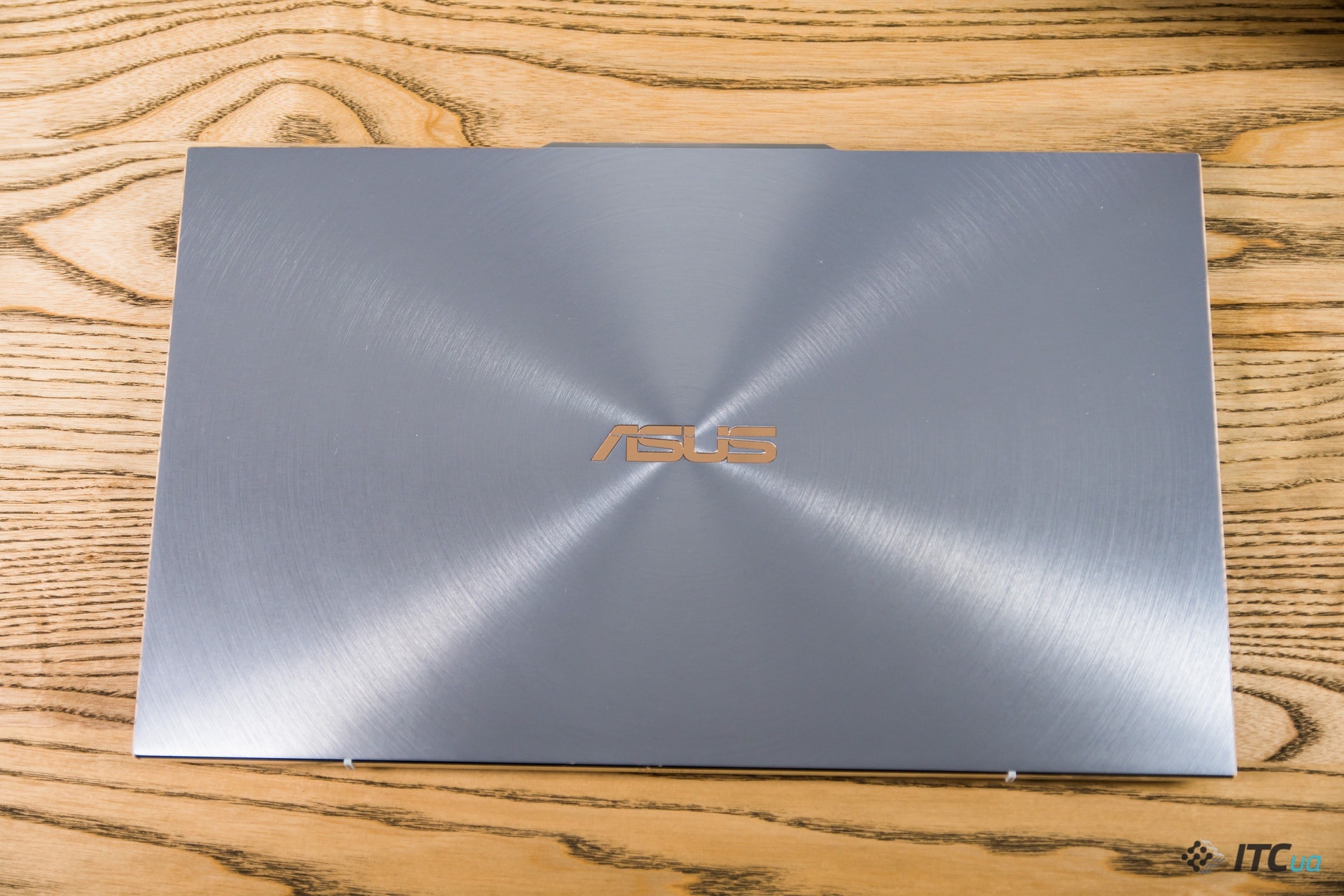 At the same time, it is larger than the base with the keyboard, so when the laptop is opened, the latter rises slightly. The company calls this mechanism ErgoLift, and it actually tilts the keyboard, making it more comfortable to type on. 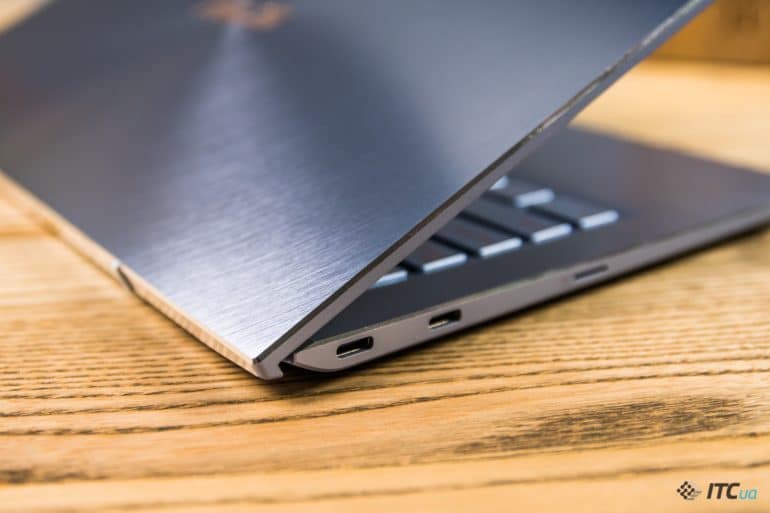 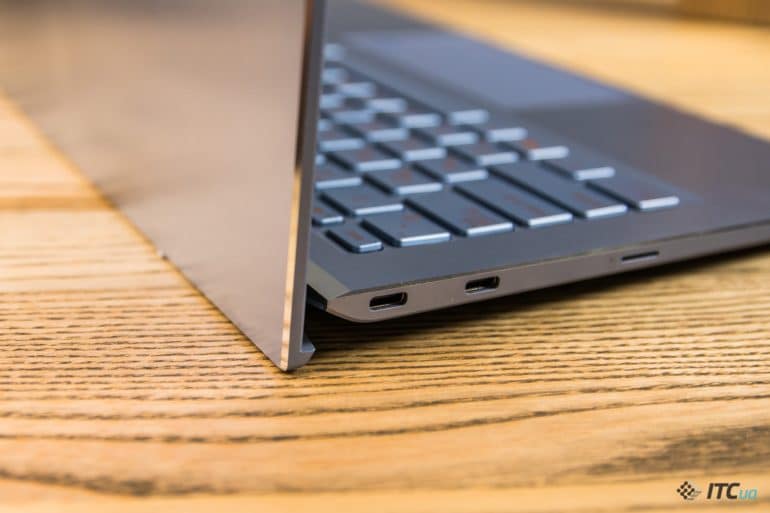 Despite this design, the hinge holds the display well in any position, so even if you press the keys hard, the screen lid will not collapse and, moreover, will not lean back. 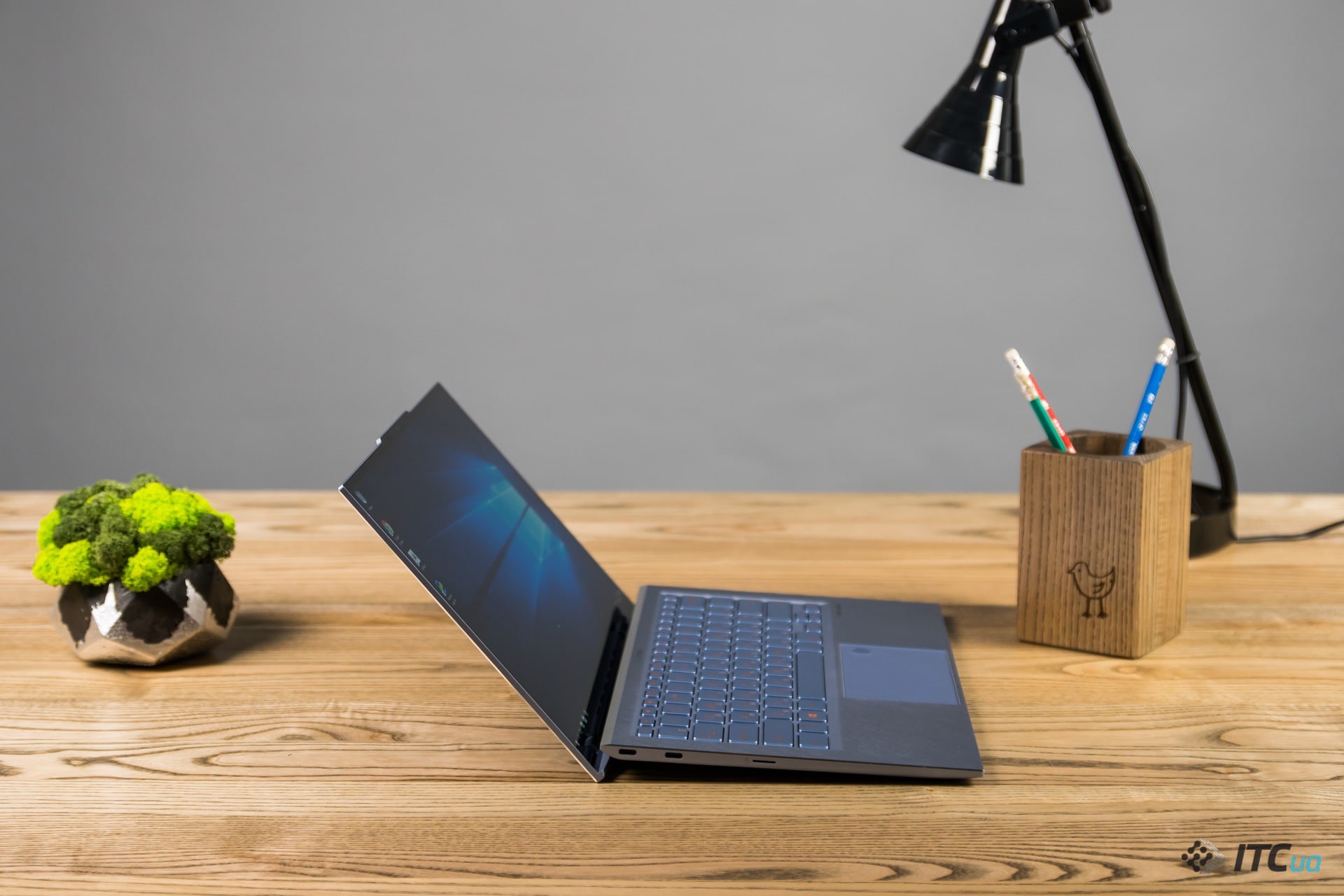 As mentioned above, the display unit cover in the ZenBook S13 is made of aluminum, and the screen itself is covered with a protective glass. Thanks to this, it turned out to be quite rigid and does not squeeze through, even if you press the lid with force. 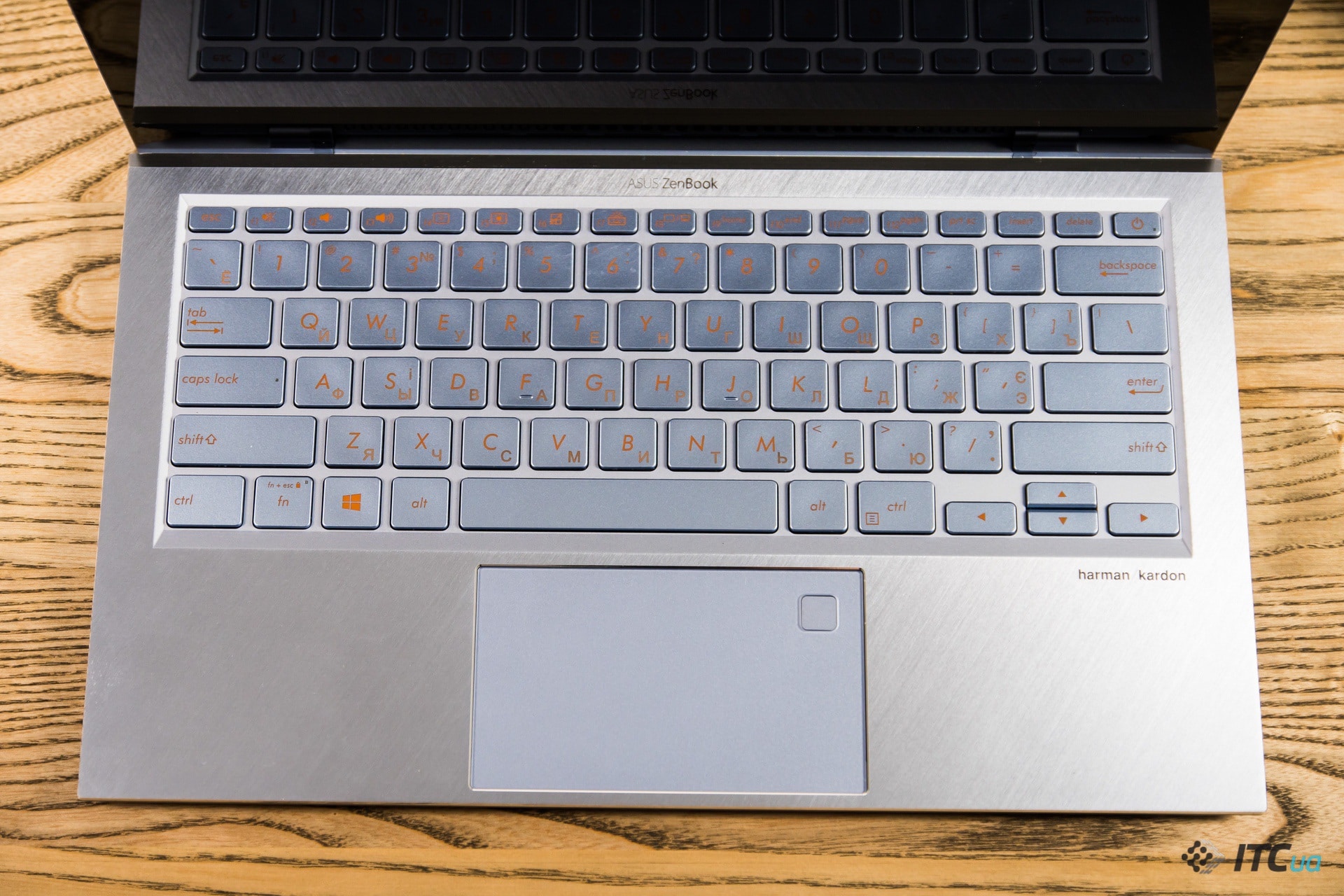 The area around the keyboard is also made of brushed metal, while the lower case is made of magnesium alloy. This selection of materials allowed ASUS to achieve a relatively low weight – 1.1 kg. 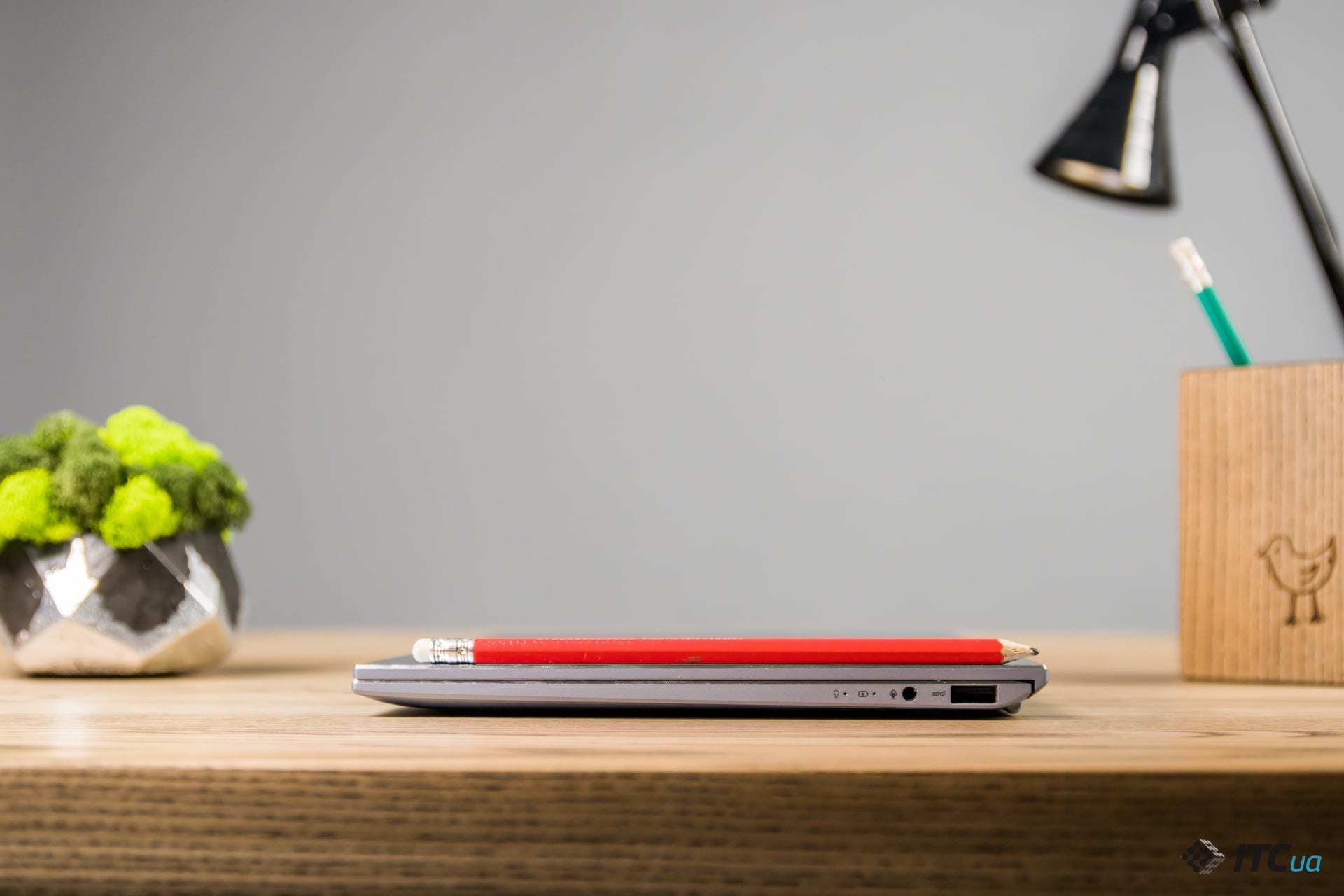 Overall, I liked the ZenBook S13 both in terms of design and materials. The laptop looks really modern thanks to the thin bezels around the screen. The protrusion of the camera at the same time does not spoil the appearance of the device, and even makes it more recognizable.

The thin body of the ZenBook S13 has affected the available connectors, there are very few of them. On the left side, the user has two USB Type-C ports with support for fast charging and the ability to connect a monitor, but, unfortunately, without Thunderbolt. You’ll also find a microSD card slot here, another controversial choice given that smartphone users don’t often take their cards out of their devices and photographers and cameramen would prefer an SD card reader. 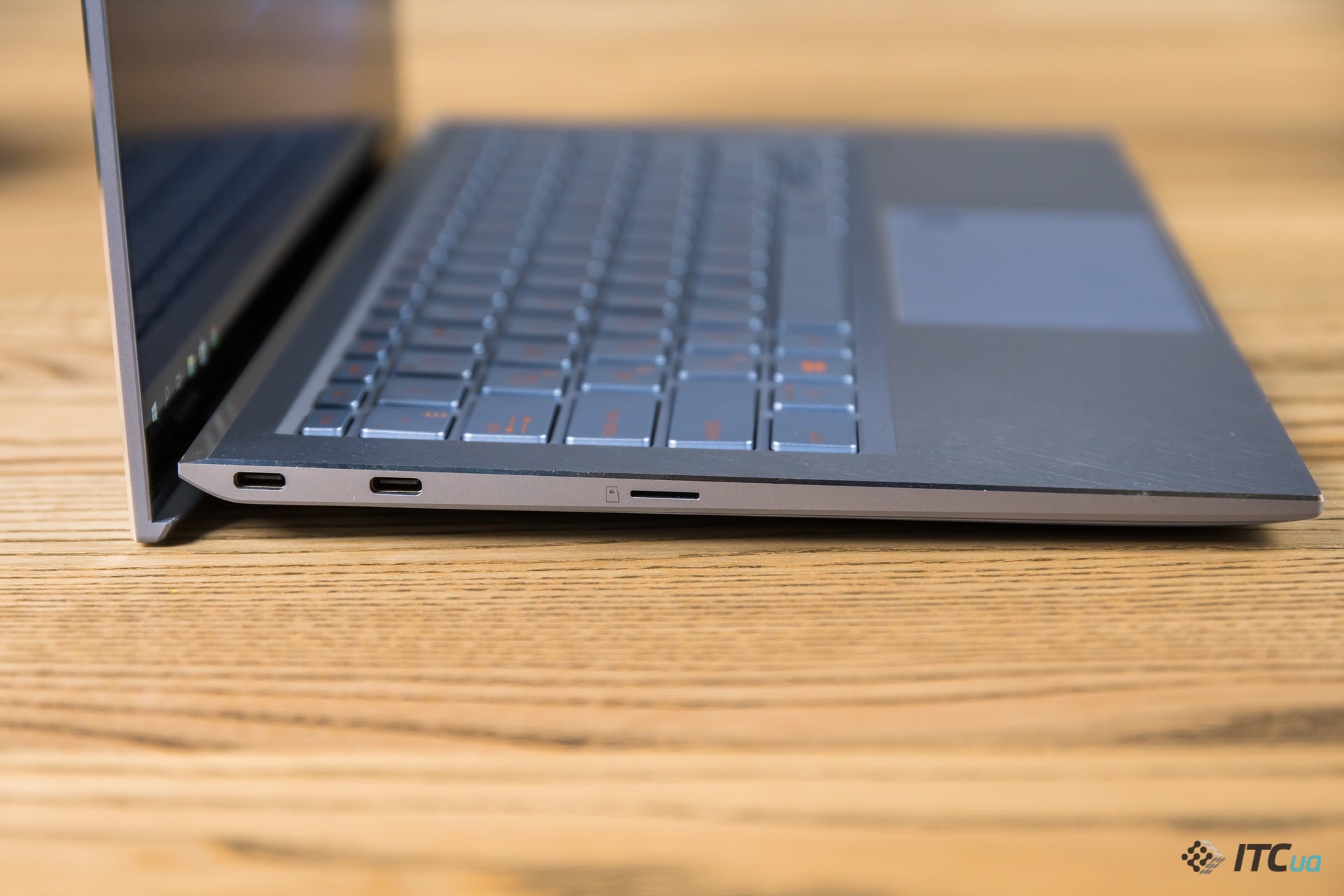 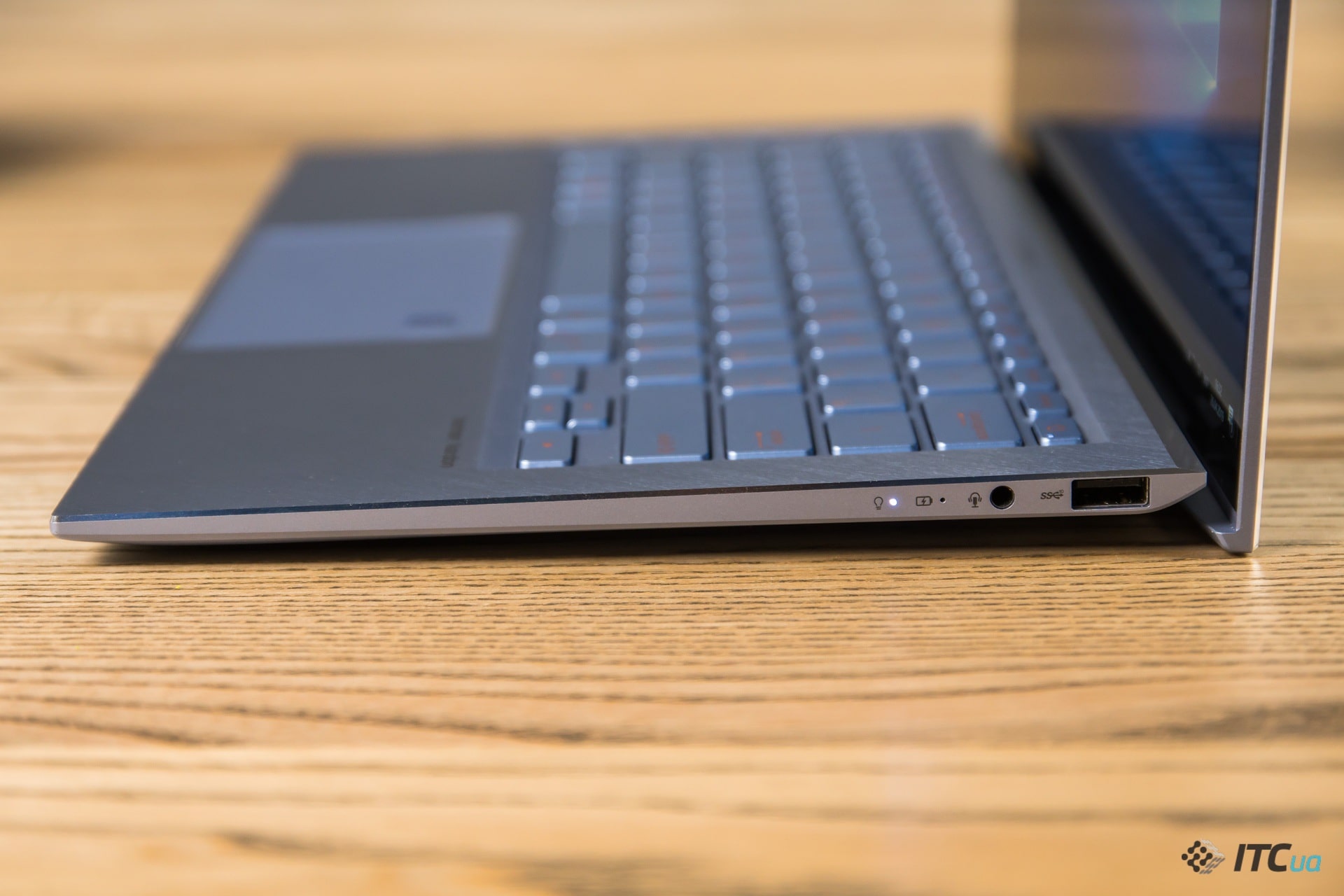 As you can see, there are not very many ports in the ZenBook S13, but two USB Type-C allow you to expand the connectivity of peripherals through the use of adapters.

ASUS ZenBook S13 is equipped with a 13.9-inch IPS-display with a resolution of 1920×1080 pixels, covered with glass. According to our measurements, the maximum brightness of the screen is 420 cd/m2, and the minimum is 22 cd/m2, which is a good result. The device does not have automatic brightness control, but the available range allows you to manually adjust it for comfortable use.

The screen is factory calibrated at a good level, the matrix itself provides a color gamut of just over 100 sRGB with a bias towards red and green, while blue drops out a little, which also affects the color temperature. It is “warm” here, at the level of 5500K, but if desired, it can be made “colder” through the ASUS Splendid application.

ASUS ZenBook S13 came to my test in the maximum configuration with a 4-core Intel Core i7-8565U processor running at 1.8 GHz (4.8 GHz in Turbo Boost mode), 16 GB of LPDDR3 RAM, 512 GB SSD from Western Digital, as well as NVIDIA GeForce MX150 discrete mobile graphics, which switches to the integrated Intel HD Graphics 620 when the laptop is running on battery power. 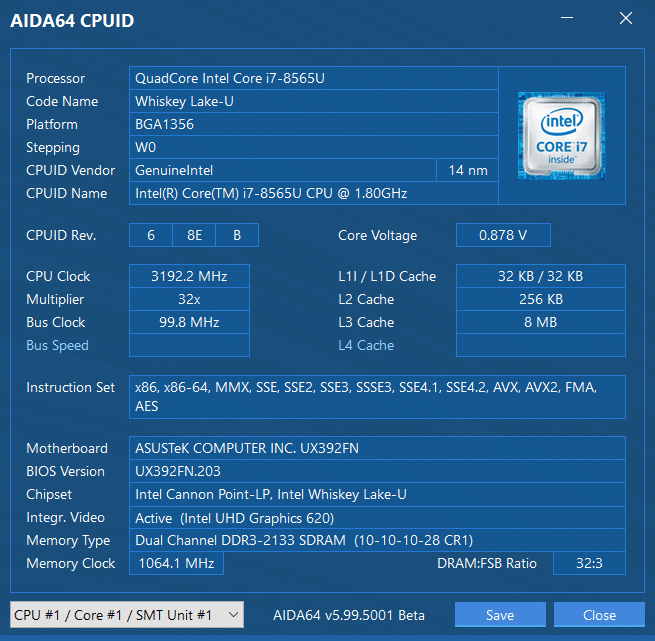 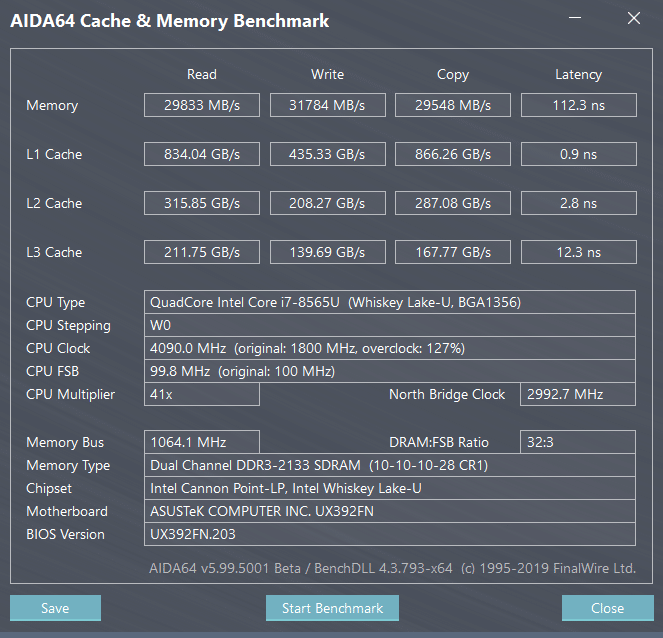 Although the ZenBook S13 is a new model, it shares a platform with the ZenBook 13, introduced last September. Accordingly, the performance of the processor and graphics in these laptops is on the same level. But it is important to note that ASUS has used all the components that are relevant for devices of this class, there is no more efficient processor and other discrete graphics for such compact laptops yet. And there is no need to complain about the performance of the ZenBook S13, it works very quickly.

In the PCMark 10 performance test, the laptop scores 3958 points, which is more than the ZenBook 14 in a similar configuration. However, the latter turns out to be a little faster in the video, most likely due to more efficient graphics cooling. 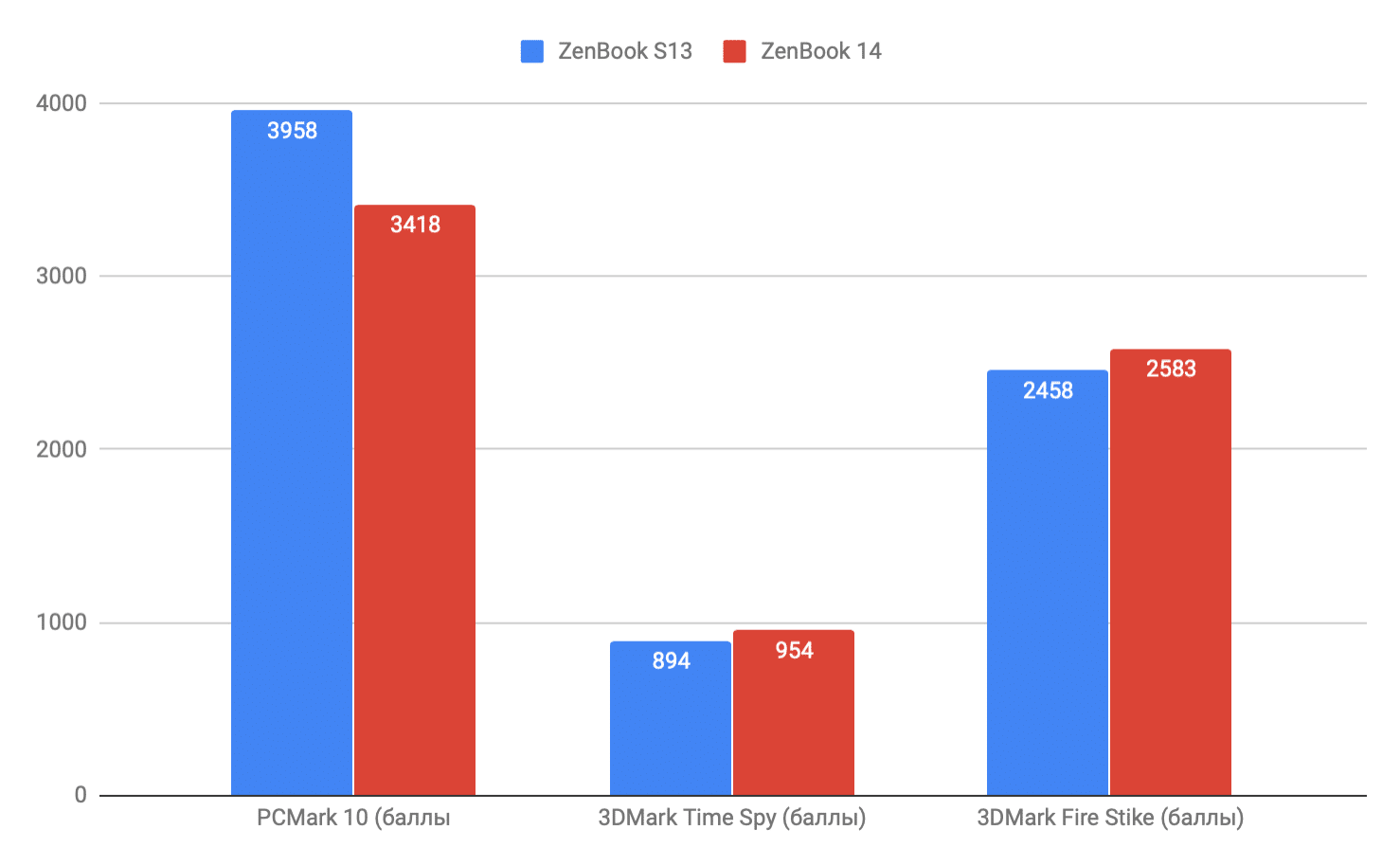 As mentioned above, the ZenBook S13 test configuration has a 512 GB SSD, which shows high read and write speeds. 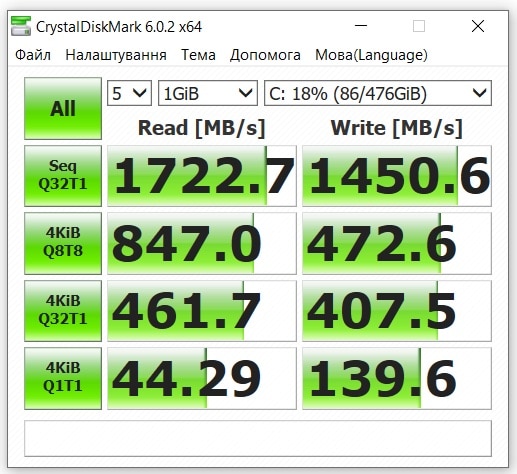 As for the NVIDIA GeForce MX150 video accelerator, it was announced back in mid-2017, and was conceived as a version of the basic GeForce GTX1030 desktop video card for laptops.

At the same time, the ZenBook S13 uses an energy-efficient version of the GeForce MX150 with a TDP of 10 W and a frequency of 937-1038 MHz, respectively, it allows you to speed up the work of photo and video editors, but is not intended for games. Although the old games, from the category of the first two Mass Effect, the laptop will pull without problems.

The compact dimensions did not prevent ASUS from installing an efficient cooling system in the ZenBook S13; in the stress test of the system, using AIDA64, the processor cores under 100% load heat up to a maximum of 82 degrees Celsius. 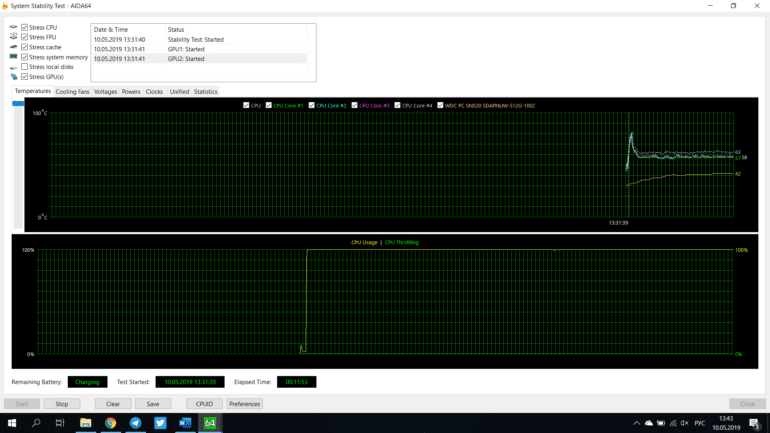 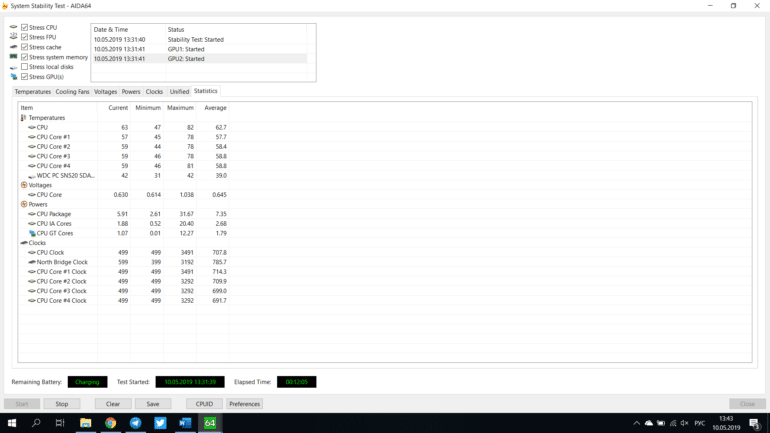 There is no throttling, and the laptop case becomes warm, but not hot. The area below the keyboard heats up to 31-34 degrees Celsius. The hottest is the upper part of the case, but even here its temperature is acceptable 38-41 degrees Celsius. 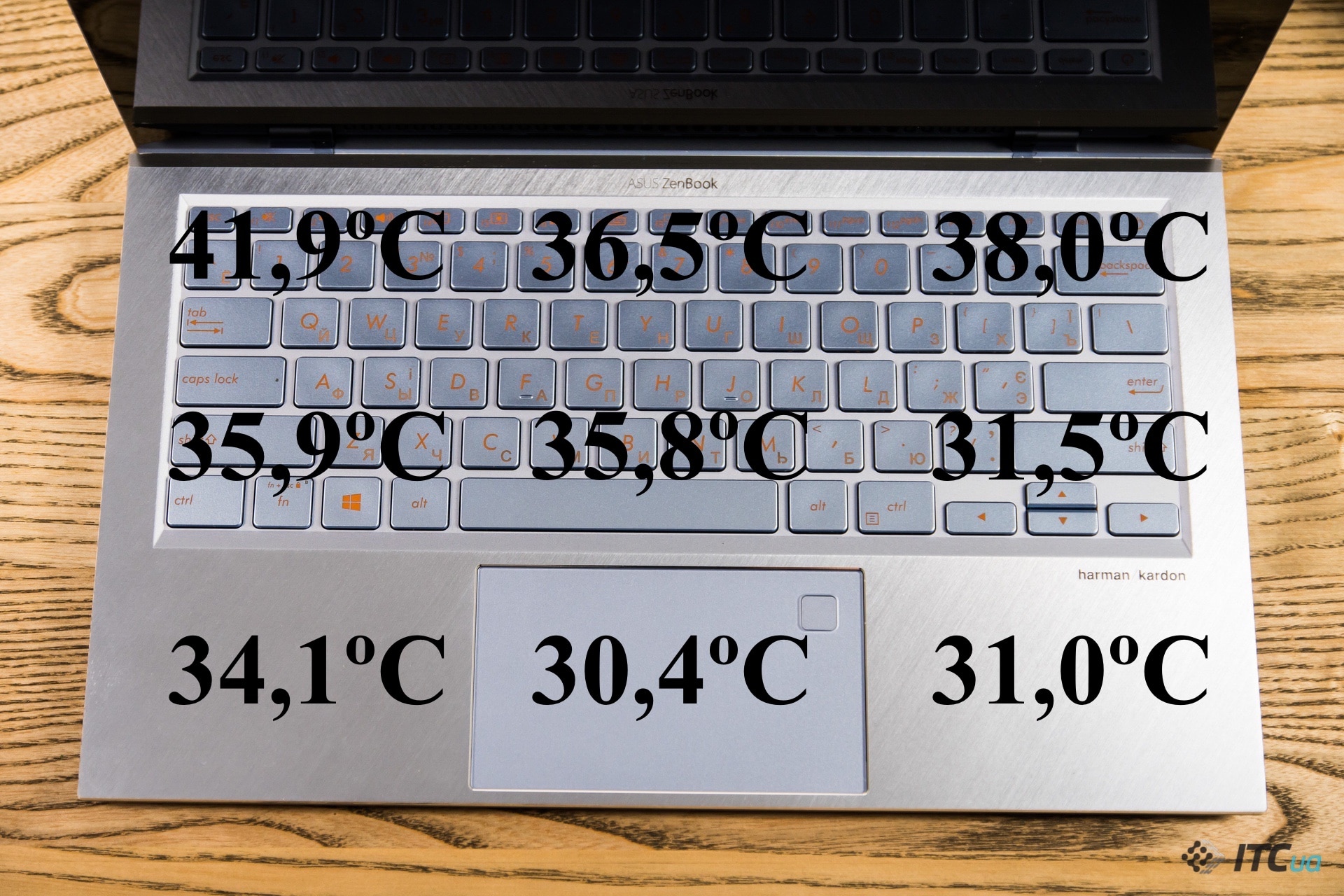 The ZenBook S13 has two cooling fans inside the case, and they almost never turn on during normal use. But even under high load, they are not noisy enough to annoy or distract from work.

The ASUS ZenBook S13 features an island-style keyboard with three levels of backlighting and 1.4mm key travel. The latter are made of plastic and painted in the color of the case. 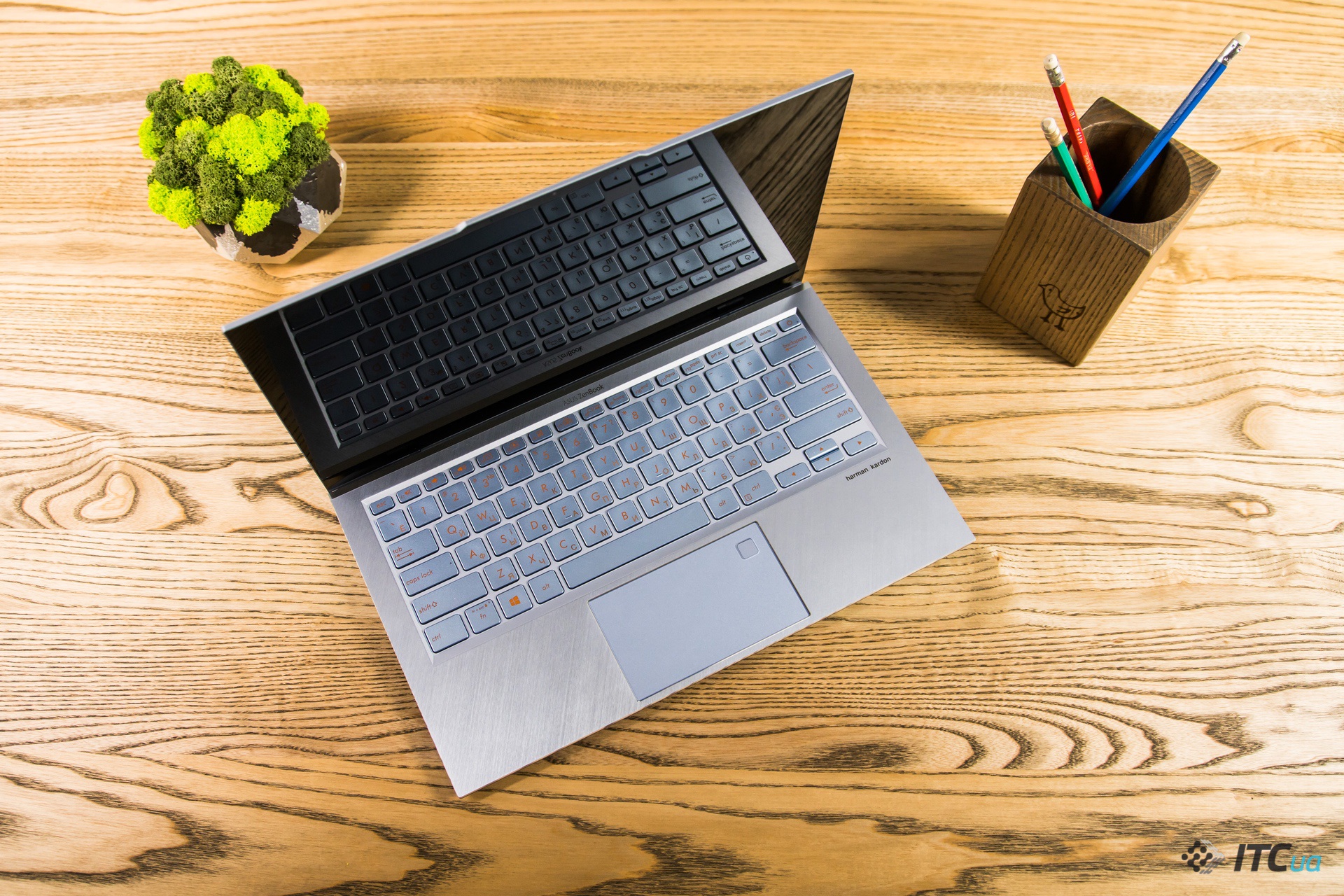 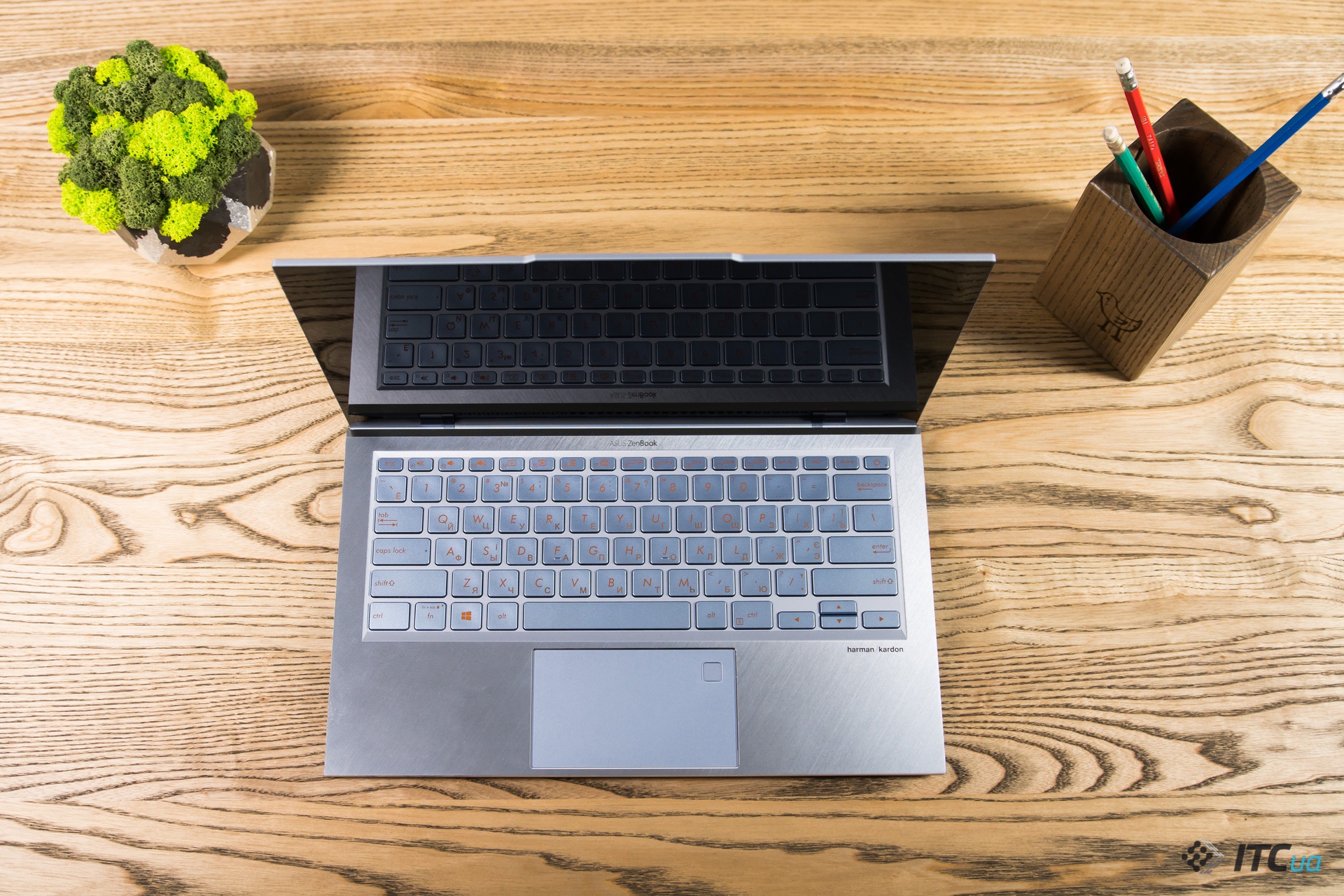 The touchpad in the ZenBook S13 is located in the center of the body below the keyboard, it is not very large by modern standards, but it would be problematic to make it larger with such dimensions. But it is covered with glass and perfectly determines the positioning of the fingers. 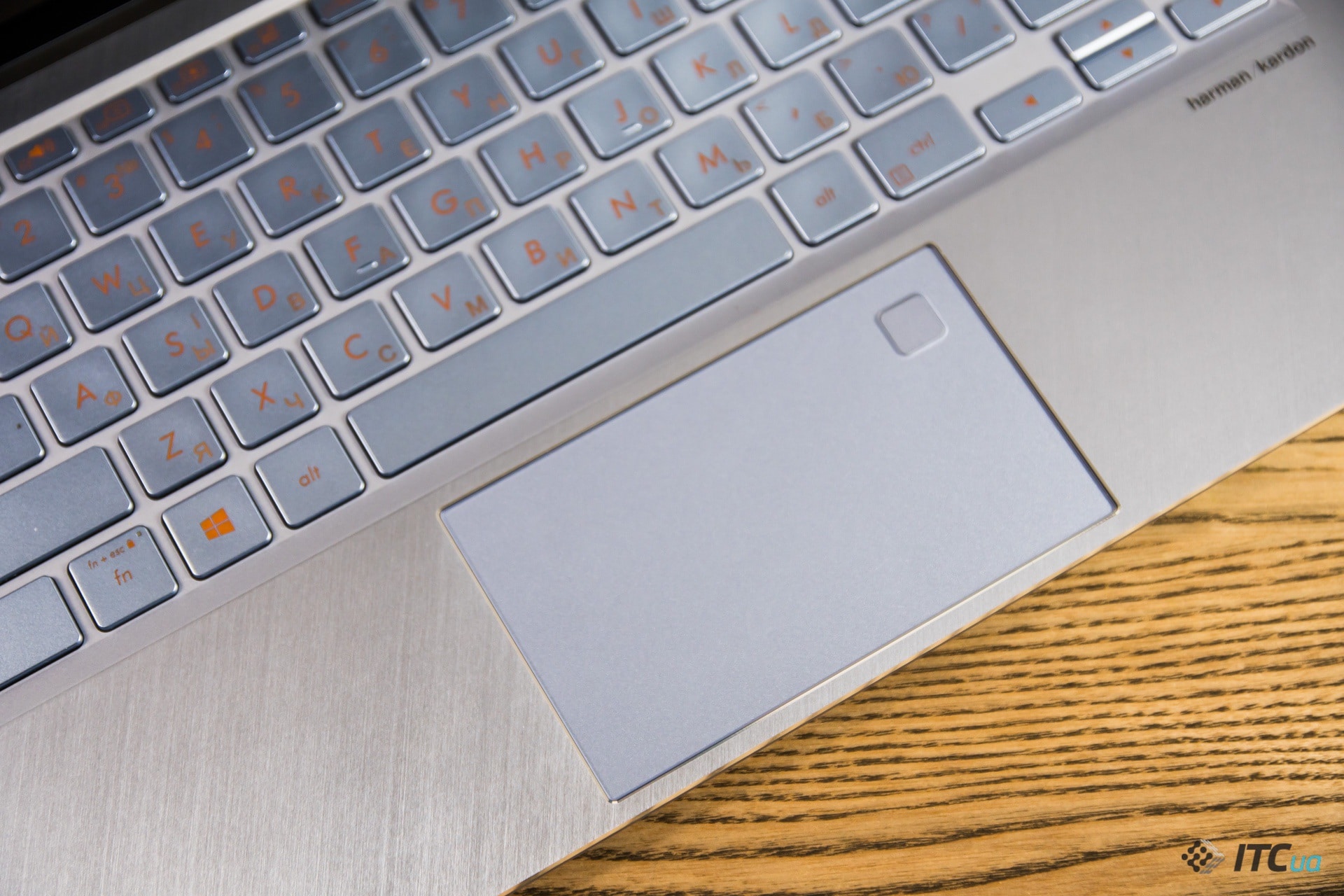 The touchpad could be called almost perfect if it were not for the fingerprint scanner located in its upper right corner, which simply takes away the usable area.
The scanner itself works very well and allows you to unlock your laptop with one touch through Windows 10’s built-in Windows Hello feature.

The ZenBook S13 has two built-in speakers located on the bottom cover and they sound surprisingly loud and clear considering there isn’t a lot of room for them in the case. 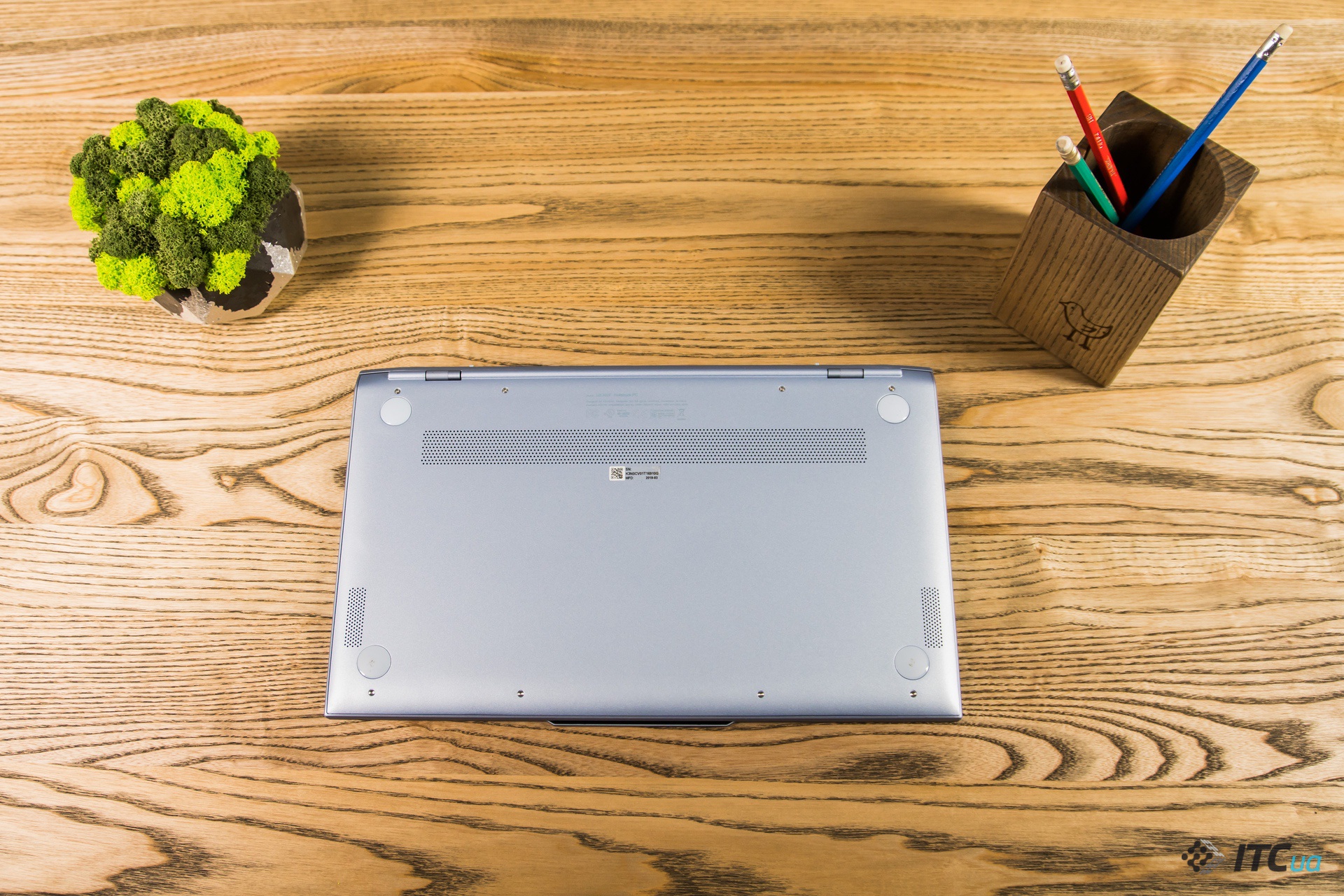 The laptop has a 3.5 mm jack for connecting headphones, and Bluetooth 5.0 for wireless models.

The ZenBook S13 has a built-in 50 Wh lithium-ion battery. Unfortunately, the PCMark 8 autonomy test on my test laptop crashed after a few hours of work, so it was not possible to measure autonomy in the synthetic test. But in real use, when working with a browser, instant messengers and documents, the laptop lasts almost 8 hours, which is a very good result. 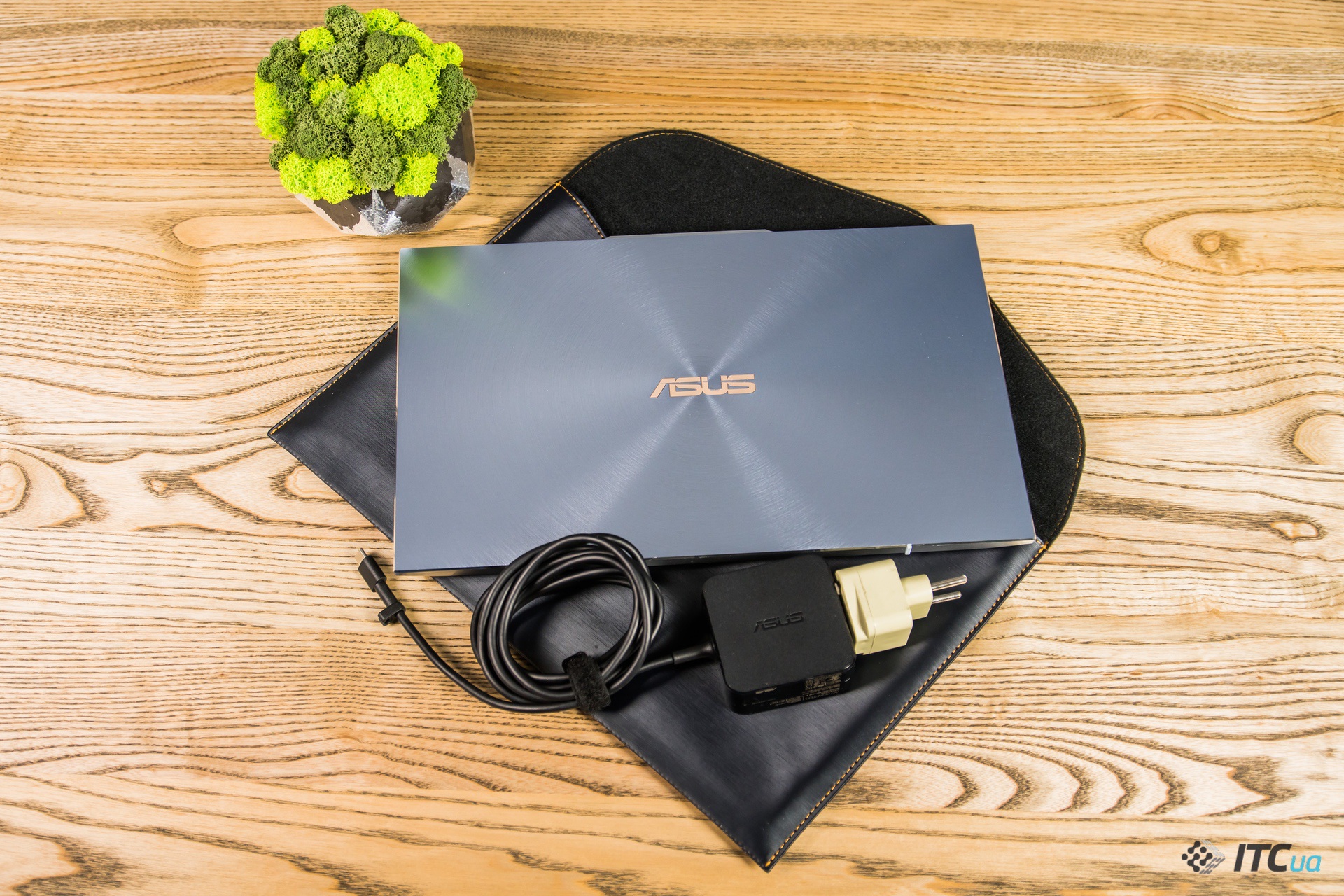 The ZenBook S13 is charged from a 65W power supply via a USB Type-C port, while both of these connectors on the laptop case support the connection of a charger. In addition, the laptop supports fast charging, it charges up to 60% in 50 minutes.

Conclusion: ASUS ZenBook S13 is a flagship 13.9-inch laptop that stands out for its very thin bezels around the display, unusual webcam protrusion, compact size, and good equipment. This model is primarily positioned as a fashion model, so the main focus during its development was on design, while the platform is essentially the same as in a number of compact ASUS laptops released at the end of last – beginning of this year. And this, perhaps, is the main problem of the ZenBook S13, it is noticeably more expensive than the ZenBook 13 and 14, which are not inferior to it in terms of performance and workmanship, although they look less impressive. However, if you look at the fashion laptop market as a whole, then the new ASUS flagship will be no more expensive than most competitors with similar configurations, but at the same time it is lighter, more compact and looks more futuristic.