Computex 2022 is being held in a hybrid format, and TechPowerUp has the opportunity to live get acquainted with Gigabyte’s motherboards, which it is preparing for the upcoming Ryzen 7000 processors. The manufacturer brought four models to the event: X670E Aorus Xtreme, X670E Aorus Master, X670E Aero D and X670 Aorus Pro AX.

Gigabyte plans to release many more different models of boards, including those based on the AMD B650 chipset. But they will have to wait until the release of the Ryzen 7000 series. Some models based on the B650 will not be inferior in cost and equipment to junior solutions based on the AMD X670 chipset. By the way, it should be recalled that the AMD X670 and X670E chipsets essentially consist of two B650 chips. And the difference between the X670 and X670E boards, at least in Gigabyte’s understanding, is the PCIe 5.0 support of the PCIe x16 video card slot. 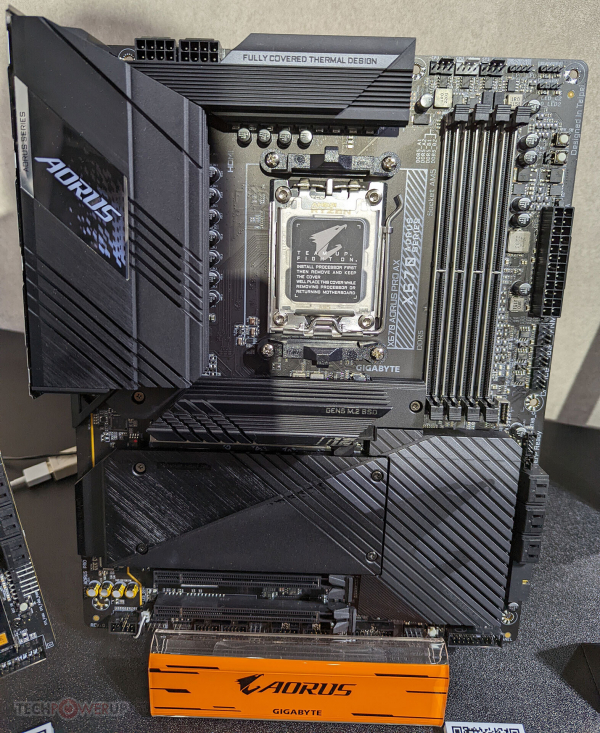 The X670 Aorus Pro AX turned out to be the youngest board shown by the company. The manufacturer also plans to release an Elite version of this model, the Pro version will cost less. The novelty received one PCIe 4.0 x16 slot, one PCIe 4.0 x4 and one PCIe 3.0 x2. The last two, like the first one, use x16 physical execution. 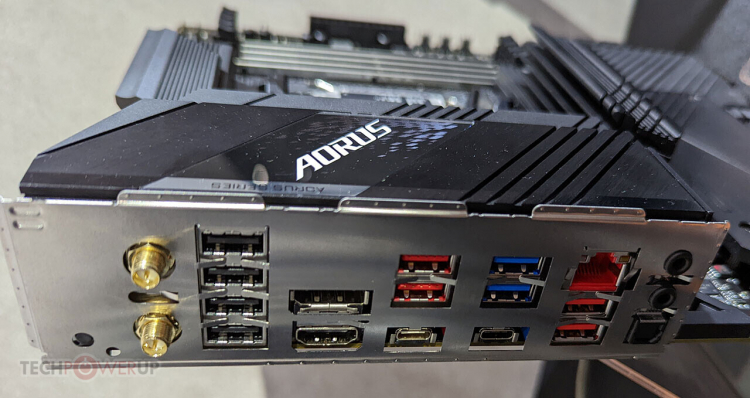 The X670 Aorus Pro AX model received a 16 + 2 + 2 power subsystem (each phase is designed for a current of 90 A), a 2.5-gigabit network adapter controlled by an Intel controller, a module with Wi-Fi 6E support, six SATA III ports , multiple USB Type-A, and one each of DispalyPort and HDMI. Addition are a pair of 3.5 mm audio jacks and one S / PDIF. The board also received half a dozen connectors for connecting additional fans, a BIOS reset button, start and reboot. The expected price is just over $300. 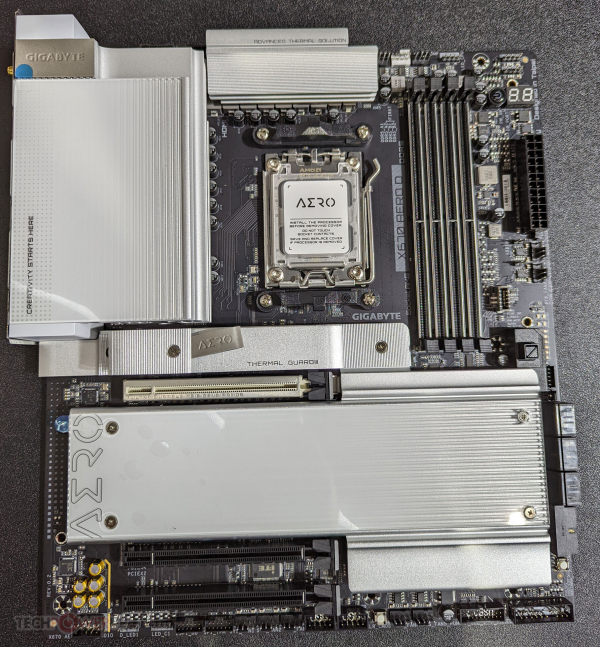 The X670E Aero D model, like previous boards in the Aero series, is aimed at digital content creators or those who value the capabilities of a fast memory subsystem. The novelty received a PCIe 5.0 x16 slot. In addition, this is the only Gigabyte board presented that received support for the USB4 standard. The ASMedia ASM4242 controller provides two USB4 ports on the rear panel. They also support DisplayPort Alternate Mode and comply with the Thunderbolt 3.0 standard. 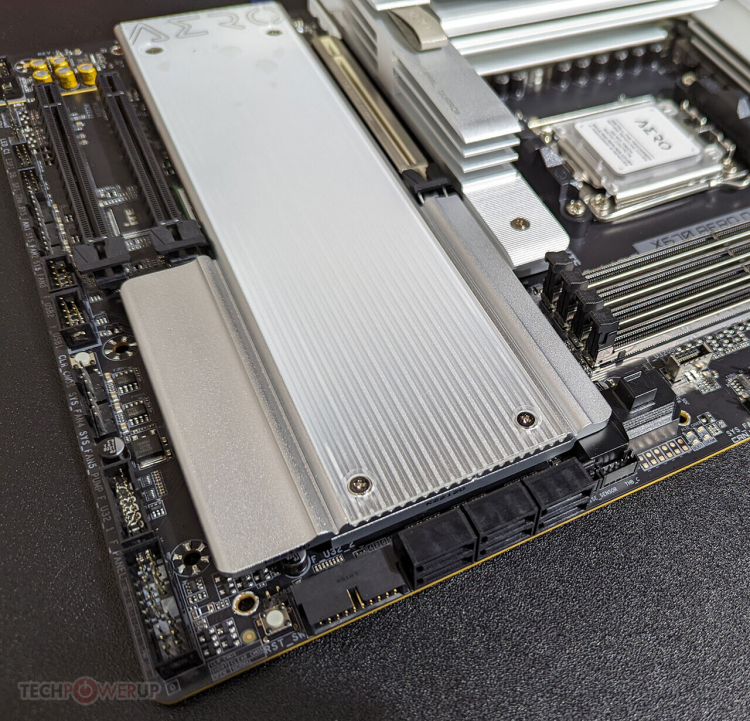 There is also one M.2 PCIe 5.0 slot and three M.2 PCIe 4.0 slots. Gigabyte allowed us to photograph the back of the board, where the SMD components of two X670E chipset chips are visible on the left side, surrounded by four heatsink screws. 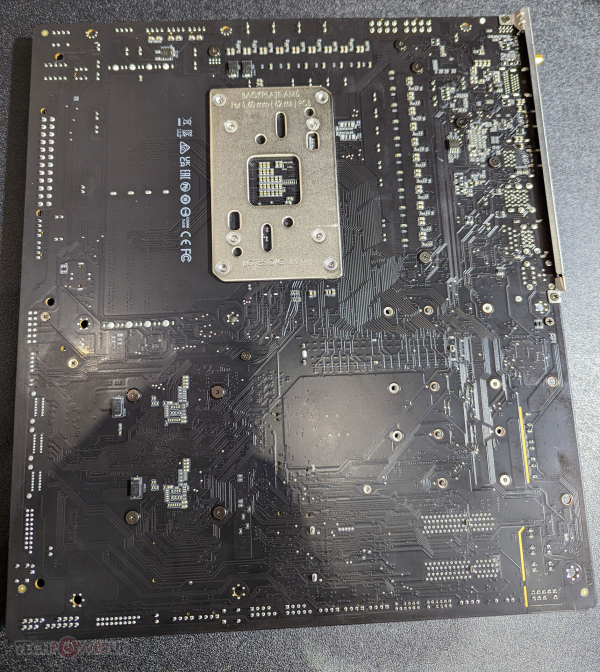 In this new product, the company also introduced the function of quickly dismantling the video card using a special mechanism with a button. This solution first appeared on the models of ASUS Z690 boards for Alder Lake processors. The two bottom PCIe x16 slots of the X670E Aero D are configured the same as the X670 Aorus Pro AX. And in the rest of its capabilities, the model is similar to the board above.

A nice addition here is the POST codes indicator, as well as a small design element in the form of a leather tag with Aero written on the upper M.2 heatsink. The cost of X670E Aero D will be below $400. 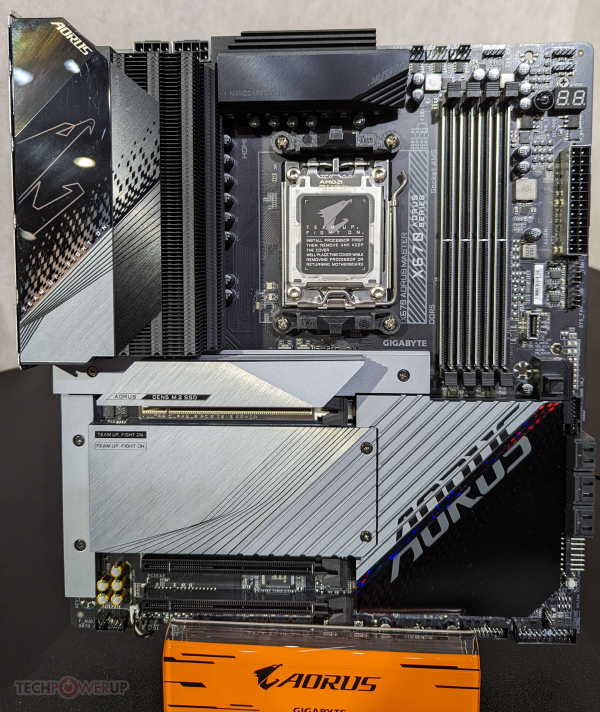 The X670E Aorus Master board did not receive USB4 support, but it is equipped with two M.2 PCIe 5.0 connectors. The model received a VRM power subsystem according to the 16 + 2 + 2 scheme. Each phase is designed for a current of 105 A. A radiator with a heat pipe on power elements draws attention to itself. However, in other respects, this model repeats the characteristics of the X670E Aero D. However, it offers different options for USB Type-C with a transfer rate of 20 and 10 Gb / s.

The 10Gb/s USB Type-C port supports DisplayPort Alternate Mode. The expected cost of the X670E Aorus Master will be slightly lower than that of the X670E Aero D – about $360. At about the same price, the X570S Aorus Master model for Ryzen 5000 was released. 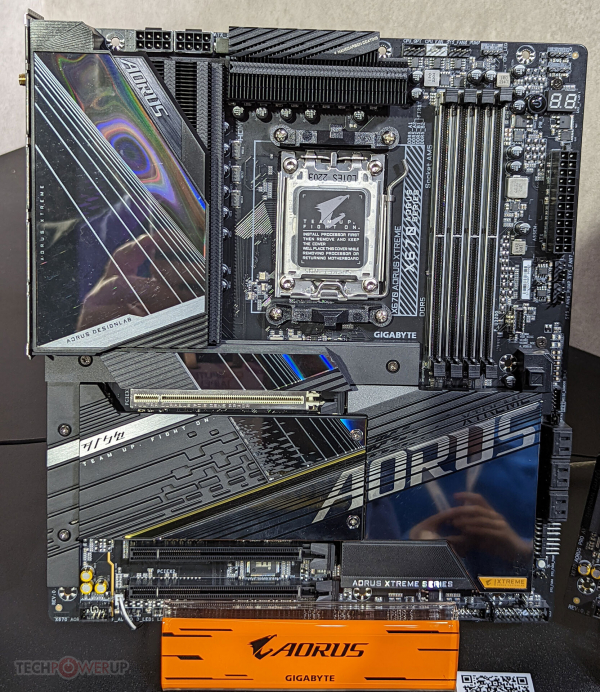 Finally, the X670E Aorus Xtreme , representing the older segment. It uses the same VRM power subsystem as the previous model. The biggest difference is the support for four M.2 PCIe 5.0 slots. However, for this, one PCIe 5.0 x16 slot had to be sacrificed, reducing the number of lanes available for it to eight. 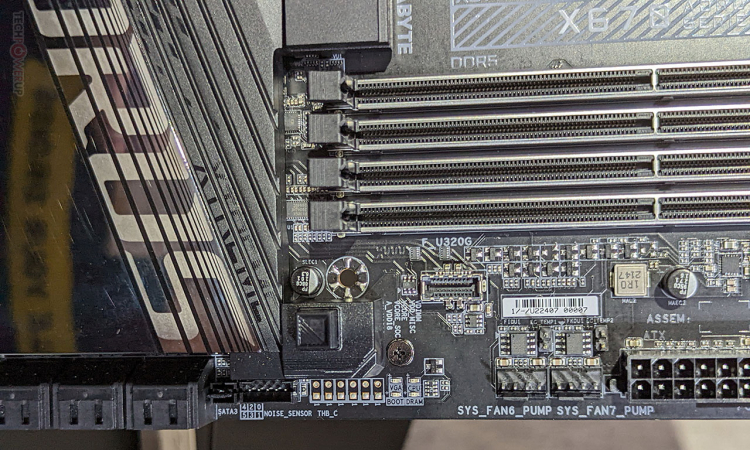 The X670E Aorus Xtreme is the only board on the list that claims 10 Gigabit LAN support. The Marvell AQC113C controller connected via the PCIe 4.0 bus is responsible for its operation. The cost of the X670E Aorus Xtreme will be about $500, which is lower than that of its predecessor based on the AMD X570 chipset.

It should be noted that all listed prices and features of the boards may still change closer to their actual release.