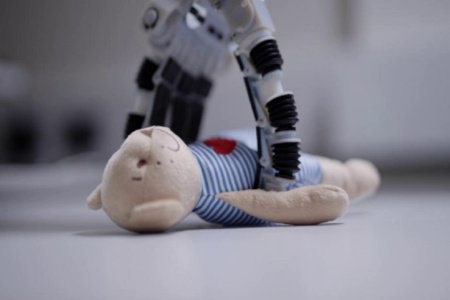 It didn’t work out with electric cars . Therefore, at the International Conference on Robotics and Automation (ICRA) in Philadelphia, Dyson demonstrated a series of prototypes and announced plans to hire hundreds of engineers over the next 5 years to build robots for housework ( vacancies ). The company’s video shows machines with manipulators capable of lifting plates, vacuuming or gently picking up a child’s toy from the floor.

Dyson is in the midst of the biggest engineering recruitment campaign in its history. This year, 2,000 people joined the technology company, of which 50% are engineers, scientists, and programmers. The company has hired 250 robotics engineers in disciplines such as computer vision, machine learning, sensors and mechatronics. And expects to hire another 700 within 5 five years.

Dyson’s main plan is to build the UK’s largest advanced robotics center (Hallavington Airfield) and bring its technology into our homes by the end of the decade.

The new staff will be based at Hullavington Airfield in Wiltshire, at the new London Lab adjacent to the Dyson Robotics Lab at Imperial College, and also in Singapore.

In 2020, Dyson announced plans to invest $3.45 billion in areas such as robotics, new motor technologies and machine learning software by 2025. This year, the company plans to spend 600 about 750 million dollars of this investment.

Tomorrow, July 4, there will be a presentation of new Xiaomi products, where there will be a lot of interesting things. However, the most tidbit is the flagship Xiaomi 12S Ultra with an advanced Leica camera. Despite a series of... Read more

Xiaomi completes preparations for the announcement of the Xiaomi 12S series, and does not forget to pay attention not only to Xiaomi 12S Ultra, but also to Xiaomi 12S Pro, which is noticeably simpler. Today, for example, the Chinese shared... Read more

Recently, rumors about the preparation of a new flagship of the Huawei Mate series have become more frequent. They say different things about the future novelty, including the return of Kirin, but now it’s not about that. Well-known Huawei/Honor leaker... Read more

Tomorrow, July 4, a big Xiaomi presentation will take place, where, in addition to new smartphones, they will also show a new series of Mi Band fitness bracelet – Mi Band 7 Pro. There are not very many details yet,... Read more

The most interesting new series of July 2022

July pleases with a number of good fresh series. Also these days we are waiting for the return of several favorite projects of different genres. We have collected the most interesting novelties of the second month of summer for small... Read more

Second chance: POCO F4 at a promotional price on AliExpress

The POCO F4 went on sale earlier this week, but the AliExpress debut was a bit blurry due to the all-money shipping story . Well, our guys from Discount MT have found an alternative. Now the “king of the balance”... Read more

Physicists will be pleased: ASUS is preparing an innovative cooler for ROG Phone 6

ASUS has revealed yet another ROG Phone 6 feature that allows you to use the magic phrase “world’s first”. This time, the Taiwanese are preparing the world’s first completely wireless cooler. This was made possible thanks to the Peltier element... Read more

OnePlus has an excellent level of support, although it hasn’t been particularly responsive lately. But better late than never, right? The owners of the OnePlus 7T series, who have been waiting for a long time and finally waited for Android... Read more

Most smartphone manufacturers allow leaks, but Motorola is the absolute leader in this matter: we learn about most of its smartphones at least six months before the announcement. Today, Evan Blass continues this tradition by revealing what products the company... Read more