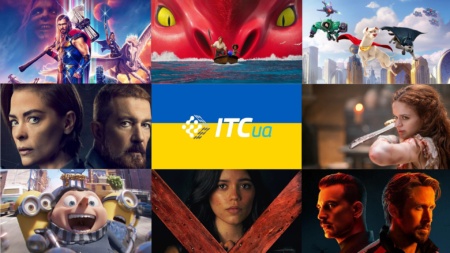 The second month of summer will give Ukrainian viewers several blockbusters, the same number of cartoons, as well as a pack of films of different genres and budgets. We have collected the best films of July, which, in our opinion, you should see.

The action of the new horror film “X” takes place in Texas in 1979. A group of people rent an old house from an elderly couple in order to shoot adult films in it. The owners of the premises are asked not to make noise, but the tenants do not react to this. Then the old people arrange a real nightmare for their guests.

The princess (Joey King) defies the will of the king and rejects a marriage proposal from the insane and cruel Prince Julius (Dominic Cooper). Offended, the villain decides not only to get the girl by force, but also to overthrow the king. But the main obstacle in his path suddenly becomes the princess who rejected him.

The new animated film “Minions: Rise of a Villain” is a continuation of the last “Minions” and a prequel to “Despicable Me”. This is the story of the rise of the villain Gru Felonius and his friendship with the minions.

The hired killer Delilah, nicknamed Banshee (Jamie King), receives a new task. During his execution, she finds out that her client once tried to kill her handler Caleb (Antonio Banderas). Then it turns out that Caleb is alive and they, along with the Banshee, must find and destroy the killer.

A young girl, Macy, sneaks aboard legendary monster hunter Jacob Holland’s ship. Together with his team, she goes on a dangerous journey.

A few months after the world premiere in Ukraine, a new film is released with Sandra Bullock, Channing Tatum and a couple of movie stars. She plays writer Loretta Sage, who has lost her inspiration, and he plays a goofy, beautiful model named Alan. The guy is in love with the writer and when she is stolen by the insane billionaire Abigail Fairfax (Daniel Radcliffe), he hires ex-Special Forces Jack Trainer (Brad Pete) to save her.

This is a story about a teddy bear named Bramble, an alien named Avi and an enemy high-tech army that has attacked the alien’s trail and now threatens to destroy the Earth.

Thor (Chris Hemsworth) wants to go on vacation, but is prevented by a Godslayer named Gorr (Christian Bale). This alien villain wants to finish off the god of thunder. Thor enlists the help of Korg (Taika Waititi), Valkyrie and his ex-girlfriend Jane Foster (Natalie Portman).

The Gray Man is a new action movie by the Russo brothers starring Anna de Armas, Chris Evans and Ryan Gosling. The film is based on the novel of the same name by Mark Greaney and tells the story of former CIA agent Cort Gentry. Now he is a hired killer who is hunted by former colleague Lloyd Hansen.

Superman has a favorite pet, Superdog Krypto. Master and pet fight together and make Metropolis better. But suddenly the villains kidnap Superman himself, and then all the members of the Justice League. In order to save them Superdog Crypto collect their team.