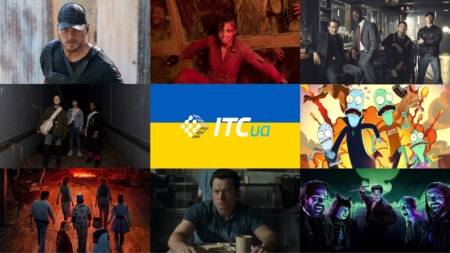 July pleases with a number of good fresh series. Also these days we are waiting for the return of several favorite projects of different genres. We have collected the most interesting novelties of the second month of summer for small screens. If we suddenly missed something, then be sure to write the names of the TV show in the comments.

The new Amazon Prime Video series became available on July 1st. It is a TV adaptation of Jack Carr’s novel of the same name. Starring Chris Pratt and directed by Antoine Fuqua (Training Day, The Equalizer). Marine James Reece and his platoon were ambushed during a covert sting operation. Only the main character survived, so upon returning home, he begins his own investigation of what happened and learns about a major conspiracy.

A fresh crime series is coming to Apple TV+ starring Taron Egerton (Kingsman, Rocketman). He plays sportsman and son of police officer James Keane, who ends up in jail. After a while, the guy is offered to leave earlier, but for this you need to fulfill a number of dangerous conditions.

Netflix is releasing a new series based on Capcom’s Resident Evil game franchise. The plot of the project is divided into two time periods. The first is about teenage sisters Jade and Billy Wesker, who move with their father to New Raccoon City. The second is about the terrible world of the future, where the vast majority of the population is infected with a zombie virus.

Amazon’s streaming service releases an unusual adaptation of Brian K. Vaughan’s comics this month. The story takes place in 1988, just after Halloween. Four newspaper delivery girls find themselves at the center of a war between two groups of time travelers.

The upcoming teen drama and mystery television series will be the fourth installment in the Pretty Little Liars franchise. The TV show follows a group of high school girls from the small town of Millwood. The girls are blackmailed by an unknown person. He wants them to pay for the sins of their parents twenty years ago.

On the first day of July, the second part of the fourth season of the already, perhaps, cult youth series “Mysterious Events” (“Very Strange Things”) was released on Netflix. The creators of the project are the Duffer brothers. The last two episodes are almost four hours long (the eighth episode will last 1 hour and 25 minutes, the ninth – almost 2.5 hours).

“The Other Side of the Earth” / Solar Opposites

Continuation of the funny adventures of a family of aliens who escaped from their own destroyed world to Earth, in the USA. The animated series is the new brainchild of Justin Roiland and Mike McMahanom, the creators of Rick and Morty.

City on a Hill

On the last day of July, the third season of the police drama City on a Hill starts, starring Kevin Bacon and Aldis Hodge. The series reveals the history of Boston in the 1990s. A black Brooklyn prosecutor and an FBI veteran join forces to take on a gang of cash-in-car robberies.

The third season of the animated series “Harley Quinn” continues the story of the adventures of the famous criminal after her breakup with the Joker. Harley’s faithful assistant was Poison Ivy. The main character herself is voiced by Kaley Cuoco from The Big Bang Theory.