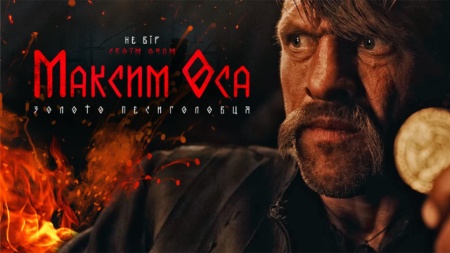 The first full-fledged trailer of the sensational “ long-term” Ukrainian cinema “Maxim Osa and Pesigolovtsa’s gold” has been released – the first adaptation of a comic book in the history of Ukrainian cinema that combines the genres of detective and fantasy. The film, authored by Miroslav Latik and Andrey Babik, is based on the comic book of the same name by Igor Baranko, which was first published in two volumes in 2008-2009.

The action of the Cossack adventure thriller takes place in the 30-40s of the 17th century, 10 years before the Khmelnytsky uprising. According to the plot, the Polish king pays tribute to the Cossacks in order to prevent the uprising, but on the way to the Nachman tavern, the gold disappears, and only one of the detachment of five Sich Cossacks managed to get to the tavern. Maxim Osa undertakes to find out the mysterious circumstances of the death of the rest and find the lost treasures – the cornet of the Korsun regiment will have to unravel the “snake kublo” and face the mystical Doghead.

The main character – a charismatic, rude and sharp-tongued Cossack – was played in the film adaptation by the actor of the Kiev Academic Drama Theater on Podil Vasily Kukharsky. Director Miroslav Latik said that in his work he made an attempt to rethink the “bookish” image of the Ukrainian Cossack and get rid of the stigma of “sharovary”.

“ I relied on the comic as a general mood, because even at the level of costumes we changed the style. I wanted more rudeness, less “ sharovarny “ Cossacks, desecrated by the Soviet government, which I, as a phenomenon, do not like.

I wanted to “ reshape “ it . The events take place 10 years before the Khmelnytsky uprising, respectively, there is such a Cossack, which we, modern Ukrainians, are better known and understandable. During the framing, they relied not on Baranko’s comics , but on the principle of comic book angles of frames as such, in the general sense of comic book adaptations.

They worked on the film for 10 years – the intention to adapt Igor Baranko’s graphic novel for the big screen became known back in 2012. Since then, the film has gone through a real production hell – the director, actors and crew have changed several times, and the script has been rewritten right during the filming. The shooting of the film lasted 1.5 years – with a break for quarantine caused by the COVID-19 pandemic. Outdoor shots from the Kyiv region are supplemented by interior shots in the Rivne and Zhytomyr regions. And now the film has reached the finish line – the Ukrainian film distribution “Maxim the Osa and the Gold of Pesigolovtsya” will be released on October 13 to coincide with the Day of the Ukrainian Cossacks.

The film was created by the Film Studio for Children and Youth Films. O.A. Khanzhonkov with the support of the State Film Agency of Ukraine, and Kinomaniya and FILM.UA Distribution are responsible for distribution in Ukraine.