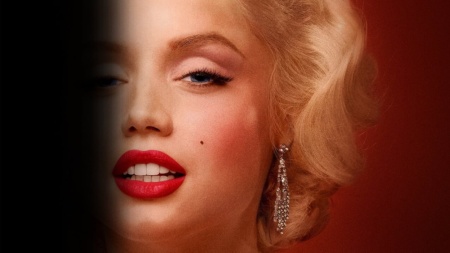 On September 8 at the Venice Film Festival, and on the 28th already on Netflix, another biopic about the legendary Marilyn Monroe was released. Andrew Dominic (The How the Cowardly Robert Redford Killed Jesse James, The Casino Heist) undertook to write the script for this tape, as well as direct it, and the main role was played by the Cuban-Spanish beauty Ana de Armas. Read the review below to find out why this movie is worth watching.

“Blonde” is the second film adaptation of the novel of the same name by Joyce Carol Oates, which tells about the unbearably difficult and tragic fate of the titular heroine. But, following the example of a literary source, Dominic in his work does not at all aim to accurately document Monroe’s life story, and in general introduces the viewer closer to Norma Jean Baker – always a small, abandoned and lonely girl, only pretending to be a charming, happy and very successful woman , which became a real sex symbol of the 50s and the embodiment of the American dream, which for many has remained something unattainable. First of all, this is a story about Norma’s inner experiences, her own dreams and hopes, which were never destined to come true. 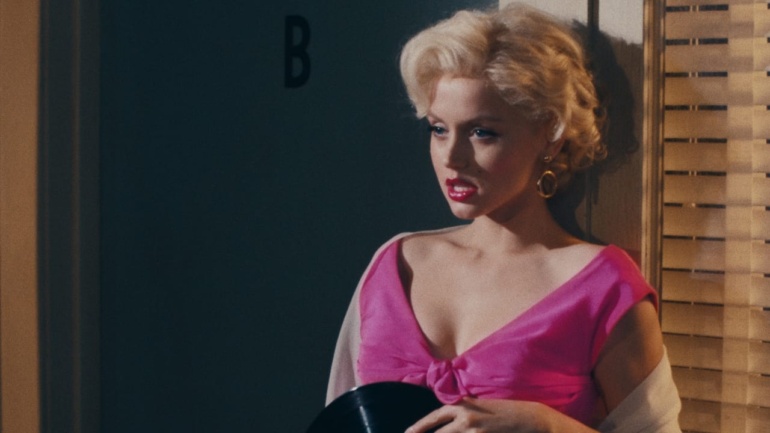 This is a story about the dirty rules of the film industry in the middle of the last century, despite the fact that this era in Hollywood is still called golden. This is a story about the impossibility of Marilyn to build exactly the career that she wanted, because the exploitative image of the stupid blonde created by the studio became the hallmark of the actress and it was almost impossible to get rid of it. In addition, the audience of that time, especially the male one, only demanded from Monroe just such performances as frivolous simpletons – from her point of view, humiliating and idiotic, as if it was not she who embodied them so well on the screen. When the girl began to talk about Dostoevsky or Chekhov, the studio bosses had no choice but to laugh in response and appreciate the seductive figure of the beauty.

Therefore, looking at the main character from the side from which she is shown in the “Blonde”, comes a steady understanding that no glory could replace Norma for what she really wanted, namely, simple human happiness. To be understood, loved and respected. So that the father would caress and at least once in his life say how much he loves his little girl. To make her mother happy for her success. But this was an unattainable dream, given various factors that for the most part did not even depend on her. Could the fate of such a broken and vulnerable woman have turned out otherwise than tragically? The question is, of course, rhetorical.

In “Blonde” Dominic, although he talks about important events in the life of a famous character, but his work can only seem like a sprawling biopic and infinitely far from modern traditional Hollywood biopics. The latter can boast of big budgets and bright scenes, surprise with incredible acting transformations or, if necessary, wonderful musical numbers, but due to lack of time they are not able to fully reveal the characters’ characters and are forced to develop the narrative in the rhythm of “galloping across Europe” (one of the last such projects was “Elvis” Baz Luhrmann). The “Blonde” is absolutely not inherent in such problems, because she goes in a completely different way.

This movie is radical and deep, and therefore more daring. In its pessimistic mood, it is closer to the experimentation of Gus Van Sant’s The Last Days, which told about the end of the path of Kurt Cobain. Initially, this is an attempt to get into Marilyn’s head, and not under her skirt, as the insane, chanting her name crowd, which consisted mainly of lustful men with deformed Ghostface-like mouths, craved. This is a bizarre journey into endless suffering, as if the creators had no other goal than to expose the soul (and a little body) of the unfortunate star, meticulously demonstrating all the hardships in her life as if under a microscope. Meanwhile, this is also, to some extent, a manipulative movie, because just as a verbose primary source turns out to be difficult reading, so here this surprisingly depressing narrative literally screams that the main character deserves sincere compassion like no one else. But what you absolutely can not worry about is the reincarnation performed by de Armas: she not only visually resembles Marilyn (sometimes even strikingly similar), but also perfectly manifests herself as a serious dramatic actress – ironically, this is exactly the kind of role, to which Monroe herself so strongly aspired to. It’s a really powerful acting challenge, and Ana certainly was able to handle it. And the creators do not refuse to experiment with the image: it constantly changes the aspect ratio and jumps from color to monochrome and vice versa. At the same time, Chasey Irwin’s camera, as if glued, follows the main character everywhere, catches many close-ups of her face so that the viewer can better feel the emotional state of the character, and shoots, as it were, “from the shoulder” during dynamic moments when, say, Marilyn is running at full speed along the corridor. Some scenes are subject to deliberate visual distortion, such as scenes where the picture is out of focus. All this works for one or another effect, or emotion, which the authors are trying to evoke.

Moments look interesting when something happens in the frame, and the viewer knows for sure what the heroine feels at that moment, and then the scenes take on a completely different meaning or context. Sometimes Marilyn’s thoughts are voiced directly, as was the case in the scene where she is forced to give a blowjob to John F. Kennedy, and such soft pornographic content, also involving the President of the United States and using an extra close-up of this process, can hardly be expected from a traditional mainstream biopic . Nevertheless, there is no proof of such a case, because, as in the work of Oates, some here are true and others are fiction, but in the end it does not matter at all what exactly.

The great Hitchcock once said that a film is a life from which the stains of boredom have been removed, and thanks to the editing techniques, the story in the tape really looks like everything that is not worth the audience’s attention has been removed from it. This is an unconventional biopic, in which a lot of contradictions collided, such as success and failure, fame and oblivion, the Hollywood glamor of the 50s and the disgusting internal kitchen of the then film industry, and also the authenticity of one’s self and the artificiality of a fictional alter ego, albeit terribly successful. All these and many other contradictions best characterize the image and life of Marilyn herself. 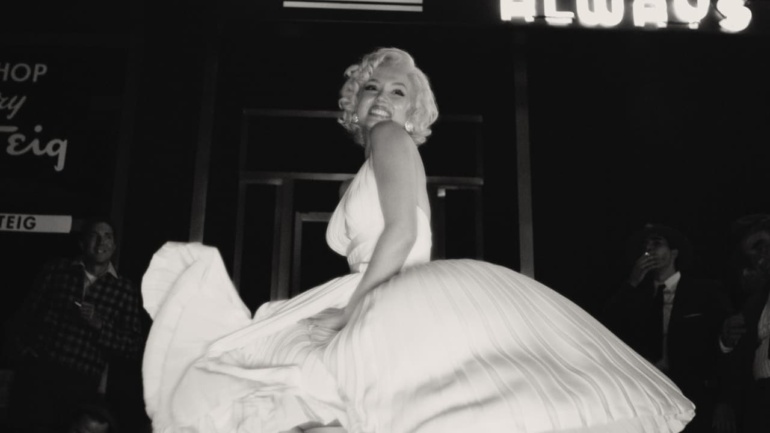 As in the aforementioned “Last Days”, in “Blonde” the soul of the lifeless heroine will leave the physical shell, and then smile coquettishly at the viewer, as only she can. However, it is unlikely that you will be able to smile in response to the sadness that inspires the film.

Pros: a deep story that can hook, great performance by Ana de Armas, an unconventional approach to the genre, powerful musical accompaniment

Cons: the optionality of some scenes and, as a result, a slight delay

Conclusion: In “Blonde” the director does not intend to compromise with the viewer (although, perhaps, he still had to cut out the most explicit scenes), and de Armas gives such a confident work that it is absolutely impossible to remain indifferent to the suffering of her heroine