Skip to content
Home Technology What to play in October. Game releases of the month 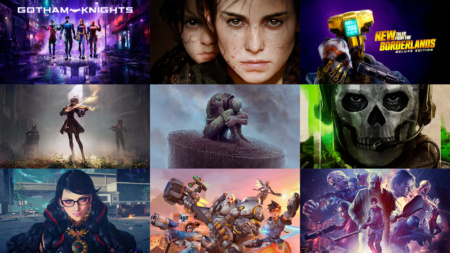 The previous months were reserved for new releases, but October is preparing a real surge of interesting releases. There will be an opportunity to play something new throughout the month, but the loudest releases are scheduled for the end of October.

The Overwatch sequel has raised doubts among fans from the first second of the announcement. Players didn’t see the need for a new game in the series and saw Overwatch 2 only as an attempt to sell the same game a second time with minimal story content added to it. During the Summer Game Fest, Blizzard announced that the game is moving to an F2P model, and the Season Pass will be introduced instead of loot boxes. Overwatch 2 will absorb the first part, the new season will begin with the release of the game on October 04, and the promised story content will be released later and you will have to pay for it.

Already a triquel of kart racing with Nickelodeon cartoon characters. There are 40 characters in total, including SpongeBob, Garfield, Teenage Mutant Ninja Turtles, Arnold, James Isaac Neutron and more. The previous part received discreet reviews from the press, but perhaps in the new game, the developers have corrected the shortcomings of their predecessor.

A real long-term construction inspired by the works of Zdzisław Beksiński and Hans Giger is finally crawling to release. Developers reassure the players and somewhat reduce the degree of expectations, operating on the fact that they are a small studio and are not able to compete with large companies. And even if the gameplay turns out to be mediocre (and the trailers hint at this), we still expect an interesting story, and if it even comes close to SOMA levels, it will already be a victory.

Amission and Hugo’s journey continues. The developers have worked on the mistakes of the predecessor, the game has become bigger, more beautiful, with new abilities, locations and adult main characters.

We are sure that A Plague Tale: Requiem will turn out to be a good game, but the position of Focus Entertainment is confusing. The French publisher not only announced the Russian localization of the game with apologies, but also announced a collaboration with the Russian studio Mundfish, the developers of Atomic Heart. And all this is happening against the backdrop of a total refusal of other developers and publishers to cooperate with the Russians.

Ghostbusters: Spirits Unleashed is a multiplayer game set in the Ghostbusters universe. For a team of hunters, this is an FPS game, ghosts will have to be controlled from a third person. The task of the hunters is clear, but the ghosts must cause havoc and frighten everything that can be frightened. In the absence of a sufficient number of players, AI can take control of the ghost. Ernie Gadson and Dan Ackroyd also reprise their roles.

Over the past year, the developers have already shown so much gameplay and plot of the game that it seems that they do not want us to play their game ourselves. According to the plot, after the death of Batman (just exactly death), the Red Hood, Batwing, Robin and Batgirl are investigating the tragedy. You can play for each of the four heroes, they all differ in gameplay. Gotham Knights does not have co-op, but you can switch between characters.

New Tales from the Borderlands

Continuation of the spin-off Borderlands. The first part was developed by Telltale Games, the sequels are made by almost the same people only already within the walls of Gearbox Studio Quebec. New Borderlands stories will focus on new characters, but we’ll also meet a few familiar faces.

In a dystopian future, humanity has discovered dark secrets. You will have to survive and solve puzzles in public institutions of both the earthly and extraterrestrial governments.

The multiplayer mode that was supposed to be part of the Resident Evil Village bundle and celebrating the 25th anniversary of the series is finally getting to the players. After cool fan reviews, the game was postponed several times, but whether the developers managed to make the gameplay interesting will be known at the end of the month.

Continuation of the restart of the Modern Warfare sub-series. During a recent open test on Steam alone, peak online reached over 100,000 concurrent players. The series is solidly on its feet and only gaining momentum, and Sony seems rightly worried about the potential exclusivity of the series for the Microsoft platform after the closing of the agreement to buy Activision.

Bayonetta is back! There are few slashers, and therefore each is worth its weight in gold. It’s even a pity that the game is exclusive to the Nintendo console. On the other hand, if it wasn’t for the Japanese publisher, the sequel probably wouldn’t have happened at all. Of the features of the third part, it is worth highlighting the “chastity” mode – Naive Angel Mode, when turned on, Bayonetta will not be exposed when using her abilities.

NieR:Automata The End of YoRHa Edition

The sequel to the spin-off of the Drakengard series is primarily known for the heroines 2B and A2, and if not an indifferent gamer decides to play and not just watch, then he will be surprised to find a fascinating story for himself in the world after people.

Six years after the original release and several hundred patches, the true gaming phenomenon is making its way to the Nintendo console.

The title series of the PlayStation is slowly creeping up on the owners of gaming PCs. Uncharted 4: A Thief’s End and Uncharted: The Lost Legacy are bundled with new features inherent in the PC versions: tightened graphics, support for widescreen monitors and DualSense, and, of course, advanced graphics settings.