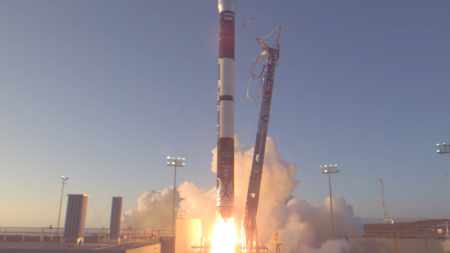 Firefly called the demonstration mission “Alpha Flight 2: To The Black.” As the name suggests, this was the second orbital launch for the rocket – on a previous flight in September 2021, one of the rocket’s four first-stage Reaver engines shut down prematurely, causing the mission to fail.

Here’s a little replay teaser from tonight’s outstanding @Firefly_Space ‘s first successful launch of their Alpha rocket! I can’t wait for @considercosmos to post the high quality video AND audio along with this, it’s going to be something special for sure!!! #ToTheBlack pic.twitter.com/L4LbT8I7Bd

Alpha launched several mini-satellites into Earth orbit. All three payloads were to begin deployment just under an hour after launch. The rocket’s upper stage was not in contact with the ground station during the process – so the confirmation of the deployment came a little later, and not in real time.

🚀3 payloads have been deployed successfully, and customers have confirmed acquisition of signal.

One of the satellites, called Serenity, is owned by the non-profit organization Teachers in Space. It was designed specifically to collect various data during today’s flight – they will be transferred directly to the customer.

Also today, the TechEdSat-15 (TES-15) satellite, which is owned by NASA and San Jose State University in California, entered orbit. The TES-15 is equipped with an “exobrake” that will help the satellite “de-orbit more smoothly” after the job is done.

“The exobrake will activate after the CubeSat is ejected from the deorbit dispenser,” Firefly wrote in the mission description.

The company added that the TES-15 is also undergoing an experiment aimed at optimizing data transfer.

The third payload is a PicoBus from the non-profit organization Libre Space, which in turn carries 5 tiny picosats. Among them are the Genesis-L and Genesis-N from AMSAT (from the Amateur Radio Satellite Corporation) in Spain. According to Firefly, the pair should fix the pulse-plasma drive system to propel the spacecraft, “creating a legacy for future missions.”

The PicoBus also carries Libre Space’s Qubik-1 and Qubik-2, which will conduct communication experiments, and FossaSat-1B. The latest mini-satellite from the Spanish company Fossa Systems will test communications and remote sensing technologies. It is also equipped with a low-resolution earth camera.

The disposable Alpha rocket is designed to deliver small satellites into orbit. According to Firefly, the rocket will be able to carry up to 1,170 kg of payload to low Earth orbit at a cost of $15 million per launch. Firefly plans Alpha to become a serious competitor in the small satellite launch industry, which includes players such as Rocket Lab and Virgin Orbit (both offer dedicated small satellite flights) and SpaceX with the more powerful Falcon 9 rocket.

Today’s test flight was originally scheduled for September 11, but Firefly canceled the attempt due to an unexpected drop in helium pressure. Unfavorable weather forecasts rescheduled the mission to 30 September, although this one was also aborted just after the engine fired, delaying the launch by another day.

Firefly Aerospace is a privately held aerospace company created from Firefly Space Systems. It was bought and relaunched in 2017 by the Ukrainian entrepreneur and founder of Noosphere Ventures Max Polyakov. In early 2022, under pressure from the US government, he had to sell his stake in the rocket company Firefly Aerospace for one dollar . He had a 58% stake in the company. After the Russian attack on Ukraine, Polyakov said he was ready to invest in military and intelligence technologies aimed at strengthening the security of our country.

Polyakov wrote about the Alpha flight on Facebook, noting that the colors of the Ukrainian flag were visible on the launched rocket.

“This is a message to all those who can read between the lines. Glory to Ukraine!” Polyakov added.

You can watch the broadcast of the rocket launch in the video below:

Firefly also published a video with a cut of the key moments of Saturday’s launch.