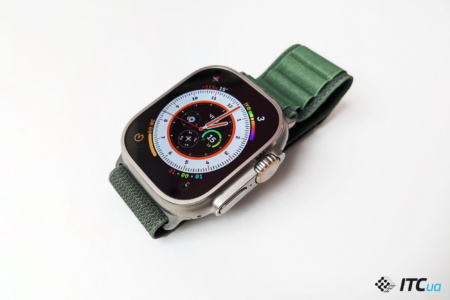 Let’s take a closer look at the new features of the watch when used in everyday life, and also compare them with the new generation of Apple Watch Series 8.

The watch comes in a different from the usual elongated Apple Watch boxes. In the new model, the packaging is not so elongated, but still rectangular. Inside is a brochure and two boxes, one of which contains: 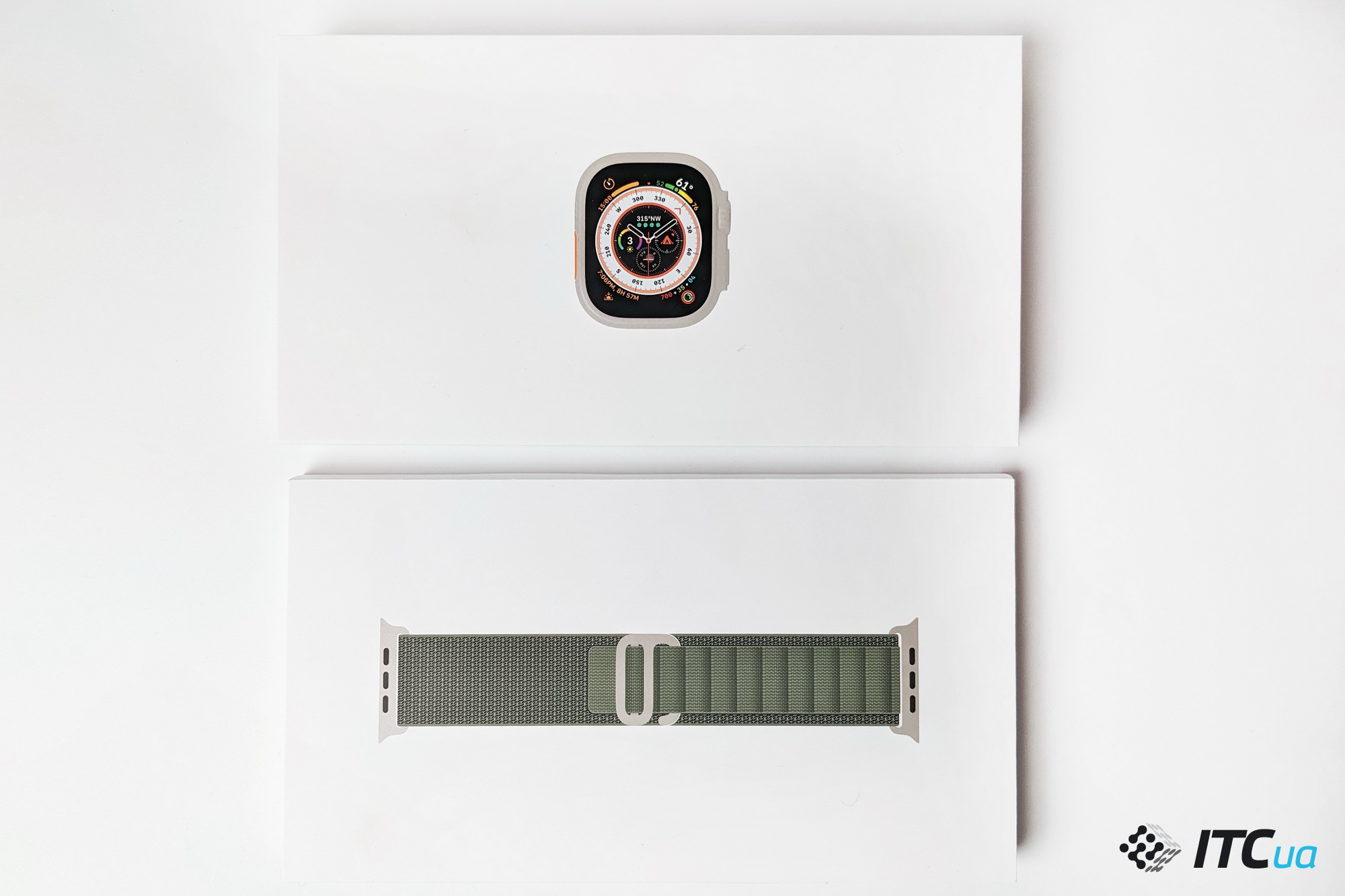 The second box contains one of three new straps, in my case the Green Alpine Loop. New straps are selected by size at the order stage and are not equipped with additional straps. 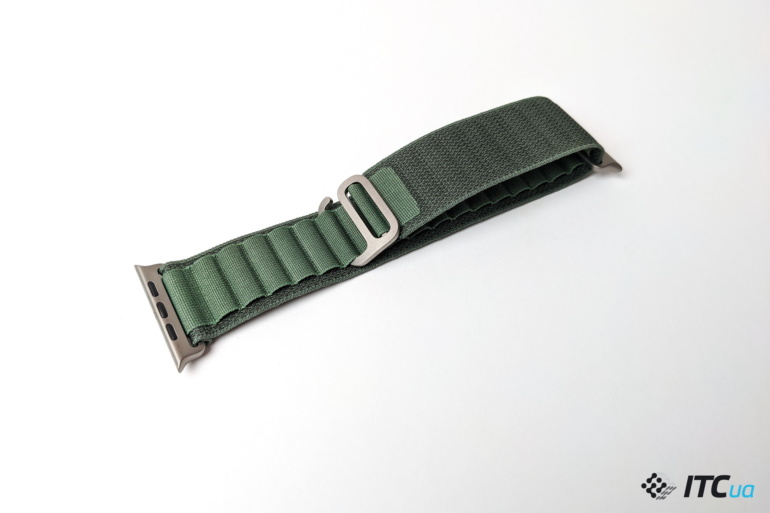 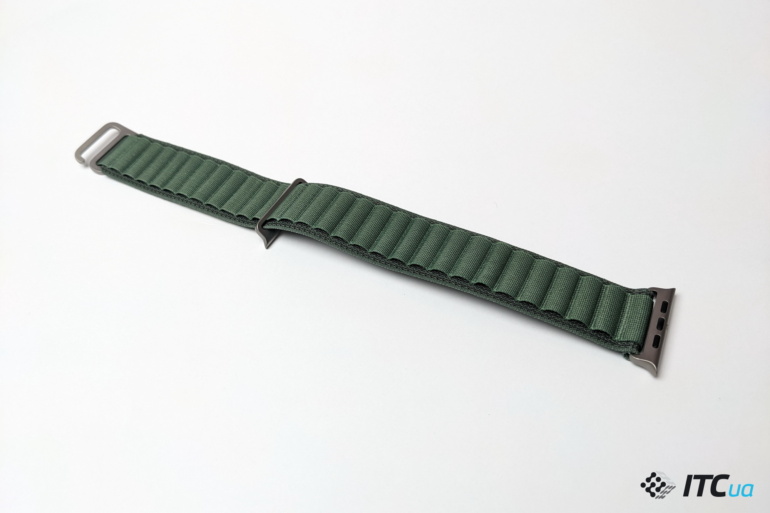 The Apple Watch Ultra looks edgy, stylish, and aggressive—something Apple users have been missing out on to make their watch stand out more and look less streamlined. The titanium case demonstrates a high level of reliability and looks impressive. The device is certified IP6X, MIL-STD 810H and EN13319.

The overall shape of the case remains recognizable, but features such as additional speakers, an additional orange-colored action button (not the best solution for some users), and a protruding part of the case that houses the Digital Crown and the action button have been added. The glass is now on a platform protruding from the case, while being completely flat, which fundamentally distinguishes it from the classic Apple Watch. This is not to say that this is not convenient in terms of ergonomics, but you will have to get used to it if you have previously used a smart watch with a streamlined display. 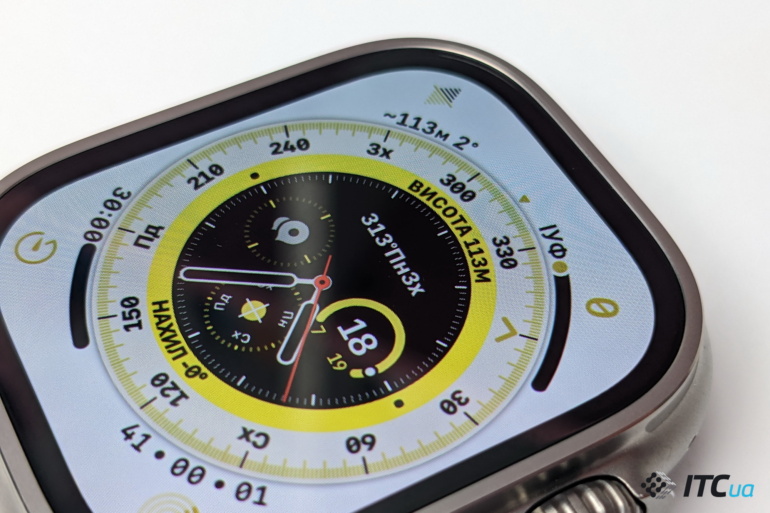 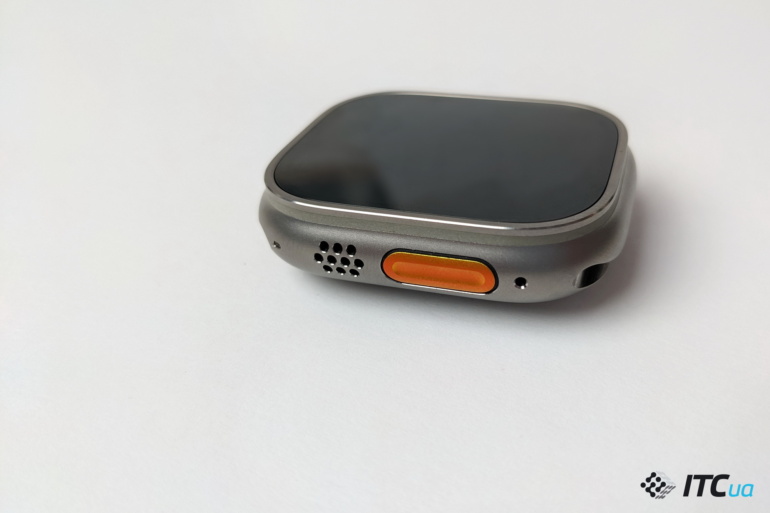 The crown has also become more aggressive and now the notches on it are significantly deeper, which should make it easier to navigate the watch in adverse conditions or with gloves. 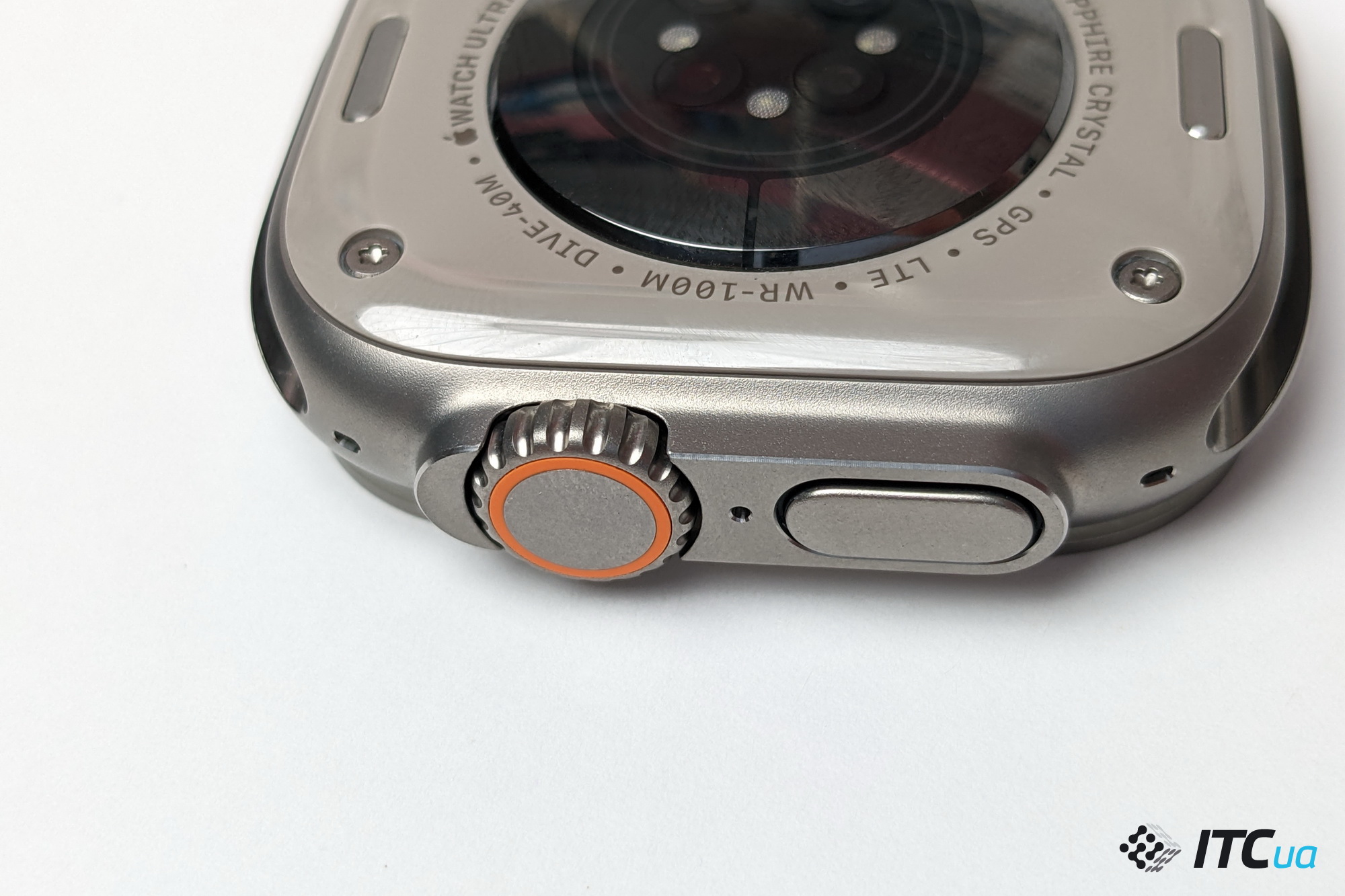 On the underside there are already familiar sensors covered with sapphire glass, but now you can see 4 screws on the bottom cover, which distinguishes the watch from the usual smooth covers of previous generations, and the cover itself is made in a light color. 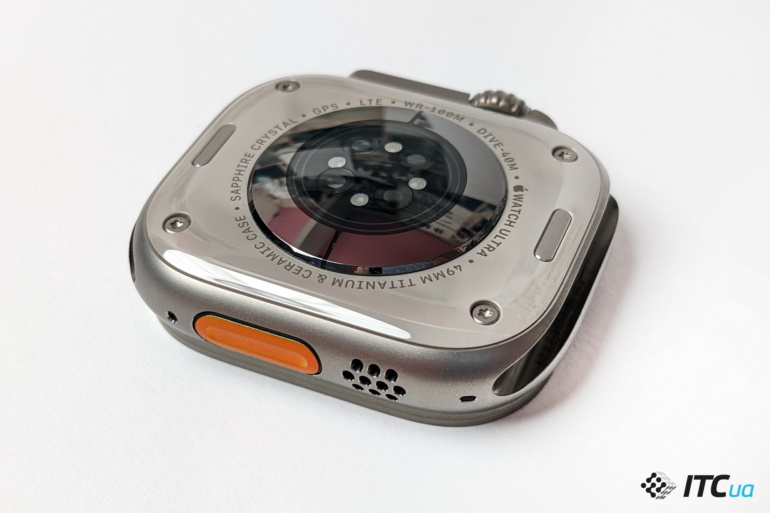 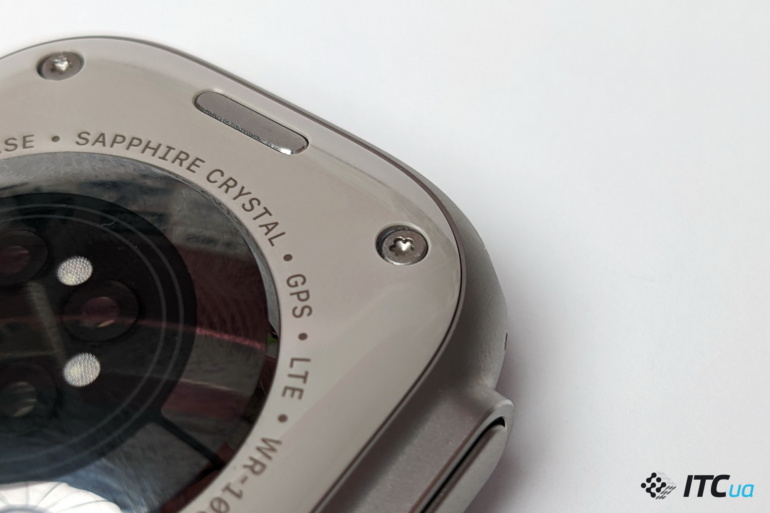 The watch is significantly larger and heavier than the classic Apple Watch. In direct comparison, the difference does not seem so significant, but in practice, when using the Apple Watch Ultra and Series 8 alternately (a review of which can be read at the link ), regular Watches are still more comfortable to wear. The Watch Series 8 does not cling to the sleeves of clothes and does not feel at all on the wrist, while the Watch Ultra is much less comfortable in everyday use. But this is only if you do not compare them with the same Garmin or Samsung, the older models of which are approximately the size of the new Apple Watch. 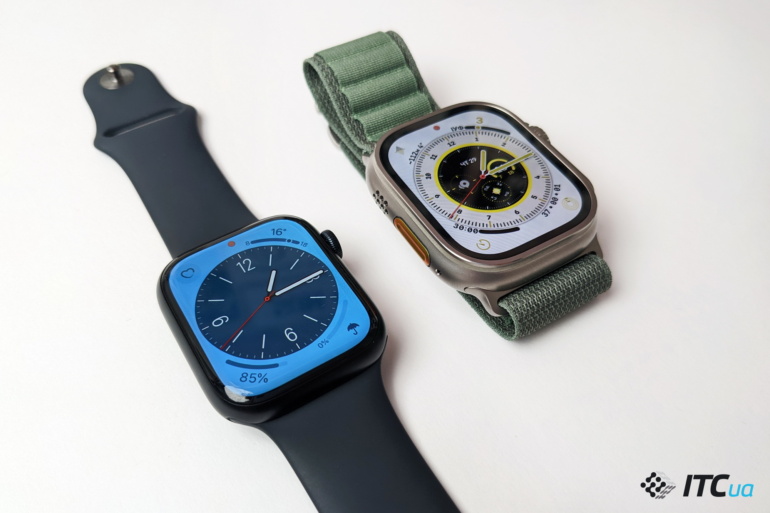 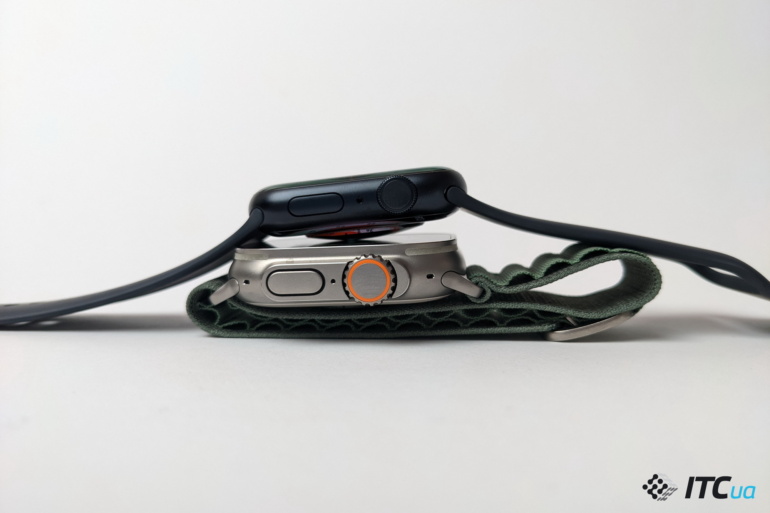 New straps deserve special attention. The review kit contains an Alpine Loop that fastens with a hook. On first use, it seems hard to come up with a less convenient way to fasten the strap, and at first you think that Apple has gone somewhere wrong in trying to please athletes. But once you get used to the new clasp, you realize that this is actually one of the most secure and comfortable ways to wear Watches. 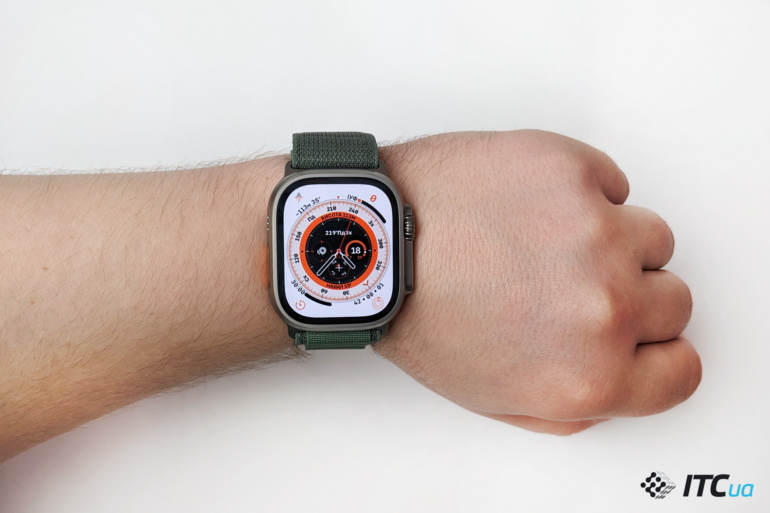 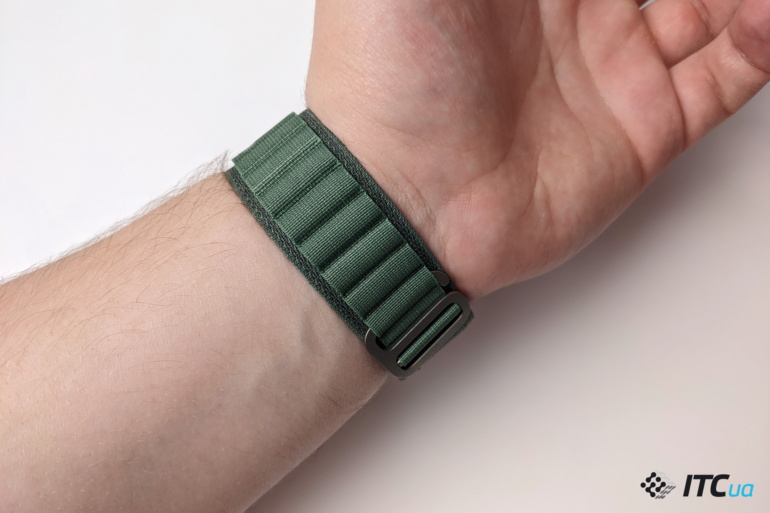 Unfortunately, I didn’t get to try out the other two straps, but the Alpine Loop really inspires confidence that the watch will stay on your wrist, no matter what you do. Plus, the strap is breathable and the skin under it does not sweat, which is fundamentally different from silicone straps for Apple Watch. With the new Watches, you can also use old straps if for some reason the sports options from Ultra do not suit you.

The new display is larger and brighter than the regular Apple Watch, now boasting a peak brightness of 2,000 nits. OLED LTPO 49 mm screen with Always-On contrast and bright, the picture is rich and easy to read. The flat display is flush with the case and is covered with a shock-resistant sapphire crystal. 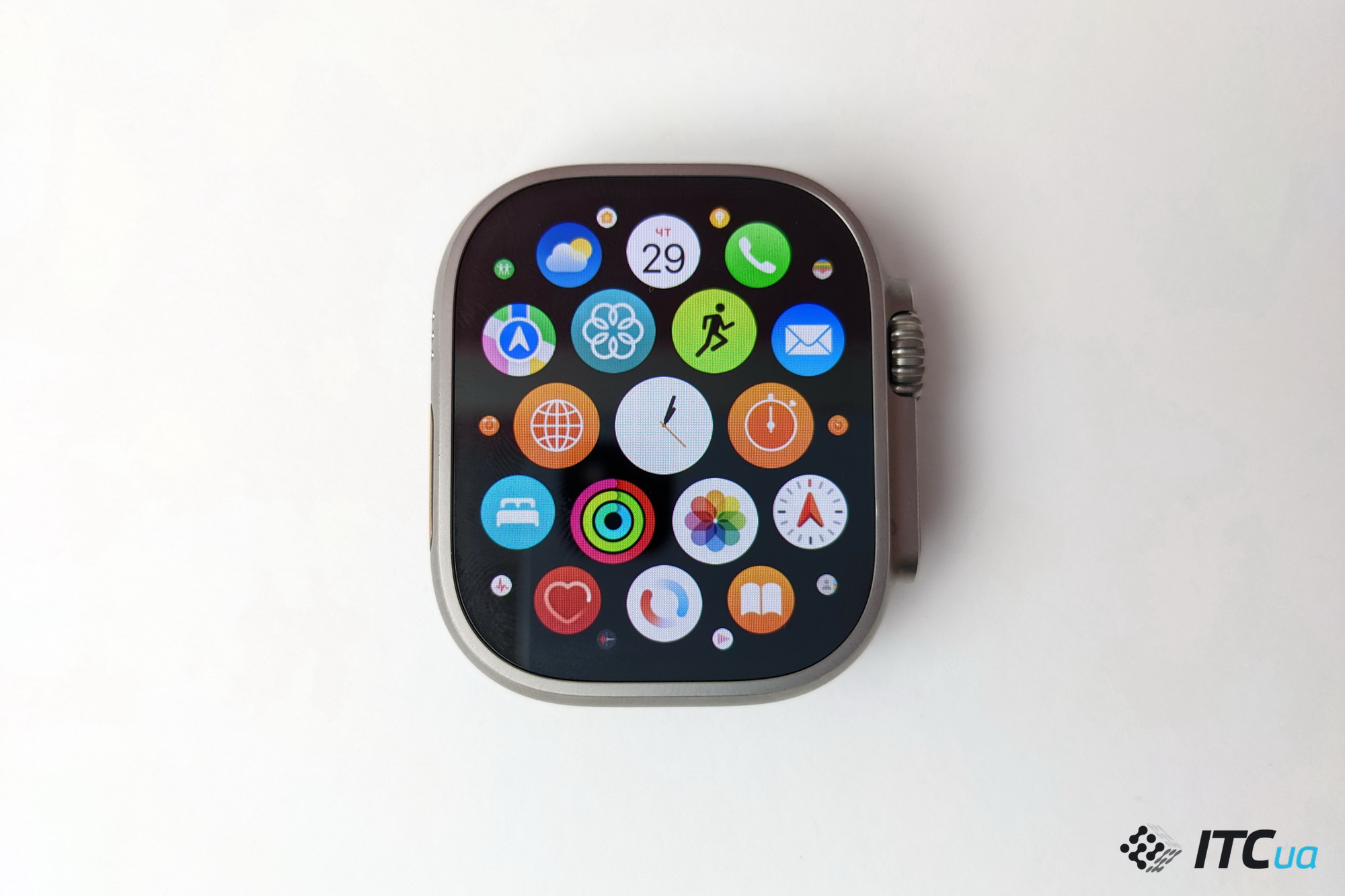 In the event that the user still does not have enough contrast, Apple has added an optional maximum contrast – while using the new dials, it is enough to turn the crown so that the watch switches to red mode, also known as the Wayfinder dial. The image is replaced by bright red on a black background, which allows you to view information in almost any conditions.

Inside the watch is a 64-bit dual-core S8 processor and 32 GB of storage. Apple Watch Ultra, in addition to additional functions, can do everything the same as Apple Watch Series 8, namely: measure heart rate, ECG, blood oxygen levels, track sleep and measure the user’s position with subsequent notifications of an accident or fall, and also monitor the phases of the menstrual cycle.

An additional speaker is designed to improve the sound during a call on the clock even in very strong winds, which in practice really turned out to be the case. On the street in windy weather, it is much more comfortable to talk through the Apple Watch Ultra than on the regular Watch 8. The speakers also provide an additional useful option – a siren that turns on through the menu or by pressing the orange action button, giving out a squeak with a power of 86 dB. This is enough to attract attention even when you are in close proximity to a busy city highway, and outside the metropolis, such a sound will be heard for several hundred meters. 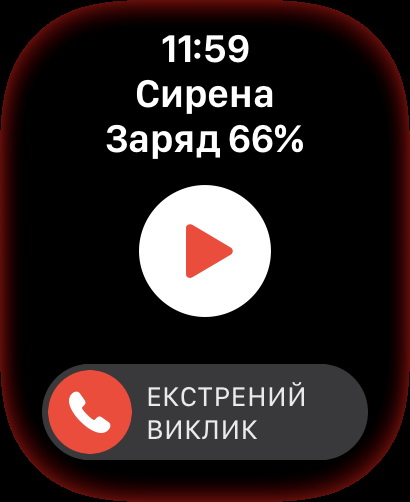 Also, a new depth sensor has been added to the watch, which allows you to measure the depth of the dive and the temperature of the water in real time.

The interface does not differ from the regular Apple Watch in any way, except for special dials and applications for new sensors (depth measurement and siren), so it’s still the same familiar WatchOS, but with new options. 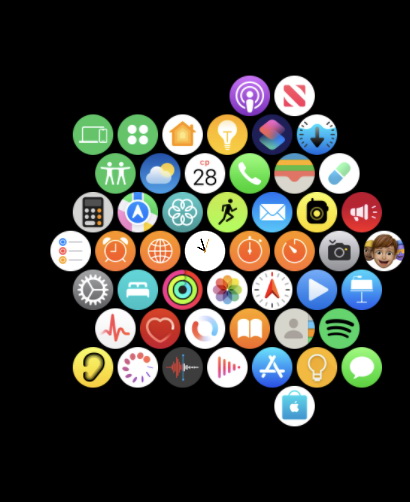 The watch faces are very informative and flexible, but the interface is too busy for everyday life, so ordinary users are likely to replace them with something less informative.

The compass and terrain orientation are positioned as one of the most elaborate and important features of the new Apple Watch, but for some reason it refused to work during the first day. When compared with the Apple Watch Series 8 compass, everything worked identically, but with the difference that on regular Watches the compass worked from the box, and on Watch Ultra only every other day. Perhaps the matter is in a longer calibration, but it looks more like some kind of software flaw on the part of the manufacturer. 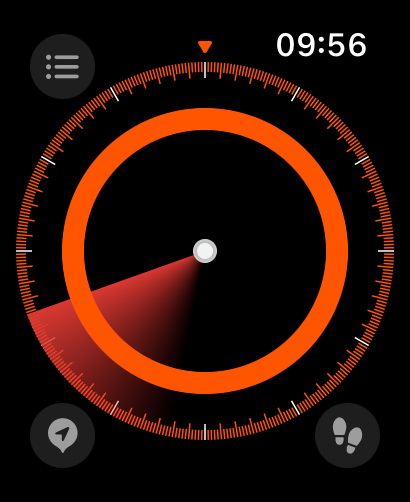 You can assign one of the following actions to an additional button:

Apple Watch Ultra can last up to 36 hours on a single charge and up to 60 hours in power saving mode. If the battery was not such a critical parameter for consumer Watch small models, then in the case of watches designed for extreme sports, and therefore for a long stay away from electricity, this parameter is much more significant. A day and a half of work on a single charge is very little if you plan to go hiking in the mountains, since it is unlikely that there will be an opportunity to constantly monitor the battery of a smart watch. Yes, and 60 hours of work in power saving mode are legal crutches with which brands are trying to justify their devices. Cutting down the capabilities of the device is not a universal solution, since gadgets of this type are purchased to solve problems that the user has, and not think about how to save the battery.

In my usage scenario, the watch was discharged by an average of 40-45% per day, so that the next day it still had a little more than half the charge, which is quite consistent with the declared 36 hours of operation on a single charge.

The closest competitors in terms of functionality and cost are Garmin, among which it is worth noting: Garmin Tactix 7 Pro Edition Solar Powered Tactical GPS Watch for UAH 62,400 , Garmin Fenix 7X Sapphire Solar Carbon Gray DLC Titanium for UAH 41,000 and Garmin Enduro 2 for UAH 50,000 UAH _

Cons: price and ergonomics of the case, autonomy

Conclusion: Apple Watch Ultra is a great gadget that now covers not only all the needs of ordinary users, but also professional athletes and fans of extreme sports. Apple Watch Ultra is still limited by a small battery, which under the expected operating conditions can become critical, especially when compared with competitors. But this is primarily a smart watch from Apple, so future buyers will first consider it as an addition to their iPhone and only then compare its features with competitors; what the manufacturer was striving for, limiting the possibility of using the Apple Watch with Android smartphones. The watches are very expensive and for the vast majority of use cases in everyday life, the capabilities of a simple Apple Watch are more than enough. The new smartwatch is suitable for those who play extreme sports but don’t want to use Garmin, those who lacked the aggressiveness and expressiveness of the Apple Watch design, and those who just want to emphasize the fact that they have the latest and the most expensive watch from Apple.