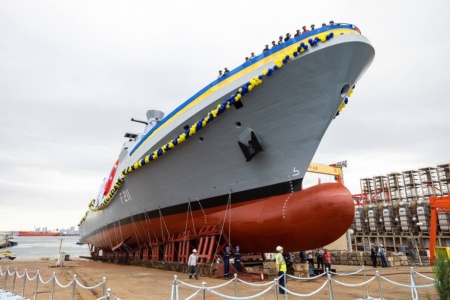 On October 2, the official ceremony of launching the Hetman Ivan Mazepa corvette into the water took place at the RMK Marine shipyard in Turkey. It will become the flagship of the Ukrainian Naval Forces and will replace the Hetman Sagaidachny frigate, which was sunk in Nikolaev in March 2022 after Russia’s full-scale invasion of Ukraine.

In December 2020, the Ministry of Defense of Ukraine signed a contract with the state company of the Turkish defense complex for the construction of a corvette for the Ukrainian Navy. According to the details of the deal, Turkish manufacturers were to build the ship at their own facilities to 80% completion. It was planned that by the end of 2022 the corvette would be delivered to Ukraine for retrofitting, and in 2023 the second ship would be laid down.

It was also reported about the formation of the future crew of the vessel and the election of the captain. The sailors of the Ukrainian Navy even had an internship on a similar Turkish combat corvette TCG Kınalıada.

“Hetman Ivan Mazepa” was laid down in September 2021, and in August of this year it was 70-80% ready. In connection with the Russian invasion of Ukraine, the corvette was completed in Turkey, and on October 2, 2022, it was officially launched into the water. The ceremony was attended by the First Lady of Ukraine Olena Zelenska, who is in Turkey as part of her official visit.

The corvette will be able to carry out anti-submarine operations and patrols on the high seas. Its design uses stealth technology – a set of methods that reduces the visibility of equipment in the radar, infrared and other areas of the observation spectrum.

According to the technical specifications, the ship is equipped with a RENK CODAG Cross-Connect power plant, which consists of a 31,000 hp gas turbine. and two diesel engines with a capacity of 5790 hp. Each of the motors drives one variable pitch propeller through a two-speed head gear. The cross-link mechanism distributes power from the gas turbine through both main gearboxes to two shafts.

The power plant of the ship can operate in three modes: diesel, gas turbine mode or CODAG mode (joint operation of diesel and gas turbine).

The combat use and design are similar to the Freedom-class intertidal ships (ships designed by Lockheed Martin as the next generation of the US Navy combat ship), but have more powerful weapons, radar and sonar systems.

Usually, corvettes of the Ada type are armed with one 76 mm OTO Melara Super Rapid cannon or two 12.7 mm Aselsan STAMP machine guns, however, other combat equipment is also possible at the request of the customer. Also in the arsenal of the corvette are two 324 mm torpedo tubes “Mark 32 Surface Vessel Torpedo Tubes” and anti-ship missile systems (8 Harpoon or Atmaca missiles).

The Hetman Ivan Mazepa corvette is expected to arrive in Ukraine in 2024.