During power outages, your consoles and PCs in most cases turn into useless pieces of plastic. Not everyone has portable consoles and powerful laptops, and you don’t really want to waste their charge. And previously, under such circumstances, you would have been limited to mobile games only.

But in 2022, smartphones are full of ports of “big” games from consoles and PCs that are almost indistinguishable from their original sources. We have collected ten similar games for you to make blackouts a little more fun. 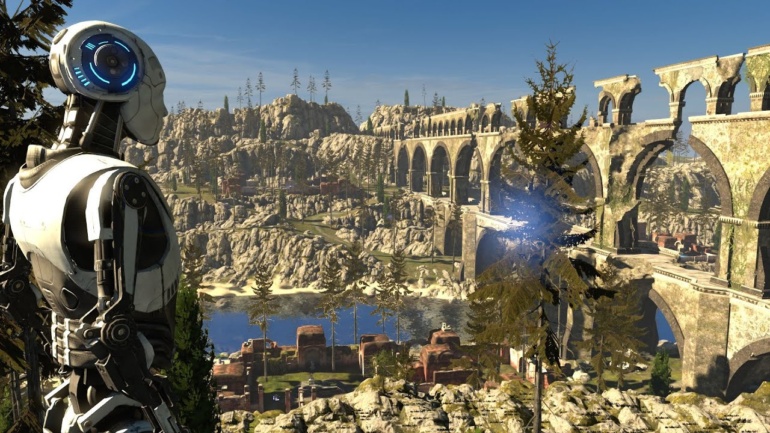 Studio Croteam is primarily known for its Serious Sam series of shooters, in which the emphasis is on destroying huge crowds of enemies. But in 2014, the developers surprised everyone by releasing the philosophical puzzle The Talos Principle. Which instantly became one of the best in its genre.

In The Talos Principle, in the role of a robot, it is necessary to solve various puzzles based on the competent use of special devices such as lasers and fans. The complexity of the puzzles gradually increases, so by the middle of it, be ready to rack your brains.

The version for smartphones includes the full original game, but, unfortunately, without an extremely high-quality addition Road to Gehenna. Instead, the port works just fine. 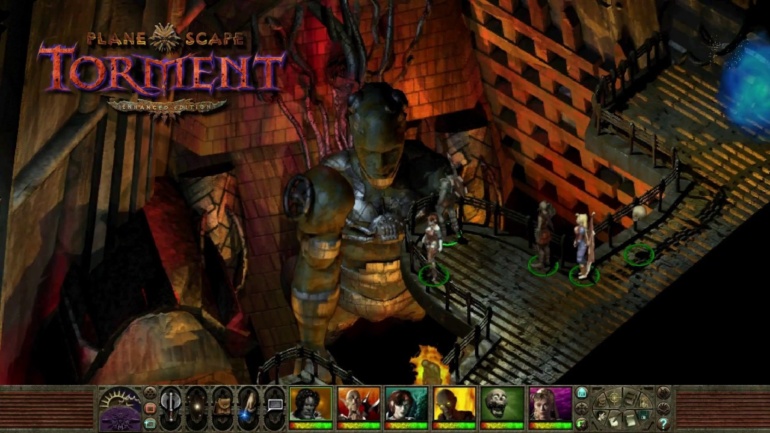 Planescape: Torment was released during the golden age of classic RPGs, but even against the background of their elaborate worlds and huge scenarios, it still managed to stand out. After all, in what game can you convince another character that he does not exist – and he will disappear from the game forever in reality? The entire local history consists of such amazing discoveries.

The main character is a kind of Nameless One who doesn’t remember anything about himself. But there are hints that he did something beyond terrible before the events of the game. And now his task is to find himself again, while simultaneously trying to come to redemption.

In Planescape: Torment, mostly everything is based on conversations, the role of battles in the game is reduced to a minimum. This approach, by the way, inspired the developers of Disco Elysium. Also, Planescape: Torment is distinguished by a huge space for role-playing, extravagant partners and a constant feeling of touch with something unique. After all, there were no decent analogues of the game (except for the controversial Torment: Tides of Numenera).

The game works great on smartphones, but be prepared for a lot of small text and icons. So the bigger the screen you have, the more comfortable the passage will be. 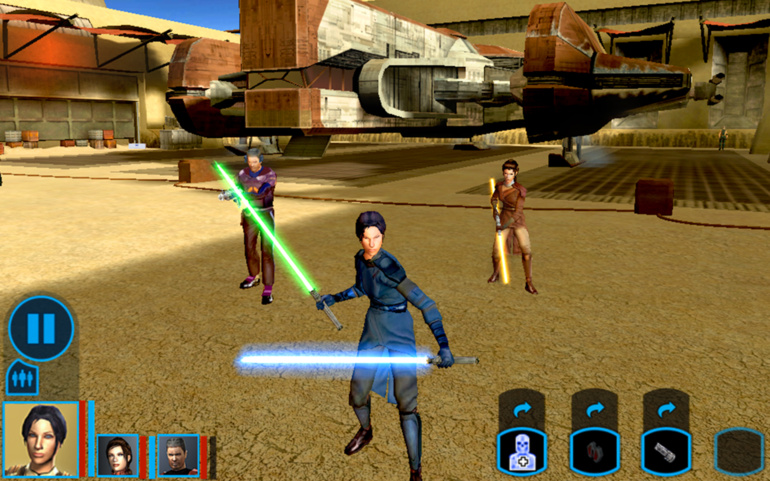 Another classic RPG, only more modern and based on the Star Wars universe. Moreover, this is one of the best games from the franchise, which managed to bring interest to the period of the Ancient Republic to a mass level.

In the world of Knights Of The Old Republic, the main threat is the Sith Revan and Malak. The game starts with the attack on the ship of the latter. As a Republic soldier who eventually becomes a Jedi, you must gather your team and explore different planets to stop the Sith.

The game successfully combines the depth of an RPG from the 90s with relative accessibility for an audience unfamiliar with the rules of the D20 system. The game adheres to the Star Wars canon very responsibly, and a large number of quests and characters will help you linger in the world of the Ancient Republic for tens of hours.

The game has been adapted to smartphones very well, the interface and controls feel responsive on small touch screens. 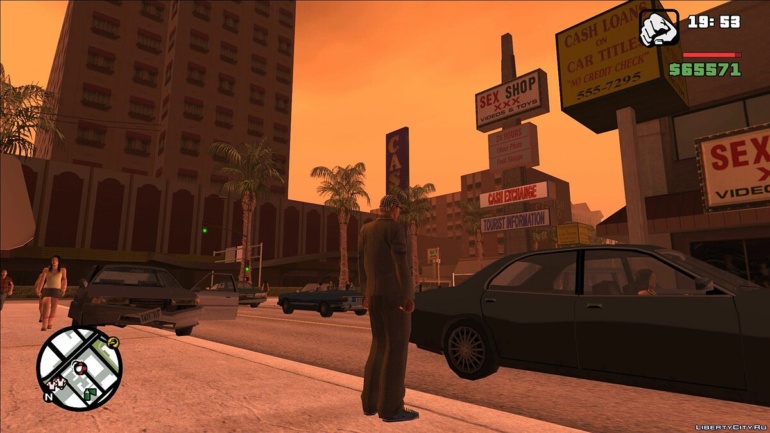 A game that doesn’t need extra performance. San Andreas, even in 2022, continues to be the best part of the GTA series for millions of players around the world. This part has become truly popular, so players regularly return to it many years after the first pass.

Grand Theft Auto San Andreas tells the story of Carl CJ Johnson, who returns to his home state of San Andreas after the death of his mother. And instantly he finds himself involved in a local criminal investigation. Which could potentially wreak havoc across the state.

Dozens of different missions, even more options for outside entertainment, a unique system of physical parameters of the main character and many secrets – in Grand Theft Auto San Andreas you can disappear for dozens of hours. And this is even without the online component, which Rockstar guesses about in the next part, but fully implements only in GTA V.

The version of San Andreas for smartphones turned out to be decent and in some places works even better than its counterpart from the PlayStation 2. And even if the controls are a bit overloaded, you can still go through the game without problems. Heart Machine studio’s first game immediately became an indie hit. The developers were inspired by the classics of the level of The Legend of Zelda, and the stories focused on the stories of a ruined, but still beautiful world. The story also became very personal for the main developer Alx Preston (Alx Preston, without an a in the name), who was simultaneously battling heart disease during the creation.

The game tells the story of a nameless Traveler who explores the ruins of a world that has survived a great disaster. The Traveler has access to technology from the past that can restore dying lands. But not only monsters will hinder him, but also a mysterious disease, due to which the main character is slowly approaching death.

Hyper Light Drifter looks and sounds incredibly beautiful. The game perfectly captured the aesthetics of the post-apocalypse in which you want to live. And it’s really fun to play, because the developers have managed to maintain a level of difficulty that poses a severe challenge, but still remains honest.

Hyper Light Drifter is perfectly adapted to smartphones, so you can immerse yourself in local history without any problems. 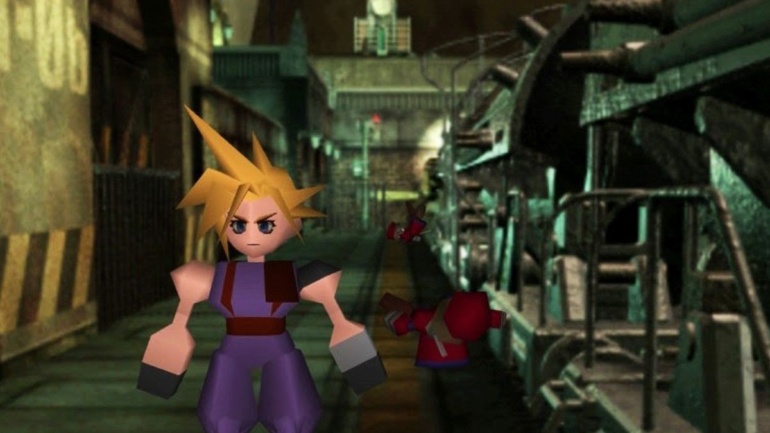 A classic of the JRPG genre and in many ways, if not the best, then the most popular part of the Final Fantasy series. Which lives successfully in 2022 thanks to a series of remakes-reinterpretations. The original Final Fantasy VII inspired creators around the world, and its gameplay and story haven’t gotten old in the slightest.

The plot focuses on the mercenary Cloudy Strife, who at the beginning takes part in an attack on a reactor that extracts energy from a planet called Mako. But the story quickly accelerates and turns into a large-scale story about corporate greed, ancient civilizations and the potential end of the world.

Don’t be put off by the caricatured character models in the game, because everything else in it is very serious. Dozens of hours of the main plot are about the same – additional secrets. Huge scope for creativity in the local combat system and great music. Final Fantasy VII doesn’t have any outright bad elements, and the outdated graphics look pretty good on small smartphone screens.

In addition, the mobile versions provided gameplay improvements. For example, by speeding up gameplay and skipping random battles. So it will be comfortable to play in any conditions. 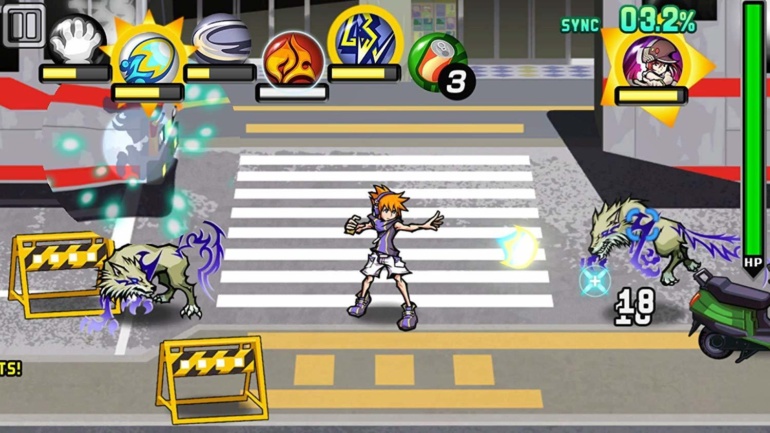 Another great JRPG that never managed to become popular, but still became a cult in certain circles. All thanks to numerous unique features that distinguish The World Ends with You from other games of the genre. Instead of command points for battles – gesture control, instead of fantastic locations – not quite ordinary, but Japanese Shibuya. And so in everything.

The plot revolves around the so-called Game of Reapers. Its participants are the main characters of the game. And their entire fate will depend on the results.

The original game made the most of the Nintendo DS’s capabilities, such as its two screens. The mobile version lacks such innovations, but the touch controls still fit The World Ends with You perfectly. 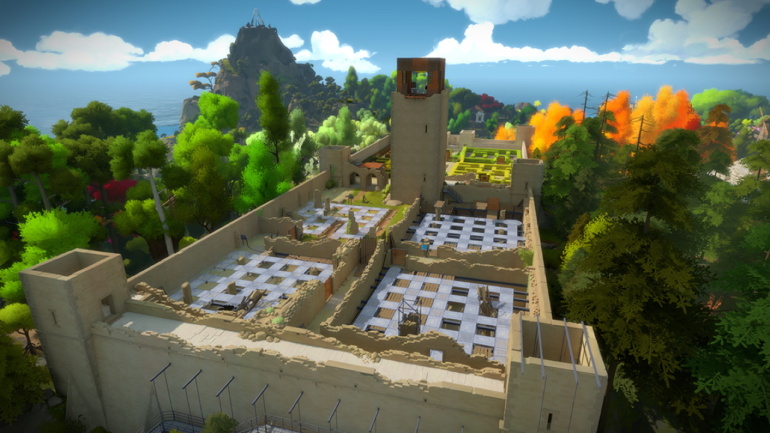 Game designer Jonathan Blow started working in the game industry back in the mid-90s. He had a hand in the console ports of Doom, Flow, Deus Ex: Invisible War and Thief: Deadly Shadows. But now he is primarily known for his puzzle games Braid and The Witness.

The basis of the latter seems deceptively simple. You need to explore the island and solve puzzles, the whole point of which comes down to passing through labyrinths (or connecting the dots here as you like). But very quickly puzzles grow new features. And now you need to look for clues to the passage in geometric shapes, the environment and sounds.

The Witness squeezes everything and more out of its concept. At the same time, it tries to provoke great philosophical reflections in you, but at the same time it does not force you to do anything and does not impose any conclusions. In fact, Zen Buddhism in a game format.

Given the core of the gameplay, The Witness feels perfect on touchscreens. As if the game was originally developed for smartphones. 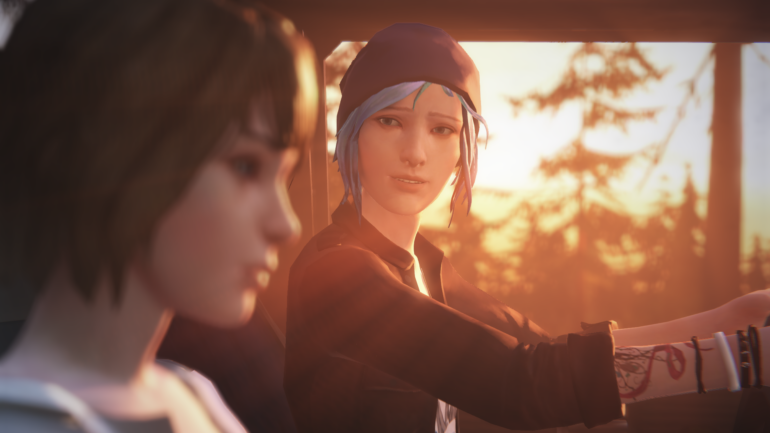 The first installment of Life is Strange continues to be one of the best games in the interactive cinema genre well into 2022. She is so beautiful that even sequels from the same developers could not come close to her magnificence.

The story tells about the girl Max Caulfield, who returned from Seattle to the town of Arcadia Bay, where she spent her childhood. Now she has to get used to new acquaintances and establish relationships with old ones. Everything is complicated by the appearance of Max’s superpowers, thanks to which she can rewind time.

Life is Strange works well as an interactive series with lots of branching choices. But a much stronger play attracts as a well-tried story about American teenagers, who have enough problems and conflicts. Something similar could be presented to us by Netflix at its best.

Given the simplicity and accessibility of controls, Life is Strange plays well on smartphones. And even the graphics did not suffer much. 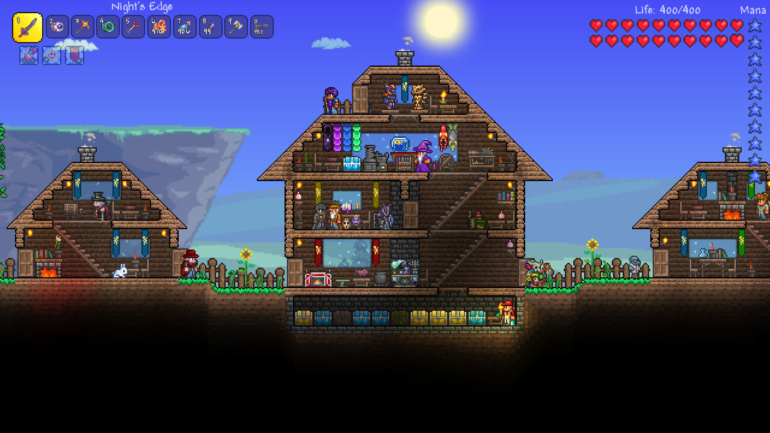 Terraria is regularly referred to as Minecraft in 2D, but that’s a false comparison. After all, if Minecraft is primarily about creativity in buildings, Terraria brings role-playing elements to the fore. There are enough types of weapons, enemies and special locations here. And many key points were precisely the authors of Minecraft who peeked into Terraria.

However, here, too, you can arrange a palace for the most sophisticated preferences. However, Terraria has enough bosses and unusual conditions. For example, at one point you will have to fight corruption, which gradually devours all biomes. Terraria plays fine on smartphones, although the large number of small icons can be a bit confusing.