Skip to content
Home Technology What to play in December. Game releases of the month 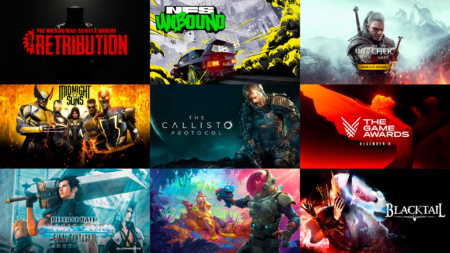 As the 2022 gaming season draws to a close, there will still be a few game releases in early December, but throughout the month there will be smaller games and remasters to look out for as well.

The original The Walking Dead: Saints & Sinners was one of the few full VR helmet games. The Walking Dead: Saints & Sinners – Chapter 2: Retribution will once again immerse players in a virtual city full of zombies, and a whole bunch of opportunities to destroy the living dead. For now, the game is only available on PC, but on March 21st it will reach the PS VR2, along with an updated first part for the new helmet from Sony.

We have written about the game many times, and the developers are flooding the players with videos in such a quantity that it becomes interesting what they will surprise us with in the game itself. The Callisto Protocol is a horror from the authors of the original Dead Space, and it is safe to say that the new game by Glen Schofield is nothing more than an ideological descendant of the already iconic series.

We are interested in the policy of KRAFTON, Inc., which publishes the game and for some reason does not sell it in the Ukrainian PS Store, while the game is available on Steam at a price of UAH 799.

Although the game will be released on December 2nd, EA Play Pro subscribers already have the opportunity to play the full version of the game, and the reviews we’ve seen have been mostly positive. Some even compare the game to Underground 1&2 and the Most Wanted/Carbon dylogy. We hope that the new part will really save the series and return it to its former glory.

A tactical strategy with PRG elements from the studio Firaxis, the authors of X-Com, and also with Marvel heroes. The first evaluations of profile printing are mostly positive, they praise the gameplay and slightly criticize the technical shortcomings, which is a common thing for the studio.

Interestingly, different journalists praise and criticize the same elements of the game, for example, the story or the card system. However, everyone agrees that Marvel’s Midnight Suns turned out to be an unexpectedly good game.

Date: on the night of December 9

Yes, The Game Awards isn’t a video game, but it’s the industry’s biggest event, the “gaming Oscars” as it’s been called, even though we all know where the Oscars really are. In addition to the winners in thirty-one nominations, the event will show new trailers of long-announced games, a live orchestra performance, we will hear the words “exclusive” and “World Premier” many times, and, of course, star guests from the game and film industries.

The remaster of the prequel Final Fantasy VII tells the story of Cloud’s friend Zack Feyre, a member of the Soldier unit. Updates have undergone almost all elements of the game, including graphics, music and even the combat system. Crisis Core: Final Fantasy VII Reunion will be a great opportunity to return to the beloved fantasy world before the release of the next Final Fantasy.

Justin Roiland, one of the authors of Rick and Morty, created his own video game development studio back in 2016 and will only now release a full-fledged, almost AAA project. High on Life is a first-person shooter with characteristic Rick and Morty humor and an indifferent attitude towards almost all taboos in the industry. And here the weapon is a full-fledged character that comments on everything and tells you how to deal with some non-game characters.

The Witcher 3: Wild Hunt update for next-gen consoles as well as PC will bring support for ray tracing, DLSS and SSR on PC, a new camera angle, general visual improvements and, more importantly, cross-platform saves between all modern consoles and PC.

Also a new quest, for the successful completion of which you can get armor and clothes inspired by the Netflix series. More importantly, Trophies are not transferred to the new version on all platforms, but progress can be transferred. For all owners of the game on all platforms, the update will be free.

In Blacktail – A Witch’s Fate, you will have to play as a young Baba Yaga on her way to becoming a guardian of the forest, or conquering it along with all living creatures. This is the first game of the Polish studio, launched in 2019 by industry veterans who worked on AAA games. Recently, the publishing house of the game was signed by Focus Entertainment, which two months ago announced the publishing house of the Russian game.

Highwater is an isometric adventure game set in a world that has been swallowed by the global ocean. The game doesn’t have a final release date yet, but it’s still slated for December. Perhaps the release day will be announced by The Game Awards.