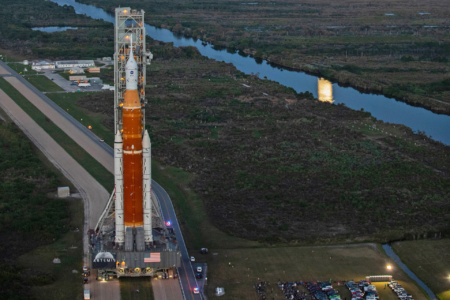 The long-awaited launch of NASA’s Space Launch System rocket was pushed back from September 27 to mid-November following news of Hurricane Ian. The space agency has announced plans to launch the Artemis program between November 12 and 27. The SLS missile was rolled back to the assembly shop to protect it from the storm. NASA successfully secured the rocket after hours of travel.

Category 4 Hurricane Ian hit Florida as a tropical storm as it hit Kennedy Space Center. NASA states that the Artemis flight equipment was not damaged and that the objects suffered only minor water intrusion.

The rocket will send the uncrewed Orion capsule on a journey around the moon, paving the way for future missions that will take the first woman and man of color to the lunar surface. The first launch attempt was aborted after the rocket experienced engine problems, and the second was marred by a serious leak of refrigerated liquid hydrogen fuel.

A subsequent check of the rocket’s fuel system showed that leaks were still present, but at a manageable level. Now that the rocket has returned to the assembly site, NASA said the rocket and the abort system are undergoing additional tests. This system serves to destroy the missile in case of deviation from the course.

Starship +1: NASA searches for another monthly lander retailer for the Artemis mission