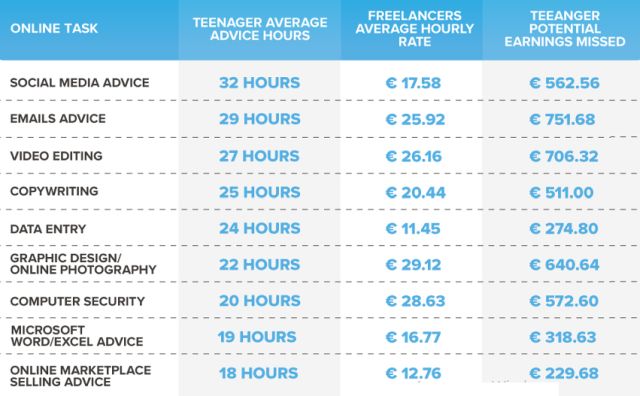 Despite the somewhat pretentious title, this is exactly the case, read on and enjoy the prices for child labor. About the benefits of knowing “imported dialects”. And also about what is called the beautiful word feedback, i.e. about you, my dear readers, thanks for this very feedback, here this word has nothing to do with football jargon.

Let’s go! Today I promise you some interesting and informative things. Almost all media outlets practically ignore the topic of readers’ reactions to what has been published, thanks for attaching the Disqus engine to the end of the page. Kind people (in your face) throw in my mail a lot of interesting things, sometimes overwhelming. With a warm word, I regularly remember everyone who writes to me. And if your letter was not included in our next review, then do not be discouraged. It will fall into the next one or will be used by me as a starting point for digging, but it will not disappear.

Children – our not only happy, but also an expensive future?

I use my relatively fluent knowledge of a couple of imported languages ​​and regularly “graze” on specialized import resources. Work assumes this, and I want a little “for the soul” too. Sometimes on “their” forums I allow myself to write something. Recently, I no longer remember what I commented on in passing, and soon in response I received a whole study of the modern child labor market in my mail. Uhhh … How difficult it is for them to live, if you translate every step or word into hard currency! Or is it easier to live like this? Okay, let’s get down to business.

In order to immediately settle with the original source, God bless him, the link to the pdf file is here, the link to their thematic press release is here. High-quality, professional work, I directly enjoyed the well-structured and organized material. The link to the company’s research itself and the methodology is here.

So, what do our children end up with from us and what do we get from them? You also need to understand the specifics of the mentality of the country, where it is customary to measure everything with a hard currency. I am not suggesting that this is bad or wrong. Or, on the contrary, that money is the most accurate measure of the quality of relationships, I also do not claim. A shaky territory to which I better not go, you forgive me. In Russia, the mentality is different, and again I do not presume to argue that it is better or worse. He’s just different.

The Prolifics Testing company studied the behavior of 2,664 young people aged 13-18 and found out what IT tasks young people helped their parents solve, as well as how much money teenagers lost without receiving honestly deserved fees from their parents for qualified help.

Prolifics Testing meticulously calculated everything and found that most often parents turn to their children for help in social orientation and such operations as uploading photos and videos, operations with hashtags and the work of the popular platforms Facebook, Instagram and TikTok. On average, teenagers spent 32 hours a year answering questions on these very popular topics. If their work were fully paid, then each teenager would earn on average a little more than 562 euros per year on counseling on these topics.

Email is the second most important and time-consuming service, 29 hours. Here, the requirements for the qualifications of a teenager are already slightly higher, and the prices of freelancers confirm this. Alas, teenagers lost on average almost 752 euros per year for each teenage soul to help them use email. And so on, there are many more points. I did not translate the plate, I insert it “as is”, because in the plate and so everything is clear. There is also a funny thing: for example, consulting on Microsoft office products turned out to be almost the lowest paid IT service, I would never have thought of it. In general, Prolifics Testing counted the money lost by the average teenager in the amount of 4,567.91 euros per year, which is about 380 euros or about 34 thousand rubles. per month. Yes, it would be a good addition even to the rather big foreign scholarships. I’m wondering how many kids there will read the original of this material and start a lawsuit against their parents about the merciless and free exploitation of child labor? After all, it will become with them, the mentality is a serious thing. According to the law, parents are obliged to support their children, but the same laws are shyly silent about the duties of children to help their parents to the best of their ability, so a lawsuit has some prospects. Probably there are, they like to sue there for a variety of reasons.

And it’s a sacred thing to complain about parents abroad to the police, you can run into serious trouble with a slap on the head, at least a large fine. I read about an anecdotal (in my opinion) family vendetta, the kid called the police for her mother, as the child took offense at the parent for the head. Mother paid the fine, realized and was imbued, but she also harbored a grudge. And in turn, she set the police on the girl, catching the child smoking weed in the company of a young man who, unfortunately, had just become an adult by that time. Well, the guy went to jail. But everything is civilized and according to the law, the slap on the head from which everything started is a serious matter.

Returning to our topic today, a list of the most popular tasks that teenagers help their parents with:

In addition to the above, an impressive 71% of teenagers admitted that parents ask them to help solve any “technical problems” that parents face when communicating with their boss while working from home.

About the intrigue with the disconnection of the gardening BS

Recent material can be read here, a slightly mysterious story with a disconnected base station on the territory of a gardening partnership. There was a kind person who expressed his vision of the situation, as they say, on the other side of the barricades. I quote with pleasure, quite informative material turned out.

“Sergei, have a good day! About today’s “Garden affairs”. With electricity, of course, everything is great. But history must always be viewed in documents. What happened in the turbulent 2000s is no longer very appropriate now. What was once an agreement in words should now be in Rosreestr in the form of ownership or lease on land AND an agreement with an energy sales company (only they can resell electricity). Yes, and there are often cases when an antenna-mast structure is erected only for the needs of SNT, the position is terminal and there is only one transport receiving antenna and one sector antenna.

And then, to improve the radio coverage, they hang 3 more standards + 5 antennas. And then they also mount transport antennas for the following positions in neighboring cottage settlements + Wi-Fi / Wi-Max antennas for corporate users and, according to the requirements of the Ministry of Emergency Situations, sirens and equipment for air navigation. And this “Christmas tree” eats three or four times more energy. To put it simply, up to 20-50 thousand rubles a month. Well, the power engineers who connected SNT are beginning to torment SNT with fines for such a large unscheduled consumption.

And this is another option when this tower does not accidentally end up on someone’s land due to errors of cadastral engineers. So kindness in the past now turns into a fantastic pain for operators – lease agreements, electricity contracts with thousands of contractors, not all of whom are ready to agree with simply the benefits of communication, but also want compensation for the costs of cadastral work, fines from the administration for poor-quality maintenance of the territory, untimely plowing and mowing grass in the area with a tower, fire problems…. Everything is not as simple as it was said in the near 2014 ”.

Yes, really, not everything is so simple and clear. I readily admit that once they really plugged in one small antenna only for the needs of the garden partnership, all this was done at the level of direct contacts and agreements. Yes, and this station could at first eat a minimum, and then consumers multiplied and appetites grew, over the past years, you never know who has managed to hang something on this small BS. And those who initially negotiated among themselves are already in completely different regions, and now you will not find the ends. By the way, by the way, yes, you also need to mow the grass, otherwise they will torture you with fines and they will be right, it is scary to read about completely burnt-out villages! And who should mow this grass-ant and other amenities, including fire-fighting, to make? Yes, the work of cell phones is not only to sit in a cozy Data-center and look at the screen, the main part of the work in the literal sense of the word “on the ground”.