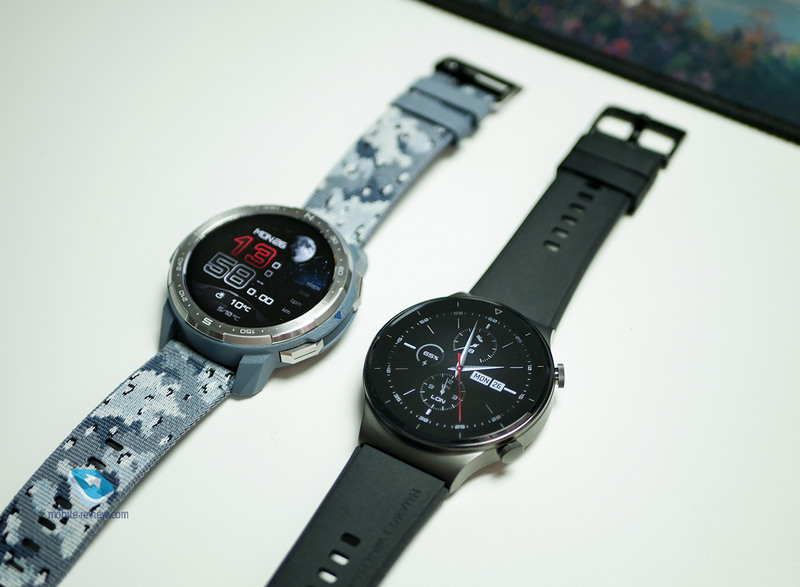 Just the other day, a couple of watches from Huawei and the Honor brand were released in Russia. The former were named Watch GT 2 Pro, and the latter – Watch GS Pro. It is very strange, but Honor now does not have the Magic prefix, that is, they, like Huawei, are called Watch, followed by an alphanumeric name.

Watch Huawei Watch GT 2 Pro, as you might guess, belongs to the flagship segment of devices and is a premium model. This is evidenced not only by the price of 20 rubles, but also by the materials. The manufacturer claims that the GT 000 Pro uses a sapphire crystal, a titanium alloy case and a ceramic base. I am a big skeptic in life, so I have little faith in all these ceramics and titanium cases. But let it be as Huawei says. It’s just that the Samsung Galaxy Watch 2 in a titanium case costs 3 rubles.

But with the Honor Watch GS Pro, everything is much simpler: the device offers protection from water, dust, dirt and mechanical stress. At the same time, it is almost a complete copy of MagicWatch 2 and GT 2 Pro.

However, it is worth noting that almost all manufacturers of smart watches are now marking time, not offering anything original and new. Color and materials change, but the internal component remains the same.

Let me remind you the prices: Huawei Watch GT 2 Pro costs from 20 rubles (depending on the version – classic or sports), and Honor Watch GS Pro – 000 rubles.

I’ll start, perhaps, with the most original device in terms of materials – GT 2 Pro. This is a classic smart watch from Huawei, which reminds many of GT 2. In the new version, the glass on the front panel (and this is no less sapphire!) Is smooth and only at the edges has a sharp drop on the case just a couple of millimeters. Notches are visible under the glass every 5 minutes. They do not spoil the look and quite harmoniously fit into the overall meaning of the design.

The side faces of the device are made of titanium alloy. If we talk about the material, then it has high strength: it almost does not get pressed, does not scratch and does not lose its gloss. And in its natural form, titanium is biocompatible with almost all types of human skin, that is, it is not capable of causing an allergic reaction. Moreover, the bottom of the watch is made of ceramic!

And here doubts begin to torment me. Why does the GT2 Pro with titanium, sapphire and ceramic cost the same as the GS Pro with a metal case? After all, from a technical point of view, they are the same. And it is also embarrassing that the regular version of the GT 2 costs around 15 rubles. Are such unusual GT 000 Pro materials only costing an additional 2 rubles? But the sports version now costs 5 rubles in general. Well, I don’t know … Write in the comments what you think about it. Nevertheless, the GT 2 Pro watch looks good: strict and concise. Personally, I have a desire to believe in the use of premium materials in this model.

I posted photos of the Honor Watch GS Pro on my social networks. The reaction of people was ambiguous: they say, what an ugly watch. I had a version of “Gray camouflage” on my review: a light gray khaki fabric silicone strap, a black metal buckle, a steel case (the surface is apparently covered with polycarbonate), painted gray. In real life, they look better than in the picture. However, some points confused me: That is, purely visually, the watch looks budgetary, despite its cost of 20 rubles. However, such things are purely subjective.

The Honor brand emphasizes the durability of materials in the GS Pro watch according to the MIL-STD-810G standard. In theory, they can withstand temperatures from -40 to +70, sand, dust, moisture, salt fog, vibration, shock, and so on. The Huawei watch is more familiar and pleasant on the wrist. Probably because they are thinner, ceramics are slightly nicer to the skin than plastic. In addition, the GT 2 Pro’s base is more streamlined. However, those who will take Honor are unlikely to look towards Huawei, since the watch has different positioning: some are completely protected from external influences, others are about design and materials. In the table with the parameters, he indicated that the Huawei Watch GT 2 Pro uses a 455 mAh battery, while the Honor Watch GS Pro has a 790 mAh battery. Officially, the gadget from Huawei “lives” up to 14 days, and the watch from Honor – up to 25 days.

I got the following figures under the same load (all notifications, a couple of hours of classes per week): Huawei sat down in 6-7 days, and Honor was discharged after about 15 days.

Moreover, the GT 2 Pro battery went to zero so that it took several hours to charge until the device was restored to work. That is, it turned on, showed 0%, turned off. He began to show signs of life after about five hours.

And this is very strange, since other Huawei watches already at 10% asked for charging and stopped responding to interactions with them.

The advantage of the Watch GT 2 Pro is its support for wireless charging. And the Watch GS Pro is powered by a cable with a magnetic holder. Basically, this is a typical Huawei / Honor watch with almost no software changes. That is, the animation has not been fixed here – it is still with a small number of frames and lagging scrolling of the list. Personally, it annoys me a little. I’m ready to lose a couple of days of device operation, but get at least 20-25 fps animation without brakes.

There is a similar training content in the Honor watch.

You can learn more about all modes of operation of devices from these materials:

Another interesting thing. It was only on the Vivo V20 that I was able to switch seamlessly between devices in the Health app. In other devices, I could not even reconnect, for example, to GT 2 Pro, if I had added GS Pro before. I had to reset the clock. Probably Google Android 11 is somehow “to blame”.

The call function is implemented in the same way as in Huawei GT 2 and MagicWatch. You can add several contacts to the watch, which you can call directly from the gadget menu. The sound is relatively loud, the interlocutor is heard well. You are heard as if you are using a speakerphone. It is advisable to speak closer to the microphone, but not directly into it, so as not to create overload.

As for the messages, they still cannot be answered, there are no templates either. Again, this feature is implemented in the same way as in other Huawei devices. But with the dials, the issue has finally been resolved. Now there are much more of them. True, when I first connected GT 2 Pro, I found about 200 “watchfaces”, and after a couple of days there were 20 left. Either the filter by country somehow worked, or the “Health” software was updated. In general, I did not understand where the rest disappeared. You can see in the video what they were.

And GT 2 Pro also implemented the Share OneHop function – transferring photos and dials by touching the phone clock. But it only works with Huawei devices. The company’s website says that the software has remote control of photography. However, I didn’t have such a thing. Probably we need an EMUI gadget again.

Honor Watch GS Pro also has about 20 dials. Now you can upload your own using the installation manager.

It is difficult to call the Huawei Watch GT 2 Pro and Honor Watch GS Pro an update. Rather an addition to the current lineup. If there are no questions to Honor – a typical device from the company in a protected case with a bunch of training programs and functions, then with the GT 2 Pro, it seems to me that something is wrong.

I still can’t figure out why a sapphire crystal, titanium alloy, and ceramic device costs, plus or minus, as much as Honor’s metal GS Pro. And here’s the news on the official website: The price of the HUAWEI WATCH GT 2 Pro in the classic style (Classic edition) is € 349, and the sports HUAWEI WATCH GT 2 Pro (Sport edition) is € 329… That is, for classics – 32 rubles, and for “sports” – 000 rubles.

Naturally, for the end consumer, the lower the price, the better. But this loses the premium quality of the device. Imagine that Vertu smartphones would cost 50 – 000 rubles.

However, both devices meet all modern requirements.