Indoor lighting has gone from functional to fun in the last few years, whether that involves simply screwing in a couple smart light bulbs or adding complicated, colorful effects that can change the entire mood of your home. Nanoleaf is one of many companies forging ahead with innovative, colorful smart lighting products, and its latest offering — the $199 Nanoleaf Lines — might just be the most entertaining yet.

The Lines join Nanoleaf’s growing catalog of LED wall panels in various sizes and shapes, this time adding a new trick — backlighting. Available for pre-order now and on sale November 8th, these are ultra-lightweight LED light bars with dual-color zones where each zone is capable of displaying one of over 16 million RGB colors. They can be mounted on the wall or ceiling and can go from a soothing sunset scene to an intense nightclub look (complete with beat throbbing motion) with the touch of a button (or a voice command). 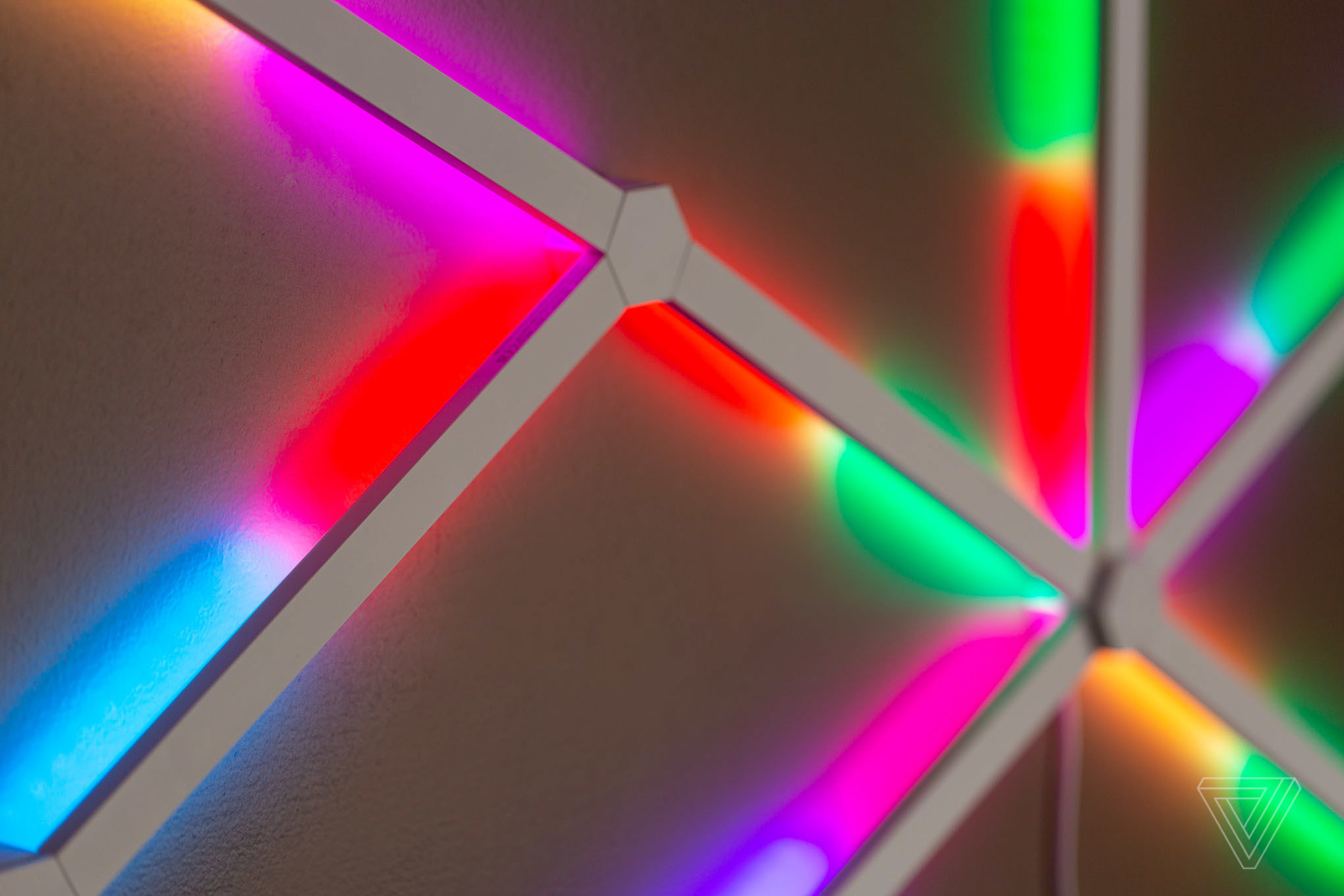 Where Nanoleaf’s previous release, the elegant wood-look Elements panels, was a move towards more traditional home decor, the Lines are a shift back to the company’s core audience: those who want a futuristic vibe in their living space. They are ideally suited for setting up behind a gaming monitor or big-screen TV where you can tie them into Nanoleaf’s screen mirroring capabilities (but you’ll need to use a computer for this integration).

The most notable feature of Lines over Nanoleaf’s other wall-lighting options is that they’re backlit. Combined with a 20-lumen rating per Line (a setup of nine generates 180 lumens), they can work as ambient lighting behind a computer screen as they won’t run the risk of blinding you when you accidentally set them to turn on at full brightness one morning (I speak from experience).

As an ambient lighting option, they are feature-rich, coming with 19 pre-loaded scenes in the Nanoleaf companion app, including standard smart lighting modes like Reading, Warm White, and Daylight, and fun ones that take advantage of all those colors. My household enjoyed the Blood Dripping option this past Halloween, and the Prism and Raspberry Lemonade scenes were also favorites for their fun pops of color. Despite options such as Reading, however, these won’t work for task lighting — they just don’t give off enough light.

Most Scenes have a motion setting where the lights cycle through different patterns, and some have a rhythm setting that uses a built-in microphone to pulse the lights in time with any music playing. Both of these effects are impressive, with smooth motions, seamless color mixing, and no unsightly stuttering or flickering.

It’s also possible to create your own Scenes, but setting one up is tricky and in my testing they never seemed to work as well as the preset ones. I preferred to rely on the many other Nanoleaf owners who have mastered the overly complicated app and uploaded scenes that I can download to the lights.

Unlike Nanoleaf’s recent panels, the Lines aren’t touch capacitive, so you can’t use them as smart home buttons or play games on them, but they do have a Thread radio inside and can act as a Thread Border Router. This means they should integrate smoothly with the new smart home interoperability standard Matter when it arrives next year. In the meantime, Lines can act as a hub for Nanoleaf’s Essentials lighting, which consists of smart A19 bulbs and standard light strips.

My household enjoyed the Blood Dripping option this past Halloween

All of Nanoleaf’s products work with Apple’s HomeKit, Amazon Alexa, and Google Home, as well as SmartThings and IFTTT. This lets you control them with your voice and add them into automations or routines.

I added a Vibrant Sunrise scene to my Alexa Good Morning routine, so when I tell the assistant Good Morning, the Lines mimic a natural, gradual sunrise with red and orange hues, turning to yellows and whites. I also tried out a few schedules in the Nanoleaf app, including one that switches to Tuscany Sunset at 7PM, gradually ramping up the brightness over 10 minutes, then switching off three hours later. These all worked reliably and accurately, and I had no problems with connectivity during my testing (the Lines connect to 2.4GHz Wi-Fi).

The modular design of the Lines makes them better for filling up a blank wall with fewer pieces than Nanoleaf’s other options, which also means it’s less expensive to create a full design. You can link up to 18 Lines per power supply, and you get nine Lines for $200, as opposed to seven Shapes for the same price.

The connectors give you six angles to choose from, and you can easily span a small wall with nine or 12 pieces (a starter kit comes with nine, the add-on for $70 has three). With the Elements and Shapes options that I’ve previously tested, I’d need around 10 to 14 (depending on size) to fill a similar space.

This brings me to their biggest drawback — the price. The least expensive of Nanoleaf’s decorative wall lighting fixtures (and a proper bargain compared to the price you’d pay for a piece of art to fill a large wall), $200 for LED light bars is still a tough sell. You can pick up smart LED light strips for under $30 and get a somewhat similar effect. Plus, if you don’t like the look of white bars on your wall when you don’t have them lit up, you need to pay an extra $20 for nine “skins” (pink or black) to dress them up.

The Lines look okay when turned off — not as good as the Elements panels, whose faux-wood look resembles a wood sculpture on the wall — but good enough because the design is more distinctive against a wall (assuming it’s not painted white) than Nanoleaf’s other panels, which have a more “blob of white plastic” aesthetic when switched off.

If you do decide to splurge, installing Nanoleaf Lines is surprisingly simple. Really, the most challenging part is deciding what pattern to use. While Nanoleaf has made it relatively easy to reposition should you change your mind, the paint on your wall is not likely to be as amenable, and unlike the larger panels, the lines won’t cover up any mistakes if you do mess up.

The best course is to lay out your design on the floor or a table first and then carefully transpose it. Nanoleaf offers lots of handy suggestions in the box and a virtual visualizer in the app that lets you design a pattern in the app and see what it will look like on your wall.

Placing them on the wall is simple; the Lines are thin plastic bars with a triangular tip that snap into a hexagonal connector with six slots. Put a connector on the wall using the supplied double-sided adhesives and snap the Line or Lines into it.

You can ceiling mount these, too, and they’re super lightweight, but Nanoleaf does recommend using screws to affix them (sold separately). In any scenario, you’ll need to plan around a nearby outlet and find a way to work the almost 15-foot cable into your setup.

Unfortunately, the connector is a different design from Nanoleaf’s Shapes and Canvas panels, so you can’t link these with an existing setup you have, which sort of kills Nanoleaf’s whole modular lighting pitch dead in its tracks. They did add the ability to go around corners, which could be pretty cool — but you have to buy special connectors for that.

If you are looking for a way to add some futuristic fun and vibrant color into a gaming room, living room, bedroom, or other space, Nanoleaf’s Lines are an excellent option. Yes, you can pick up some LED light strips for $30 and get a somewhat similar effect, but these are very well-designed, making it simpler to achieve a more interesting, eye-pleasing design that is more feature than fixture. With a two-year warranty and future-proofed smart home tech inside them, they’re also likely to last you a lot longer.

They were looking for air defense and artillery depots: in Odesa, the SBU detained a couple of spies (photo)

Both were citizens of the Russian Federation, who were sent to Odessa four years ago. The SBU detained a couple of spies / SBU The Security Service…

The dream game: journalists shared their impressions of Diablo 4 and laid out new gameplay

According to reporters, this is exactly the project that fans deserve. Diablo 4 / photo by Blizzard Today, December 8, the ban on the publication of preliminary…

Who made it to this list – read on. Four signs of the Zodiac will change your life / msn.com December 8 will be a full moon,…

The Ministry of Defense adopted the “Dzvin-AS” control system: there were problems with it earlier

According to Reznikov, the system successfully passed departmental tests in the spring of 2022, and later – state tests. The Ministry of Defense adopted the “Dzvin-AS” management…

Forecaster on the weather in the coming days: “The temperature will jump to spring marks”

According to forecaster Nataliya Didenko, a significant increase in temperature is expected already in the coming weekend. Weather in Ukraine / photo In Ukraine, a significant warming…