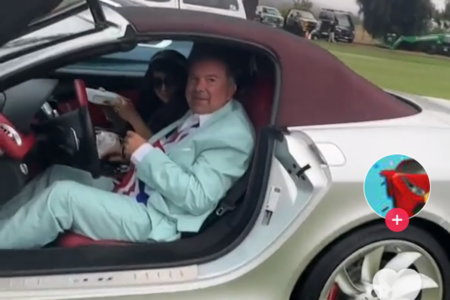 Apple VP of Purchasing Tony Blevins fired from the company after making a rude comment about the job in a TikTok interview. Blogger Daniel Mack posted a video asking Blevins what he does for a living.

“I drive cars, play golf and caress women with large breasts. But I take weekends and vacations.”

The video does not mention Blevins by name or mention his position at Apple, although he does note that his job offers “a dental plan from hell”.

Daniel Mac’s TikTok video format is to approach people in luxury cars and ask what they do for a living. To his credit is an interview with President Joe Biden in a Cadillac Lyriq.

The video launched an internal investigation at Apple, which resulted in Blevins being removed from his position as head of his team. The report said the video angered some employees who felt the comment was not in line with Apple’s goals of empowering women at the company.

Apple is known to be relatively strict about content posted by its employees. In an internal document regarding social media posts, the company states:

“We want you to be yourself, but you also need to be respectful in messages, tweets and other online communications.”

Commenting on the situation to Bloomberg , Blevins said he “would like to take this opportunity to sincerely apologize to everyone who was offended by my misguided attempt at humor.” The publication notes that Blevins’ statement was a distorted quote from the 1981 film Arthur.

Tesla insists that drivers keep their hands on the steering wheel when using Autopilot and the Full Self-Driving (FSD) beta version, but has previously been unable to…

The updated DreamWorks Animation screensaver, which the team worked on for 8 months, will allow you to re-acquaint yourself with the characters of the studio’s most popular…

Tesla is recalling more than 80,000 electric cars in China due to defects in software and seat belts

This week has been a bad one for Tesla, which is the third time it has announced a recall of its electric vehicles. The Wall Street Journal…

Review of the series “Wednesday” / Wednesday

On November 23, the iconic Addams family returned to the screens: Netflix presented a new series about Wednesday Addams. Other members of the strange family also appear…

Project Zero – Google’s zero-day vulnerability research group – suggests that millions of phones with Mali GPUs are at risk of the exploit, despite ARM providing a…

A Caterpillar dump truck with a giant electric battery successfully covered a distance of 7 kilometers, accelerating to 60 km/h.

Caterpillar, a leading manufacturer of construction and mining equipment, has successfully tested its first 793 electric quarry dumper in a move towards sustainable mining. Meet our first…