SpaceX’s Starlink internet service is now available in 32 countries. According to the company, deliveries of equipment in these countries will be carried out “immediately”. This is all the more impressive given the fact that the operator has previously experienced constant problems with the availability of equipment, due to which customers had to wait for months for delivery. 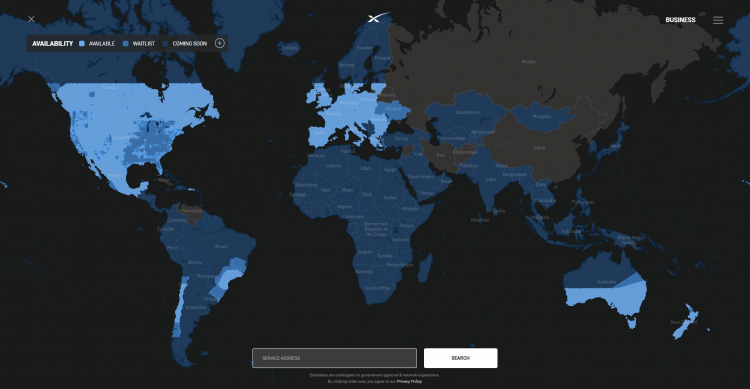 Starlink shared on Twitter a screenshot of the service’s availability map showing large parts of Europe and North America, as well as parts of South America, Australia and New Zealand. In a significant part of the rest of the world, including all of Africa, according to the map, the service “will appear soon”, while Russia, Belarus, China and some other countries are in the “grey zone”.

It is known that earlier this year only 25 countries were supported against 32 now, but it is the immediate availability of equipment that is more remarkable. Reddit is full of stories where customers had to wait months for equipment to arrive. According to Rest of World, the majority of Starlink users were in North America as of April, with a large proportion of the rest in Australia, New Zealand and Europe.

In the US, after the March price hike, the kit now costs $599 with a monthly fee of $110. The availability of a particular address for the service can be found on a special map . Earlier it was reported that only 2% of Starlink users live outside the Western countries.

Xbox leaves Russia, the fate of Russian-language voice acting is in question

Microsoft officially announced its plans to completely withdraw its business from Russia. Along the way, the company has already begun blocking Windows downloads for Russian IP addresses, and now appears to be liquidating its Russian Xbox office. This is reported... Read more

Content Equipment and design Software cameras Performance and Benchmarks conclusions Xiaomi has introduced another “flagship killer” from the POCO F series – the F4 model. And if last year in the POCO F3 review I complained that the new product... Read more

At the beginning of next week, the AliExpress sale starts, where there will be a large number of interesting lots. How about the top OnePlus for 2022? Yes, the same OnePlus 10 Pro with QHD +, Snapdragon 8 Gen 1,... Read more

Google is notorious for the “reliability” of keeping its secrets. Literally every year, early samples of the future tops of the Pixel line magically end up in the hands of users, and then on the Web for everyone to see.... Read more

On July 5, a presentation of new Republic Of Gamers products will take place, where the main character will be the ROG Phone 6 game phone. Earlier, ASUS confirmed that the device will be built on Snapdragon 8+ Gen 1,... Read more

Let’s digress from technology for a moment and talk about what stars use. The occasion was given by “Captain America” Chris Evans, who on his Instagram (banned in Russia) dramatically said goodbye to his iPhone 6s. The actor noted that... Read more

POCO X4 GT is the second novelty of the brand today. She replenished the X4 series, previously represented by the X4 Pro model. The basis for the positioning of this gadget was the power of the hit pre-flagship MediaTek Dimensity... Read more

POCO has finally unveiled two of its potential hits – POCO F4 and POCO X4 GT. While voicing the price tags, the company has traditionally revealed the list of partners who will replenish their range with these two new products.... Read more

Huawei continues to update its lineup pointwise. This time, the Chinese are preparing a new representative of the Nova series, which OnLeaks and its partners kindly told us about. Below you can see a selection of high-quality renders of the... Read more

OnePlus Ace will continue the parade of low prices on AliExpress

OnePlus Ace has become an unusual brand newcomer not only due to naming, but also thanks to the MediaTek Dimensity 8100 chipset, which has become a breath of fresh air for fans of the pre-flagship segment. In addition, the gadget... Read more