Skip to content
Home Technology The features of the chipsets for the Ryzen 7000 were revealed: the older X670 is made from two medium B650

The day before yesterday, at the opening of Computex 2022, AMD introduced the Ryzen 7000 desktop processor family and the 600-series chipsets for them. As it turned out, these chipsets are developed by ASMedia, and their design uses a modularity similar to the chiplet approach to processor design. 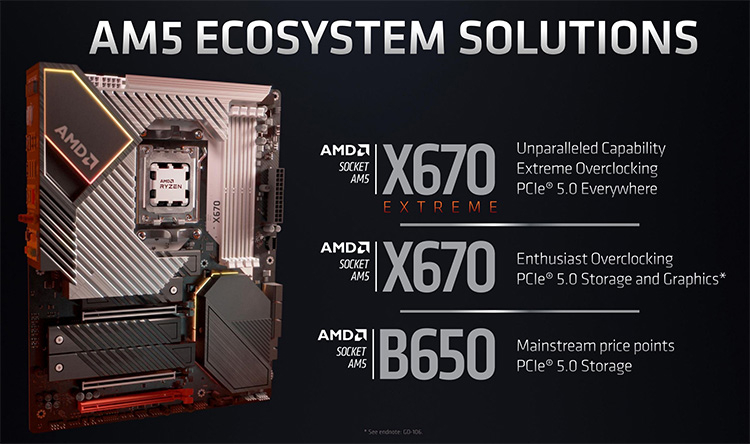 AMD has announced the existence of three chipsets for the upcoming Ryzen 7000 series desktop processors: the ultimate X670E, the flagship X670, and the mainstream B650. The first two chipsets on this list are the same solution with purely marketing differences. X670E-based boards will be richer equipped and will allow the installation of two video cards at the same time, and in X670 motherboards, AMD will prohibit the bifurcation of the PCIe x16 bus for graphics accelerators and allow not implementing PCIe 5.0 support.

The Angstronomics website shared details of what features will be inherent in the chipsets for the Socket AM5 platform. The source reports that this time AMD has completely relieved itself of the burden of creating chipsets, and the X670, together with the B650, was developed by ASMedia. This allowed her to implement an interesting scheme: both chipsets use the same chip with the code name Prom21, but X670 uses two such chips at once. In fact, this means that the X670 has twice as many ports and PCIe lanes as the B650.

The B650 chipset, consisting of one basic Prom21 chip, supports the PCIe 4.0 x4 bus for connecting to the CPU and eight PCIe 4.0 lanes for connecting peripherals and implementing expansion slots. It also includes four PCIe 3.0 lines that can be reconfigured into SATA ports, 6 USB 3.2 Gen2 ports (paired into USB 3.2 Gen2 × 2 with a bandwidth of up to 20 Gb / s) and 6 USB 2.0 ports.

As the source notes, the use of modularity to build chipsets allows you to solve several problems at once. First, their design is unified and flattened, which facilitates development and reduces the cost of production. Secondly, motherboard manufacturers get the opportunity to reduce the length of signal lines, which can be a critical factor in the implementation of high-speed ports. Thirdly, the problem with the heat sink is solved. The TDP of a single Prom21 chip is 7 W, and X670-based boards with two such chips moved away from each other are quite capable of using passive cooling, which would be difficult to achieve if all the capabilities of this chipset were implemented in a single chip.

Also in the Angstronomics publication it is said that AMD will subsequently introduce a cheaper A620 logic set into circulation. It will be released a few months after the release of the first representatives of the Ryzen 7000 series and will be based on the same Prom21 chip. However, it is assumed that AMD will reduce the number of PCIe 4.0 lanes to four in it.

Zen 4 architecture Ryzen 7000 processors and Socket AM5 motherboards with DDR5 memory support are expected to hit the market this fall.