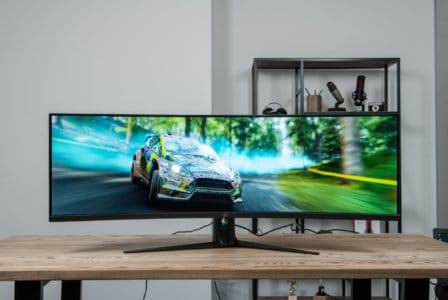 “There can’t be too many diagonals” – it seems that this is the rule that manufacturers of gaming monitors are guided by. No one will be surprised by 34-inch models, but 49 inches is still exotic. Today we have one of these “giants” on our review – ASUS ROG Strix XG49VQ.

The monitor is as much as 120 cm wide – so it will most likely take up your entire computer desk, and if you are used to keeping it on the table, there will be no space left for the system unit. In terms of design, in general terms, adjusted for dimensions, it looks like a typical model from the ASUS ROG (Republic of Gamers) line: a large (heavier than some conventional monitors) stand with a “three-legged” base, black matte plastic, frameless design of the front panel. Of course, there are frames, they are just covered with protective glass and are practically invisible when turned off. After switching on, they appear and turn out to be quite wide – a total of 10 mm, if you count together with the edging of the case. However, with such a diagonal, even 1 cm near the frame is subjectively perceived as “very thin”.

The leg allows you to adjust the height of the display above the table, rotate the screen left and right and change the angle of its inclination; under the leg is hidden VESA mount 100×100 mm for mounting the screen on the wall. All connectors are concentrated in a niche in the lower part of the case, which, after connecting the cables, can be covered with a decorative panel. The cables themselves are passed through a special “window” in the leg, there is no way to disguise them. Of the video inputs, there are two HDMI 2.0 ports and one DisplayPort 1.2, there is also a USB hub for two USB 3.0 ports (the second is located on the bottom of the monitor, to the right of the joystick) and a minijack for connecting a headset. 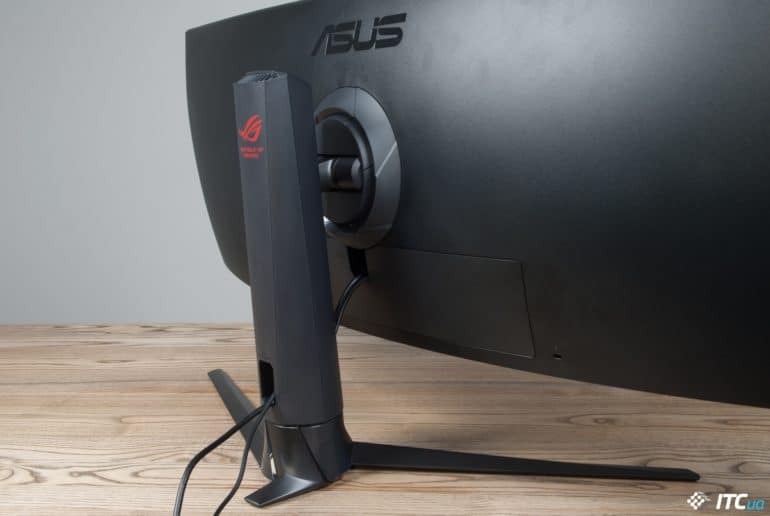 To control the monitor, a four-way joystick is used, located on the bottom edge in the center, under the ROG logo, and two buttons on its sides. Pressing any of the controls brings up a quick menu – from it you can go to the main menu, select one of four parameters (by default, this is the choice of video input, the volume of the built-in speakers, the GameVisual video mode menu and the GamePlus game settings menu, but the user can change this list in monitor system settings). 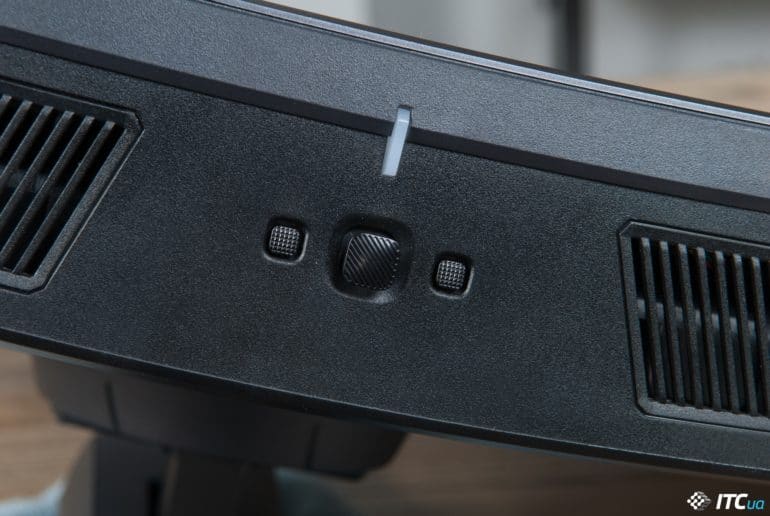 These two sections are the first items of the main menu. They are followed by “Color” – adjusting the brightness, contrast, choosing the gamma and color temperature, and the image (enabling overdrive, FreeSync, HDR, highlighting shadows, etc.). “PBP settings” allow you to display an image from two sources at the same time, in the “input selection” you can manually switch to another video input, “system settings” as expected contains system parameters – sound settings, on-screen menu, USB hub operation mode, information about the current video signal and so on. 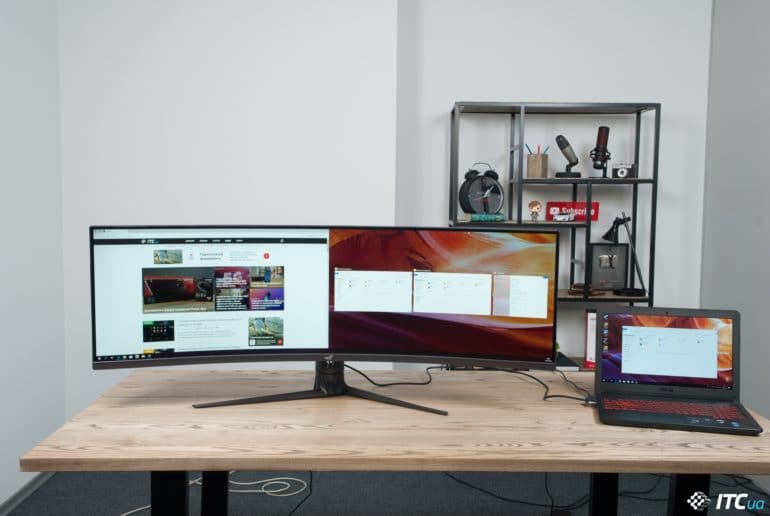 With such a diagonal, of course, no one will open applications in Windows in full screen – unless it is specialized software like video editors; the most convenient mode of operation would be to place windows next to each other so as not to switch between them by alt-tab. With the usual distance to the monitor, the “working part” will be only the central zone, which occupies about two-thirds of the entire screen – the edges are already in the area of peripheral vision, and in order to perceive information over the entire image area, you will have to turn your head. Plus, after all, the VA panel does not have as good viewing angles as IPS, and looking at the edges of the screen with a typical user position at the computer will fall at a rather large angle, and the image there looks noticeably less bright than in the center. 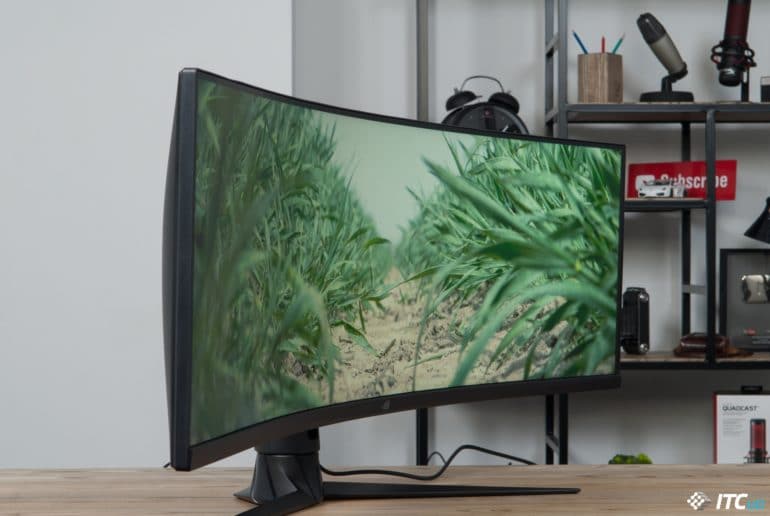 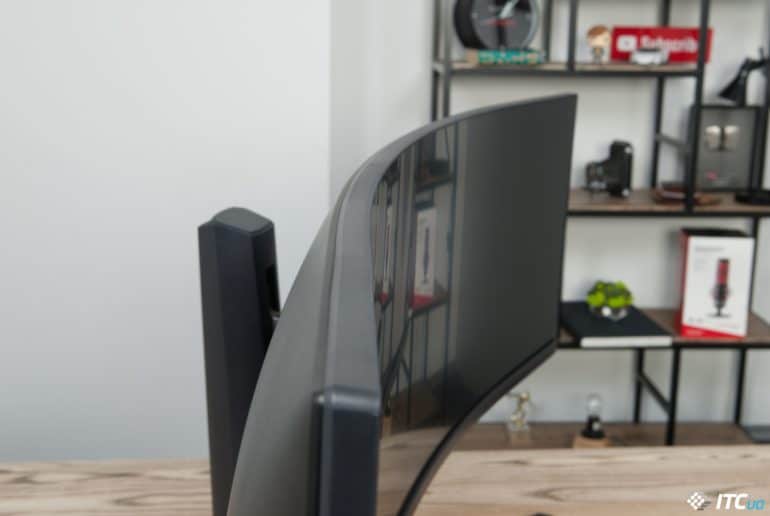 However, if you move a meter away from the monitor, the situation changes dramatically – firstly, from such a distance, the low pixel density is no longer felt, and the entire image is in the comfortable viewing area. So it’s better to play games from this distance – for example, leaning back in a chair with a gamepad in your hands, the immersion effect will be comparable to a good movie theater. The same can be said for watching videos (if you can find videos in 32:9 format – after all, even modern movies are shot at 21:9 and are displayed on this monitor with rather large black borders on the sides). 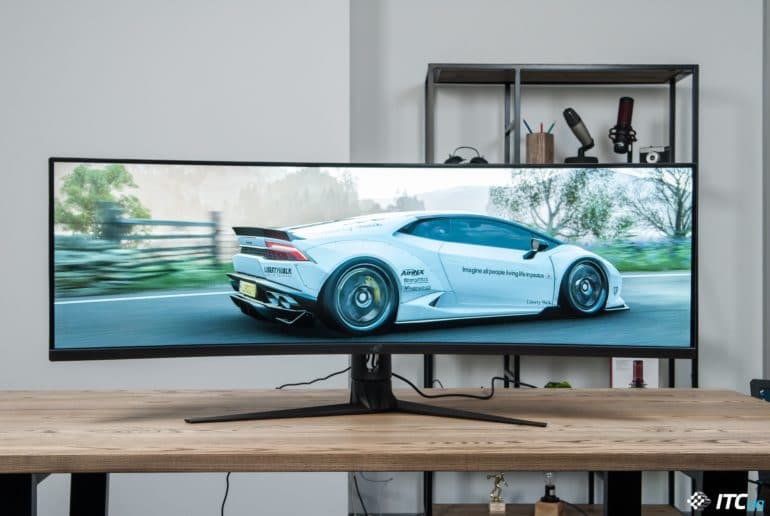 The screen refresh rate of the ASUS ROG Strix XG49VQ is 144 Hz, AMD FreeSync 2 adaptive frequency technology is supported, there is HDR support – compliance with the VESA DisplayHDR 400 standard is declared. This is the basic certification level, its requirements include a maximum brightness of at least 400 cd / m², honest 8-bit color (no FRC), wider color gamut than conventional SDR displays, and global dimming (local is a requirement for higher certification levels).

Response time – traditional for VA matrices, 4 ms (GtG). Apparently, this value is for an already overclocked panel – in the monitor settings there are overdrive controls, 5 different degrees of overclocking and the ability to turn it off completely. At the first two levels, the sharpening of moving objects is minimal, the effect becomes noticeable from the third level. On the fourth and fifth, overdrive artifacts appear in the form of dark or, conversely, light trails, so we would recommend setting this parameter to a value no higher than three.

The ASUS XG49VQ uses a semi-matte screen finish. It looks like a normal matte at right angles, but gradually becomes glossy as the viewing angle increases. Such a coating allows you to almost completely get rid of stray glare and reflections, and at the same time, the image practically does not suffer from the crystalline effect caused by the anti-glare coating on conventional matte displays (it looks like a slight graininess in plain areas of the image), which can be seen in the macro image. Also here you can see the pixel shape typical of VA panels. 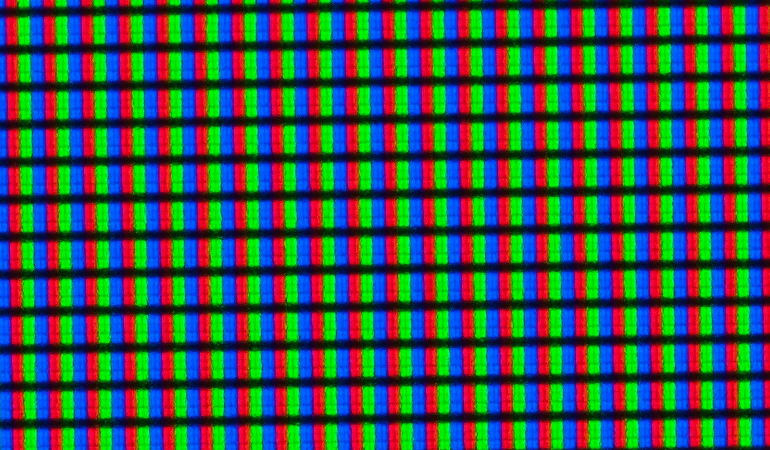 The uniformity of illumination, as for such a diagonal and proportions, is very good. Yes, in the test photos you can see slight light spots on black, mainly in the lower part of the panel, but in reality, even in a dark room, the black background looks noticeably more even; in the normal mode of operation, nothing of the kind will be noticed behind this monitor. 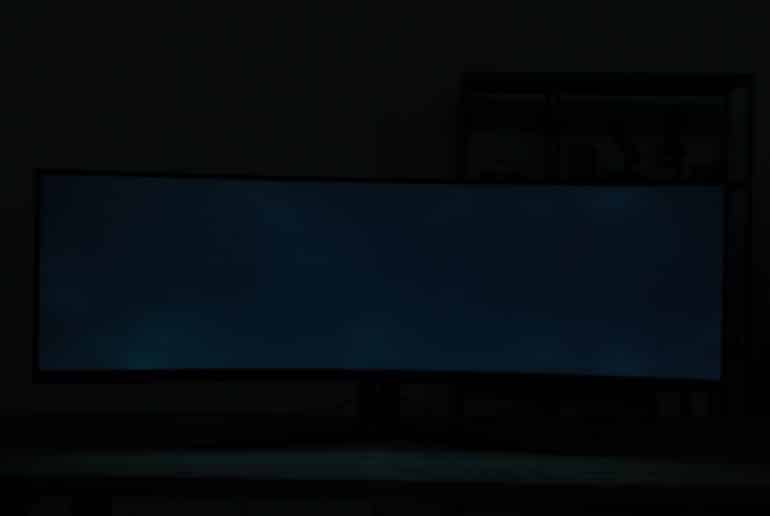 The ASUS XG49VQ has practically no glow effect – thanks to the VA panel, which in this regard looks unambiguously more advantageous than IPS. So, when viewed from above from different sides, a slight purple light appears on a black background, but it is much weaker than that of monitors with IPS panels. Another advantage of VA, by the way, is deep blacks without a hint of glow and a much higher contrast ratio (about 3000: 1).

Viewing angles are quite good, though not as good as IPS monitors. So, with a large deviation, the brightness and contrast are noticeably reduced, the black color noticeably “grayish”, the colors become less saturated, and the white color has a slightly lukewarm tint.

The minimum brightness of this model turns out to be at the level of 60 cd / m², which is a rather high figure, especially for such an area – so it will not be very comfortable to work behind this monitor in complete darkness. Maximum brightness (average value measured at 35 points) – 360 cd / m²; the brightest area was the center of the screen, where this value reached 420 cd / m².

In the monitor settings, there are several pre-set image modes, including several special gaming ones. In sRGB mode, all manual settings are disabled, including brightness (it is set at 150 cd / m²), while the monitor shows an underestimated gamma and a fairly wide color gamut – for some reason there is no artificial limitation to sRGB space.

We would advise for normal use of the monitor to stop at the “custom” mode – in it the image is a little colder, but this can be corrected by adjusting the color temperature, but the gamma value turns out to be much closer to the standard, plus all image adjustments are available.

During testing, one unpleasant nuance came to light: the inclusion of FreeSync noticeably narrows the color gamut – to the level of sRGB, or even less; as a result, colors begin to look perceptibly dimmer. We hope that this obviously software “glitch” will be fixed in the next revisions of the monitor.

Game modes are for the most part designed to bring out the details in the shadows and emphasize the game picture; the “cinema” mode for some reason greatly overestimates the gamma, making the image deeper and more saturated, but at the same time the picture becomes noticeably colder, plus details are lost in dark areas.

Conclusion: ASUS ROG Strix XG49VQ is a monitor for those who need the maximum gaming diagonal. The aspect ratio of 32:9 shows itself very well in racing and shooters – the picture at the edges of the image is already perceived by peripheral vision and contributes to immersion in the game world. The image is saturated and contrasting, color accuracy is more than sufficient for the tasks that this model is focused on. The disadvantages include the high cost and relatively low pixel density, which is why they are quite clearly visible from the usual (about half a meter) distance.