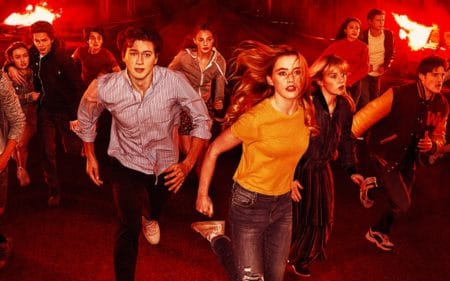 Plots about growing up teenagers have become the basis for many popular Netflix projects. The series “The Society” (The Society), which was released in early May, was no exception. In some ways, it still differs from other series – in it, teenagers find themselves cut off from the whole world and, in order to survive, they create their own system of social order.

The Society’s showrunner was Christopher Keizer (who worked on the hit TV series Party of Five in the 90s). He was inspired by the idea of the novel “Lord of the Flies” and came up with a more modern story about the situation in which teenagers have to build a new society. They, in an attempt to prevent chaos, will launch a struggle for power.

The beginning of the series shows the American city of West Ham, whose inhabitants are haunted by a strange smell. While City Hall tries to fix the problem, all high school students are sent to the campsite. Due to bad weather, the road is blocked, and buses with schoolchildren return to West Ham. There is no one there but them: all the houses are empty, the adults have gone somewhere. They can’t understand what happened or call for help, they can’t leave the city, they can’t access the Internet either. The only thing left is cellular communication, which works within their settlement. After enjoying the first moments of freedom, many panic. Over time, it becomes clear that teenagers will have to establish rules of engagement if they are to survive and distribute food supplies.

The series attracts attention with an original idea (although it evokes some parallels with Lost or The Leftovers). From the first series, the scriptwriters leave the viewer with dozens of questions about how and for what reason the characters ended up in complete isolation from the world. But the most interesting accent of The Society is the line about building a society by those who, until recently, have not yet thought about how it should function.

Among the heroes of The Society there are quite typical representatives of different behaviors – a rich guy, a popular girl, a school president, an outsider, athletes, etc. This standard set of characters is revealed here from a new angle, raising the topic of civil law. Teenagers discuss whether there can be a law on private property in a critical situation. Moreover, they will have to face authoritarianism and make decisions about whether to maintain order while giving in to their comfort.

Despite the serious posing of the problems, The Society is still a series about teenagers. Therefore, after an intriguing beginning, the plot begins to revolve around relationships. Sometimes it turns into a series of boring dialogues and not always logical actions. However, there are some strong moments in the series in which the characters have to solve the dilemma of whether it is possible to deprive a person of freedom or even life in order to restore the system. For the sake of this, it is worth enduring the protracted development of events that episodes in the middle of the series will sin.

There are many active characters in The Society, but they can be remembered quite quickly. One of the main roles is played by Kathryn Newton, who appeared in another May premiere – in the film Detective Pikachu. Also in the cast it is interesting to see the deaf artist Sean Berdy (played in the TV series Switched at Birth). His lines are voiced by actress Gideon Adlon, who plays Birdie’s character’s girlfriend. In order to make their dialogue look natural, Adlon learned to use sign language before filming.

The series The Society has an obvious minus. The plot is based on science fiction, which immediately entices with a desire to find out how teenagers ended up in isolation. The showrunners avoid these themes for most of the series, focusing solely on social issues. By the end, the writers still return to the main intrigue, but only in order to make a hook for filming the second season. I would like to believe that the creators from the start of the project know where they are moving the story and how to explain all the secrets of the plot. Otherwise, the continuation of the series will turn into a soap opera with an ambiguous interpretation.

Otherwise, The Society stands out from other series. It’s not often you see teenagers arguing about the advantages of capitalism over socialism. Or they build a dictatorship, while wanting to return to democracy.

Pros: a plot built around isolation in the city; episodes in which the characters re-imagine how their society will function

Conclusion: if the series received a continuation for the second season, it would be nice. It’s not likely to be a big hit, but it does have some interesting moments.